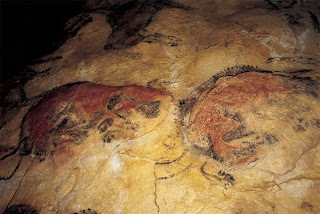 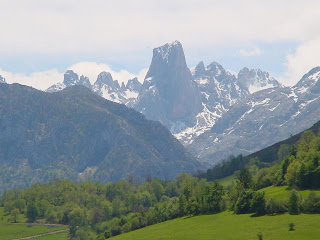 Jes' cain't say how gorgeous this little jaunt has been--mercy but this heah is a lovely country--an' the  weather is perfecto.   Spent two days in these heah Picos de Europa, even took that lurching cable car thang to the top of a peak. Once is enough. Oooh, dawgy.  An' would y'all believe thar's still snow up thar?

From cable car heights to bowels of the earth in a massive cave--now thas' a juxtoposition fer ya'.   That cave is a lesser visited one than famous Altimira --but at least ya' go in the real thang (Altimira closed to regular folks). It is impressive once ya git over makin' like a bat--cain't see in the pitch black, water drippin' ever'whar....but when the guide flicks on the high beam--astoundin'!  Literally cavernous.  Why a whole city of cave folk could live in it--an' maybe did. Doan know if it be fanciful or no, but they say life were good fer 'em heah so them cave babies flourished. Anyhoo, the paintings be shockin'ly good--how the cave dwellers  used the natural bulge in a rock to simulate the concave body of bison or caballos. The detail  be astoundin'.  Claim is the artist(s) used hollow bird bones as a straw through which mineral powder be blown into the rock as outlines of images.   Also--can ya' credit this?--the artists built scaffolding to reach the higher rock canvasses!

I'se travelin' wif'out the paraphernalia fer sophisticated communication -- please hang on fer mah own pictures --will return after a spell.

How's all y'all ?  I see Sir Karl the Fair is hostin' Haiku Monday this week. Congrats on yore win, KF, an' what a champ to kick up a storm of a theme. Heh.

whoa aunty that second photo jes aint real! I cant wait for you to get back

1. because I want to see all the pictures and hear about it and
2. i heard a mindblowing radio show recently and I cant wait to discuss it with you. bunch of stuff about Malachi.

Yup awesome photos! Ya know how to travel!

Splendid. But... do you think you might be taking the notion of looking under every rock and over every mountain just a bit too seriously? Did you find what you are looking for? :p

I look out my windows at my own version of the top pic, but you can have the caves. Other than the one I live in. Still, I'm almost guessing no place is as beautiful as home? Maybe I traveled so much that I forogt about a home, so that finally having one means more to me though.

Uhrm, have you, by chance, eaten anything to make a foodies heart squeal with delight? Sorry if that sounds... pushy.

I wish I could try to climb that high Mt. on the second pic. LOL a dream of an old fat man.

I love cave art. Altimira...wasn't that a song by Johnny or Edgar Winters?

Splendid! Are you back?

Huff puff...headin" home soon. Hope Y'all is doin' well. Will be back in gear by the weekend--loved all yore comments.