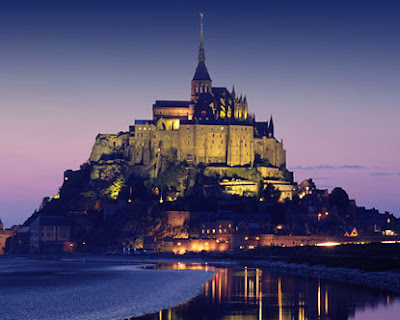 Akshully, I'se a nervous wreck--always seem to box mahself in wif' work enough fer any three humans right before time to leave--two articles an' a speech write an' deliver.

Issue: shoes--yep, the ugly flats arrived an' they's UGLY. An not that comfortable. Grrr!

I has deadlines so I oughtn't be peekin' at all these French blogs--but...I'se weak. I admit it.

will visit heah--a country house known fer it's vegetable gardens an' orchards--guests eat from the land.


I'll be beddin' down heah: 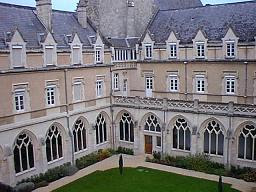 This English transplant to France ( below) lives the idyllic life--or so it seems from the perspective of blogworld: 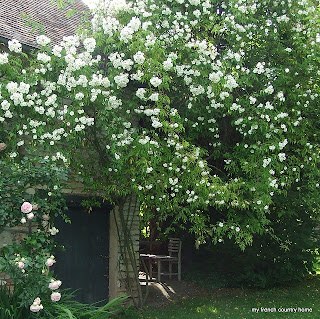 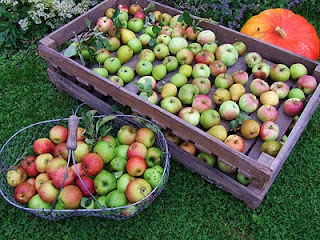 See more of her reverie in Normandy here:


Nearby, I'se also gonna make a return trip to this lovely hidden abbey: 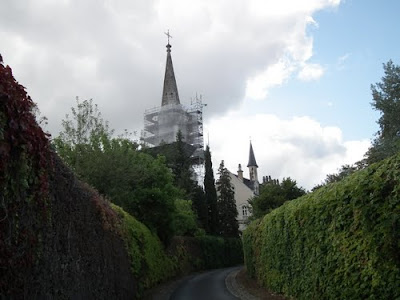 An' I'll take this picture --up the road to the abbey--to see iffin' the bell tower is complete now.


I found the above link here--an' iffin' youse charmed, buy her book, I have two of 'em an they's treausres!


Huff puff--one article down, one to go, speech to write--yikes!!

Will be scarce this week visitin' all y'all--hold fort!
Posted by Aunty Belle at 3:07 AM

If ya had jes' one day in France--what would ya most want to see?

You do pose some ponderers, Aint B. My first thought, seeing as how Passage to Marseilles is one of my favourite under-famed movies, was something in that area. Notre-Dame de la Garde, perhaps, or the Abbey of Saint Victor. Or maybe Château d'If, mentioned in Twain's Innocents Abroad, and the neighbouring islands of Ratonneau and Pomègues. OTOH, reckon I'd be pleased to set foot on the beaches of Normandy.

Re the 'Reb II'... Sugar, if I'd been anywheres near WH, I'da hollered. Just found that ol' picher and thought of ya. Kinda makes me wanna grab a bag o' chicharones an' go fishin'. ;]

But--I doan know that movie Passage to Marseilles, goody, something to look forward to.

lordy what a question. where do i not want to go? i reckon i'd bypass paris this time around. i've been there plenty of times. ... perhaps mt st. michel, the loire valley, giverney .. i know .. all touristy, but beautiful ...

oh, how rude of me .. i forgot to wish you bon voyage and have fun! and congrats to uncle on his win!

Mebbe the question fer ya is WHERE IN PARIS would you suggest I be sure to go?

Thanky fer congrats to Uncle--he is puffed up like a pigeon.

Family spent three weeks in France 11 years ago, mostly outside of Paris. I don't know enough about the country to know what I haven't seen, but I'd love to go back to Cassis with a little more time on my hands . . . and my 20-something son in tow, who's now pretty fluent in French.

And for us, Marseilles was just a place to pick up a rental car. I don't mind crazy cities, so some time there would also be nice.

If I had longer, I'd love to see the monasteries of which you speak. At this point in my life, I've got a hankering for some serious solitude -- no offense intended to the czarina.

Where in Paris? Just for strangeness, the catacombs.

what's the name of that fantastic gothic church with the henri de miller head sculpture on it's side infront of it? i think it's in the les halles neighborhood. hang out there on a pleasant night on one of the benches. it's lovely ... and peaceful. of course, if you are into gothic cathedrals, the whole church is pretty awesome.

I Love these references!
I will be in France in October so am in the final research throes. Thanks

Nothing wrong wif' the tourist stuff--jes' the time of year that ya go--I'se followin' that trail:
Giverny, Mont St. Michel, Loire, then south through the Dordogne, a swing through the forgotten Aveyron cliffs an valleys... but now, I should save some surprises in case I can blog some of this.

Oh! You mean St. Eustache? I'se gonna do it! Never did stop to look inside that purty church--an I need to git up to St Denis too. Thanky--, but ha, hey, ya' wanna come along--would luv yore company!!

Czar,
Czar Jr is fluent? Oh then youse in high cotton when next ya sally forth. Three weeks--what a luxury.

As fer solitude--no foolin' now, Aunty did spend a good retreat--solo, absolute silence, vegetarian, up at 1 am, 4 am for the hours--at Abbaye Notre Dame de Senanque. Cistercian. No frills, all quiet an' bliss. Extensive library of ole manuscripts--you'd love this place--The sole embellishment in the austere church is ruby hued, Russian Icon of the Virgin an' Chile'. Cloister pillars that have received the hand caresses of a thousand years.

i would love to go!

(Uncle ain't along on this trip, so I'd be thrilled fer yore company.)

How exciting, Aunty! Although I know exactly what you mean about work before play. My own lift-offs are always book-ended by worries over deadlines. We self-employed are lucky in some respects; in others, we will never know the luxury of the kind of vacation time afforded to the 9-to-5ers.

If I were to go back to France, it would be the Cote d'Azur. I have family friends who live in Cannes and the last time I could actually get away for a good chunk of time, I spent three wonderful weeks living in their guest house and exploring the region. I loved it. The "Ciao, Baby" Mediterranean lifestyle suits me to a T.

Have never been to Cote d'Azur--insane, I know. Never made it as far as Cannes (or heh, Monaco) an' woan git thar' this time either--well....if the world ain't jes' plain melted into a puddle next few years I may try to go again. (If thar's a nickle left in mah mattress.)