did y'all see this ? 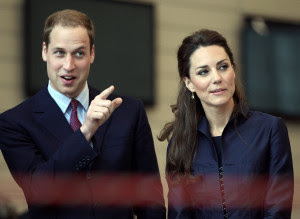 
Well, I jes' doan know yet--if I has a touch of insomnia, I may watch.

Sorta curious about the anti-dress thang--ya know, not as fairytale voluminous has her predecessor's. Still I'se thinkin' it will be quite memorable in its own right if it is indeed the handiwork of Sophie Cranston of the Libélula label. (oops!) Sarah Burton of Alexander McQueen.

Well now, iffin' of any of y'all do watch, Aunty does wanna hear yore thoughts on the whole hoopla. Surely Pam OKC is weddin' central on this side of the Pond?

We all hope this young pair has a much happier life than his mama. Let's pray Wills has had enough of his daddy's poor behavior --an' has his own resolve to do much better, less his own chillen's be victims,too.

I shoulda worked in the dog pen garden today--it were a lovely mornin'. I went out when the dew was still glistenin.' 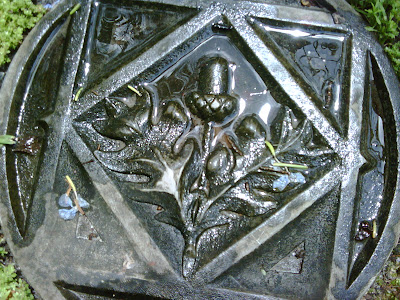 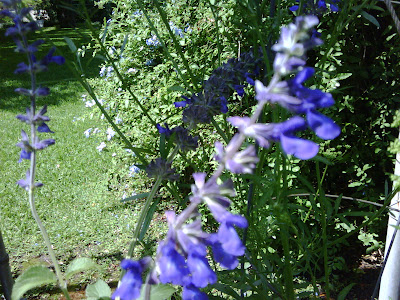 But I had wanderlust, so I headed up the road a piece in search of whatever I might find.


Winding up the back roads, through the oak hammocks, threadin' the lakes around Cross Creek is always a diversion. I seen some of "ole florida" that ain't seen by many folks no more. Took the jog off west, to to Micanopy, to prowl the used book emporium --it were closed 'cause Mr. O'Brisky found hisself a poker game (accordin' the the lady in the shop next door--thas OK, since she an' me had a real good jaw an' she had Vickie Archer's recent book, which I of course bought so I could do mah penance fer dis'in' the French ....see prior post).

But I need to apologize to y'all, cause I did not think of all the bloggers! I din't take a camera along. That makes it real hard to share the quirky back road day. Drat! I did snap a few phone photos, so I reckon it will make do--cause ya' wanna see how incredible an every day Florida cloud can be... 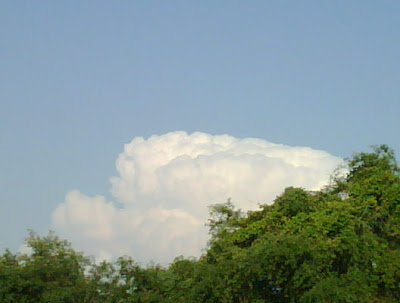 Looky! Heart red strawberries --I paid too much fer 'em: A woman an' her daughters wuz sellin' these luscious gems from the back of their van. NOW what shall I make wif' all this sweet juicy red bounty? I hope ya have a gran' weekend.
Posted by Aunty Belle at 6:41 PM

Labels: French essence, wanderlust, Weddin' day for a princesss to be

And a fine weekend to you, Aunty! So glad to have you back.

I’m with you on the insomnia thing. If I wake up at 4:00 a.m. and can’t go back to sleep, I’ll probably find a channel that’s carrying the royal wedding festivities in the hopes I’ll nod off. But then I’ll be off to work and won’t care a whit until they rebroadcast endlessly (in the event I can’t sleep tomorrow night, or the next, or the next).

Sadly, I was more glued to the TV the night Princess Diana died (ahem, insomnia) than when she was married. And I still squirm at the thought of British royals after my first magazine job in NYC (at a now-defunct publication once famous for its paper dolls). Amongst my duties, I was tasked with translating articles about the royals from Paris Match. And my first bylined piece was a sidebar about the line of succession when Di was preggers. I had to call the British Consulate twice to ask about all the possible scenarios, and they clearly thought I was an idiot.

How has this little Prince grown up so quickly? I can only wish these new royals a long and happy life together. Without paparazzi and other pressures mucking things up.

The Pudge and I usually watch the news at 6:30AM when we go down stairs for breakfast. This weddingg was on all the news channels, so I told The Pudge to put on what he wanted. Thanks to the royals, I was watching - Sponge Bob. That's all I have to say about that.

The last wedding of paid attention to was my own. And frankly I would've been just as happy to go straight to the reception. (a party that still lives on in the minds of many)

I do hope that the royal couple can avoid the legacies of their parents and avoid being tainted by all the media.

As far as those strawberries, save a few for some strawberry scones, a favorite breakfast treat.

I did remember that your part French. So am I in a muttish way.

Hell no! And I'm fairly sure they pre-empted Red Eye for this crap.

idolatry! no. no and no. I have straws too!! and arent they tastier when theys home grown? beautiful yard aunty. how you holding up over there? i wept for my mama yesterday in the field.

I totally don't understand royalty adoration.
But then I don't slobber over pro athletes, actors, or actresses, and the like either.
I think I am deficient in the "fawning" gene.

You could make "something" with those beautiful berries, mais ils sont mieux nu.

Yep, you know I was watching. I love the history and the pageantry and think the Brits do this better than anyone else. As far as being royal-obsessed -- I'm not. But I appreciate that this is the history there so why not go with it? I'd rather watch these real people having a wonderful wedding than Snookie or Real Housewives or Paris or Lindsay, etc etc etc.

I know there are real discussions about the future of the monarchy, but that is best left to the Brits. I have found that the Brits can criticize the Queen and the royals all they want, but if an American does it ... look out. The Queen is "Theirs" and they don't want some upstart American saying anything bad about her. Sort of like you can complain about your own crazy aunt, but don't let anyone else complain about her because that might get you beat up.

And every once in a while something comes along to unite a country ... here we had 9-11. There they had a royal wedding. I'd take the over-the-top wedding ceremony procession any day.

P.S. (Wishes I had been at Karl's reception.)

BuzzK,
ya always make me laugh. Sponge Bob mayhap is similar commentary as some thar'll be on this shindig.

Karl,
I'se wif Pam OKC--we wanna come to yore reception--when is yore next anniversary? Could stage second act. What ( other than yore bide) wuz most memorable about this legendary reception?? ( went to one weddin' recently but left too soon--afore the groom out danced some famous group or 'tother--does ya dance, Karl?)

Troll!
Puhleeze, will ya tell me what this red eye thang is? Moi mentioned it too, but Aunty be in the dark. Anyhoo--maybe it's fair to preempt since fer years the dang football games went into overtime and preempted whatever I had hoped to see.

Aw, Sugar, I knows ya miss yore Mama in ways ya din't expect. I could say a lot of purty thangs, but truth is, it's jes' gonna hurt fer spell. I keep replayin' the las few words I has on mah phone jes to hear Granny's voice. The loss is big. No way round that. One good thang, ya had a grand relationship, an I know thas' a comfort, Pup.

Heh. I hear that. I fear I's jes' as irreverent towards hollywooders, music "stars" or athletes. As fer nekkid berries? Uncle is partial to berries wif' a wee bit of crème anglaise....about a washtub full.

heck yeah! I git that--I can anythang 'bout Crackers, but let some yankee say it, an watch the mercury rise.

I ain't a royalty follower, but will admit that fer the Cousins, I think this is a good thang--it IS their history, their foundation, an' a sort of social glue fer all the folks. An it is a "jolly good show."

I know Granny would have luved seein' all the pomp. The chillen's all gussied up an' such. Granny wuz a fashionista in her time, an' would have been excited to see what all folks wuz wearin'.


Must say, the Queen herself is pretty kool--she be 85 an' quite spry. A neighbor lady say that the tabloids luv "Our Kate" but think Kate's mama is a Not Our Sort. I ain't been to the grocery yet this week, so I ain't seen no tabloids.

What was the most memorable thing that's hard to say. It was a fun time, a raucous time and yes there was lots of dancing, singing too. We were on a shoestring budget and with the help of family and friends, a party was put together that just had the right chemistry.(Granted a lot of that chemistry was CH3CH2OH) Yes, I still dance whenever I can.

Oh and the girl in the purple dress with the lace up sides was a big hit. Although I didn't pay attention to her. I was with the belle of the ball.

I watched.
It was a fine , unobstructed view/tour of some of England's finest architecture! And frankly, I loved, loved, loved the tress brought into Westminster Abby.

My prayer is this couple will lead many of today's youth back to solid Christian marriages.

Lord those strawberries look lush.
Glad you had a wandering day, sometimes those are my favorites.

I saw the video and one of my friends from a photo site was up at the Abbey a week or two prior to the wedding and had been talking to this verger. So fun, what joy. The thing went off without a hitch, so why not do cartwheels down the red carpet?

I got store-bought berries in the frig, but you can almost taste those fresh picked ones of yours just lookin' at the picture. :o)