Merry Merry Month of May 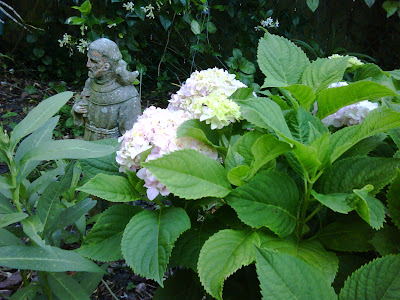 These is late afternoon hydrangeas. In the early mornin' I'se wont to go dew -dancin'. May has come a'callin'. The air is soft an' sweet.

What does ya'll see when ya' step out yore own back door early mornin' in May? 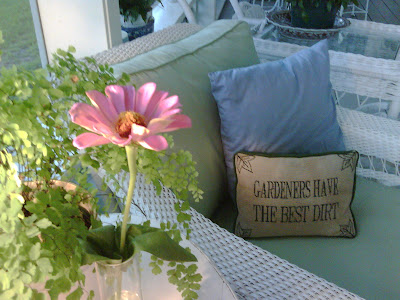 That rocker over thar' is mah favorite, have a seat in it an tell us'uns somethin' about yoreself that will surprise us all! ( like Karl done when he said he had a blow out of a reception)
*

Labels: binladen is dead, girl is wed, now can we git on with other stuff

Once this story broke I thought the build up to this might explain the sudden shift with Gates and Petraeus.

In this ,the second day of May, I will be outside, on my knees, doing battle with some horror plague attacking the Courtyard garden. The opposite of your pillow sentiment. This gardener does not have the best dirt :-(

Not exactly the celebration I had planned for my 30th anniversary as a Ringling graduate.

A happy May to you.

Out my back door: Mallards, the return of baitfish and hopefully the return of the Green Heron that roosts on our aft dock lines.

Secretary Gates has been planning to retire for a while now. Moving Secretary Panetta to DOD is right in line with the administration's way of doing things. Moving General Petraeus to CIA as a logical progression.

None of this really have anything to do with the events of this weekend. Other than the possible outside chance of using Gates as the scapegoat for not getting permission from our so-called ally to go in and get him.

My back door/yard finally has the outside tent up, lights rewired into place and the fountain is cleaned out and running (whew!) I think we have the same St.Francis statue. :-)

Out my backdoor, I see a mown backyard thanks to Emma.
... and 25 datil pepper plants that need transplanting in to big pots.

V has finally succeeded in growing grass!!!! he "understands" it now and will attempt to do the same in the front yard. of course, i played a huge roll in this by keeping the plow like feet of the dogs far far away as the tender shoots established themselves. we have a praying mantis egg sac that i hope hatches soon, we have baby robins in the holly near the chicken pen and we have chipmunks at the birdbath.

about OBL. i have to say, i am somewhat disheartened by the fist pumping and go america celebration associated with this event. Remember the muslims ululating after 9-11? i dont want to be like that. its grim business and really isnt fitting for merriment. Now that the boogey man is gone, can we send the navy seals into the corrupt offices of the financial sector? how about roll back DHS? Patriot Act? the TSA?

Amen to Chickory's: about OBL.

I would take to the streets to make merry if we sent the Seals after the bankers and politicians!

The Mrs likes to garden and I bought her a T-shirt that says "Plays in Dirt". She still wears it.

@Chicky - I kind of agree with you that the celebration of an execution really isn't (shouldn't be) what the US is about. But I haven't seen anyone burning effigies, flags and blowing themselves up. We can't let our guard down in the least - especially now. Hold on to your butt because I think the retaliation is going to get ugly.

Outside I see flowers that were blooming when I left Friday morning now brown and wilted because of a surprise snow and 20 degree drops in evening temps.

I found myself feeling singularly "meh" about the news that OBL is dead. I mean, it's good news, but it DID take us 10 years to get the dude. I agree with Chickory that it's grim business and no cause for whoot whoot. More like, "now what?" He's dead; but radical Islam is alive and well and coming for us all.

what to i see out my back door?
well, let's just put it this way and in the words of the estimable
sir gerald manly hopkins:
.... "Long live the weeds and the wilderness yet."

and i do think i'll sit a spell on your front porch rocker.

Sadly, out my back door is an ever-growing sea grass in a morass of mud puddles. We’ve had only about one dry day in the last two weeks. Made the record books for rainiest April ever, and were less than a quarter inch away from rainiest month ever. Tired of gloomy skies and flood warnings. But at least farmers market season is starting here :)

Youse a fair analyst, I'd say. But then a lady on her knees in the dirt has lotsa time fer analysis, I reckon. At least when you grub about in the dirt, ya' git ginormous amounts of roses!

Congrats on 30 anniversary of graduation.

Now I'se real curious--headed to the net to research green heron--only knowed of the blue hued bird. An youse a keen analyst too, I see. Blogger folk ain't immune to the lay of the land.

Oh mah heavens, that do sound so purty! What ambiance that must create. We have the same St. Francis? Awww, I'se charmed to think we's kin at the core.

Heh--that Emma of yores, she is on a streak, ain't she? And the datils? When I see smoke risin' up yore way, I'll know youse harvested the nukes. Hahahaha.

Kudos to V-thas' an accomplishment. Nothin' is as soothin' as lush emerald grass. But the prayin' matis? __please take video of hatching fer us--what a show that will be.

On OBL, amen, mah dear. No gloatin' America--jes' git on wif' bidness, be serene an' quietly move in on the other nests of scorpions.

Karl,
uh huh....BTW, ya think mebbe the Paki's have it comin'? Who believes they did not know OBL wuz thar'?

thar's a mission I'de like to see wif' surgical precision--git them Ponzi boys, but doan rattle our IRAs.

The MRs. Buzz is a gardener--I recall that. Smart lady. Clever shirt. As fer not burin' effigies, thas' true. But even lower key might me wise--as ya note (truly, I fear) thangs could git ugly.

Moi,
What IS IT wif' this snow stuff this year? Mercy, but it ain't OK to snow in May--MAY?? sorry fer yore floral loss. Seriously, no flowers in May would put me in the doldrums. An' youse tellin' it true--more of jihad is on its way.

Hahaha! Well, now, as a unreformed Dew-Dancer, lemme echo in refrain,
"Degged with dew, dappled with dew...O let them be left, wildness and wet;Long live the weeds and the wilderness yet."

Foamy, a lady that can summon Hopkins when viewing weeds, is a woman of great talent an mirth.

Hey hey. Pooh on the rain! I'se blowin' sunshine yore way. AN the farmer's market is a grand consolation.

Illegal aliens climbing a ladder to my roof.

Take of yourself Aunty.