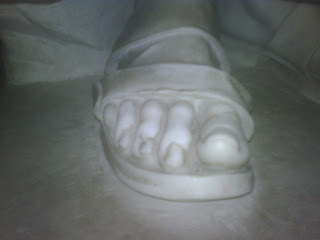 But what's happened here at home? The yakkin' class is all on Mel Gibson (What has he done now???)

Well, heh...in France it is Lilliane Bettancourt, the richest woman in La Belle France -- who done give Sarkozy shade money, amoung other troubles, like her daughter suin' her on account of Lili, a spry octogenarian, givin' a billion (thas' EUROS) in goodies to her young (er) male companion. Seem like the daughter ain't too thrilled watchin' Mama give away the L'Oreal fortune to a gigi.

Or how Italy loves Berlusconi cause he tightened up the treasury, made Khaddafi stop sendin' boatloads of African panhandlers to fair Italia, so they wink wink at his 70 + year old posterior shakin' it up in posh nightclubs wif' 20 somethin's til the wee hours durin' the WORK week--I think we got a chance folks, a slim chance (slime chance ?) to reclaim some dollar value against the Euro while they's all embroiled wif' such stuff...oh wait, we have Nancy an' Harry an' Rhambo. I hate it when the stars refuse to align.

The roses is glorious, the tomatoes is trashed, the beans be over the trellis, the weeds is sneerin' at me. An it is blisterin' hot here, which is two notches below the Euro furnace ...will unpack an come see what all y'all been doin' to hold the fort.
Posted by Aunty Belle at 4:58 AM

Labels: Ain't ever goin' to Europe in the summer again

'bout time you were back, young lady!

The food Aunty, what about the FOOD???

Can't wait to see your pictures, been traveling vicariously through photos daughter and son-in-law took in Normandy and southern England.

I know what you mean about Europe in the summer time. We were in Germany during that killer heatwave they had 6 years ago. We discovered that they don't believe in air conditioning over there. Barbarians! Can't wait for the food pictures and welcome back.

Well now Mz Belle,
I know you wuz welcomed home by all the clanners. Looking forward to the pics, specially if that visual is a hint you done photographed some fine art and architecture as well as the food.

Er ... you have a point, Shammy's food pics are exceptional.

Aint B!!!! I'se beginning to think you'd done gone an' bought a Spanish villa and expatted yourownself. So glad to see you're safely home! Lookin' forward to yer travelogue.

Auntie! Welcome home! I'm with you about Europe in summer. I'd love to go in October time. We've been in September and it is still too hot. It does take some getting used to. Nope, they don't understand the air conditioning concept, even along the Cote de Azure. Can't wait to hear more about your trip! Did you do the Pilgrimage again? Found out I know a guy who actually lives in that city!

Are you quite through gallivantin' all over the place for a week or two?
Rest up and then fill us up.

Uncle didn't pull weeds while you was gone?

heh--youse "Melanzane" in Italian--an lemme tell ya'< I ate my fill of grilled eggplant--whoo-hoo!! Thanky fer the welcome home .

hey you! Listen, now, no foolin' they 's barbarians on the matter of air conditioning. This is what poor Aunty learnt to her chagrin:

BuzzK, I'se shakin' in mah boots to load up any foodie photos--Shamu's tantalizin' amazin' food photos jes' cower me in a corner.

hey hey...well, I din't spend the WHOLE trip peerin' in windows at shoes fer Moi--did snap one or two fer' the Fishy Lady. Standby fer comin' post--though will warn the first post is more of an amusement than travel essay.

lady, whar' ya been yoreself?? Listen, youse near 'bout called it: in mah dreams someday I is gonna have a little stone hovel in the mountains of Spain on the Pilgrimage route to Compostela whar' I will offer aid and encouragement to weary, footsore, dejected pilgrims. I will bandage their blisters and hand out icy cold coca-colas, an' then send them on their way wif' a hunk of ewe's cheese, homemade bread an' a chunk of chocolate wif a "you WILL make it" prayer. But fer you, Sophie Mae? you can have yore own bed for a day or so!

I'se takin' yore advice! Will wait until October fer sure--gasping still. I mean, folks, Vienna was noted wif 100 degrees on the BBC one night--Vienna? But Pam, no pilgrimage this trip--an' the itch to go on the pilgrimage again is growin', (see response to Sophie above) so keep contact wif' yore friend, an when I jes' cain't stand it, I'll call ya up an let's us go!! (BTW, whar's yore darlin' girl chile?)

Mah friend, love that ya use "gallivantin'"....heh. Uncle had gits top marks fer keepin' watch over Granny, so I ain't got the heart to point out the weeds to the poor man--he has enough to do to learn how to skype, a concept that mystifies and unnerves him.

As fer bein' finished gallivantin...well, mayhap I will make a short jaunt to nawth gawja on e weekend. Will y'all be up thar?

People, People, I'm MORE than available to be your personal foodie photographer. I travel light now that digital is king.

Speaking of no AC barbarians....don't they go a little light on the antiperspirant? Now I know why there's SO much perfume.

Maybe the stars aren't aligned... but you are thinking, and that is a start. Never mind, it is too hot to think, let alone figure out the exchange rate.

Welcome Back! Nothing like picking the hottest summer in recorded history to go to a region without AC. Sounds like something I would do.

For the record, I hope I can get winked at shaking it at 70+.

Summer in Europe. No way. September/October are the best months. The tourists are gone and you can actually move around and enjoy the beauty.

Welcome home! you have been missed. Sorry for the weeds and tomatoes.

Okay, Uncle has his priorities straight.

Aaahhh, I can jus' close my eyes an' 'magine it all. I'se gone 'n got hooked on goat milk butter of late. Unfortunately, the lady up the road retired from the goat bidness. Reckon ewe's cheese might hol' me a while. 8-]

So glad to have you back, Aunty. Thanks for the quick economic rundown. Now, I will wait patiently for a SHOE report :o)

I would like to exchange links with your site www.blogger.com
Is this possible?