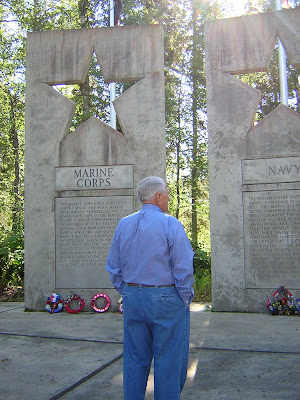 Memorial Day, originally called Decoration Day, is a day of remembrance for those who have died in our nation's service. There are many stories as to its actual beginnings, with over two dozen cities and towns laying claim to being the birthplace of Memorial Day. There is also evidence that organized women's groups in the South were decorating graves before the end of the Civil War: a hymn published in 1867, "Kneel Where Our Loves are Sleeping" by Nella L. Sweet carried the dedication "To The Ladies of the South who are Decorating the Graves of the Confederate Dead" (Source: Duke University) While Waterloo N.Y. was officially declared the birthplace of Memorial Day by President Lyndon Johnson in May 1966, it's difficult to prove conclusively the origins of the day. It is more likely that it had many separate beginnings; each of those towns and every planned or spontaneous gathering of people to honor the war dead in the 1860's tapped into the general human need to honor our dead, each contributed honorably to the growing movement that culminated in Gen Logan giving his official proclamation in 1868. It is not important who was the very first, what is important is that Memorial Day was established. Memorial Day is not about division. It is about reconciliation; it is about coming together to honor those who gave their all. Memorial Day officially proclaimed on 5 May 1868 by General John Logan, national commander of the Grand Army of the Republic, in his General Order no. 11 and was first observed on 30 May 1868, when flowers were placed on the graves of Union and Confederate soldiers at Arlington National Cemetery. The first state to officially recognize the holiday was New York in 1873. By 1890 it was recognized by all of the northern states. The South refused to acknowledge the day, honoring their dead on separate days until after World War I (when the holiday changed from honoring just those who died fighting in the Civil War to honoring Americans who died fighting in any war). It is now celebrated in almost every State on the last Monday in May (passed by Congress with the National Holiday Act of 1971 (P.L. 90 - 363) to ensure a three day weekend for Federal holidays), though several southern states have an additional separate day for honoring the Confederate war dead: January 19 in Texas, April 26 in Alabama, Florida, Georgia, and Mississippi; May 10 in South Carolina; and June 3 (Jefferson Davis' birthday) in Louisiana and Tennessee.
Posted by Aunty Belle at 10:30 PM

Aunty wishes a blessed day to all our service personnel an' their loved ones, an' a sincere thanky to all who made it possible fer us'uns to live in freedom.

Nice write-up Aunty. I just finished watching the miniseries on HBO called the Pacific and it got me to thinking (again) of all the sacrifices soldiers (kids really, most were under 21) make in all wars for God and country.

I was one of the lucky ones who was of age in the gap between the Vietnam and Gulf wars, so I wasn't called to serve. But the job I do (my career) has directly affected the military so I like to think I serve in that way. I've met a lot of soldiers and sailors over the years and thank them by doing my job as best I can. And by telling them what a good job they do.

Thanks for this Auntie and right you are. We watched war movies to celebrate. Midway with Charlton Heston. It was long and drawn out and almost tortuous but I made it through. I feel like a vet after watching it for the umpteenth time. Meanwhile, I have a nephew going back to Iraq for the 4th time SOON. But I like that Memorial Day is now a day to honor all our passed-on loved ones. I hope you are well and all is good on the porch this weekend.

Thank you Aunty. A great reminder and history lesson.

My Dad was on his way to Okinawa when they dropped the first bomb. If it hadn't stopped the war, his platoon was going to be the first to invade. He was 17. A farm boy from Iowa. Soooo many stories like that behind each and every soldier. God bless them all.

i dont think its the same now. Its a different show from ww2 - what are the objectives? its not clear. blessed are the grunts though who gut it out on the front line.