When I 'se a Rich Cracker Woman...

I shall spend the Octave of Easter lookin' at mah very own Book of Hours. I reckon I might collect Medieval illuminated manuscripts!

These two selections is from the calendar done fer the Duc de Berry ( a really really rich Duc--thas' French fer "dude") by the famous Limbourg brothers:

"In terms of historical and cultural importance, Tres Heures is certainly equal to more famous works such as the Mona Lisa, marking the pinnacle of the art of manuscript illumination." 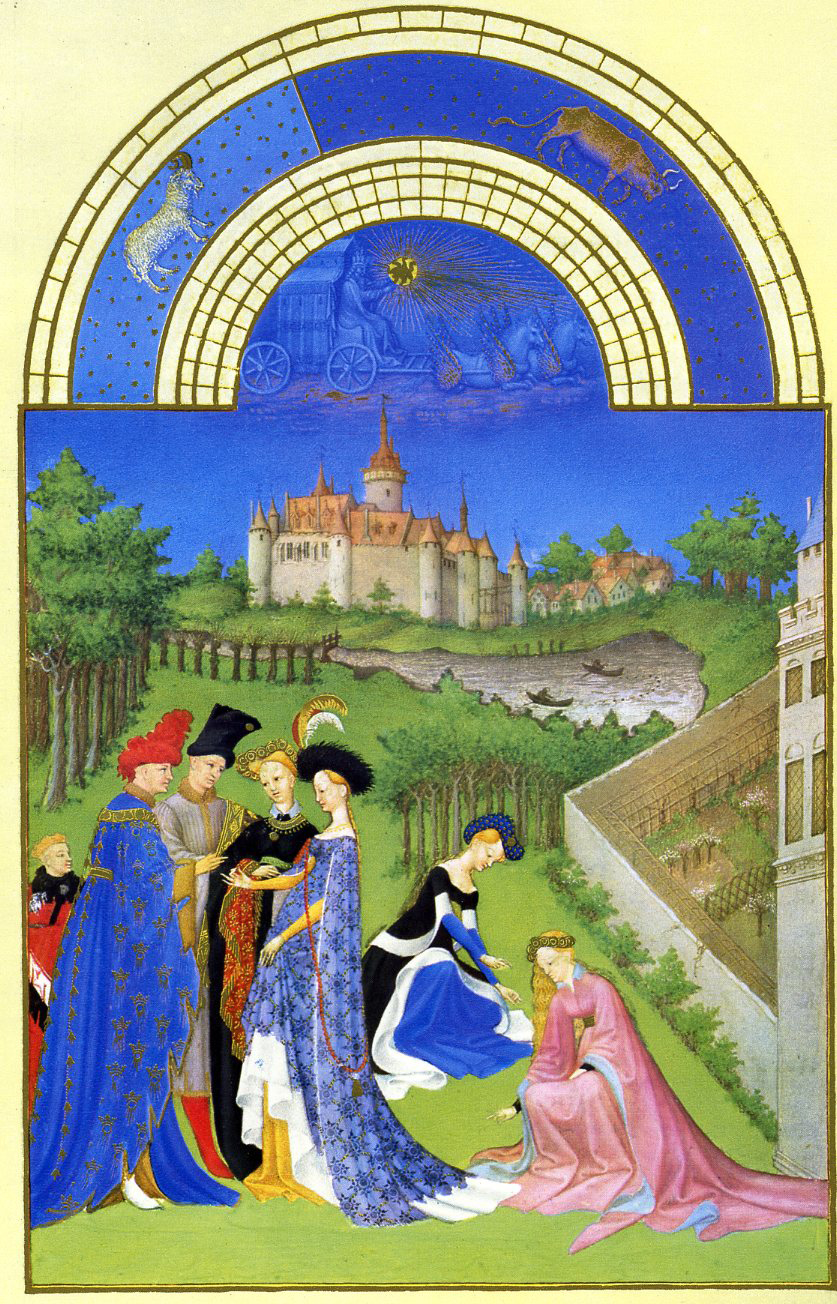 "The arrival of spring, hope and new life - the grass is green and a newly betrothed couple are exchanging rings in the foreground, accompanied by friends and family. The chateau is another one of the Duc's, that of Dourdan."


.........What I notice is the Duc's chateau has a lovely potager--a kitchn garden wif' what might be pears or apple trees or soemthin' espaliered --ain't it lovely?

This heah below, now, is May. Note the important use of green. An doan'cha love the treatment of the astronomic sky? 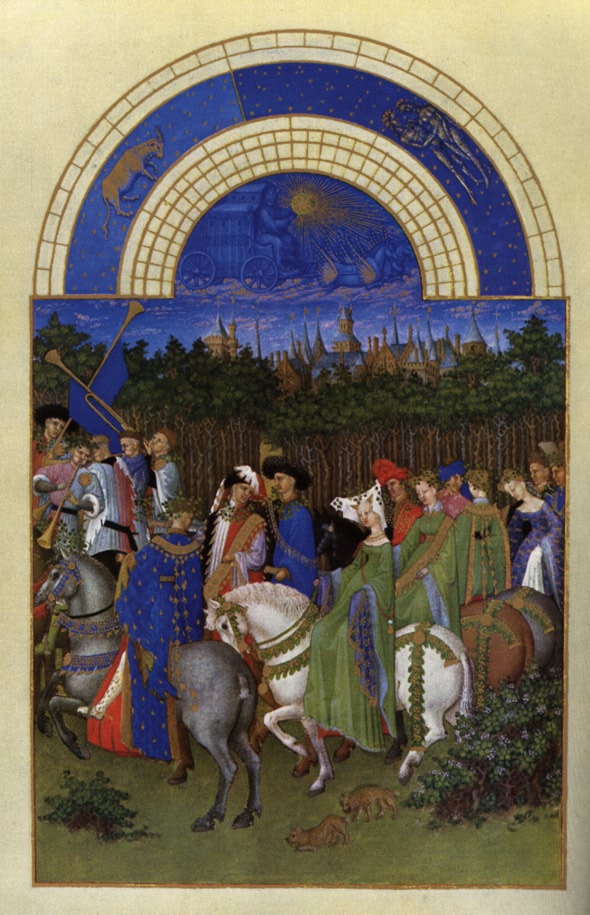 "On the first of May, following a tradition derived hom the floralia of antiquity, young men used to make a light-hearted jaunt through the country and bring back branches. On that day one had to wear green at the risk of being ridiculed. This is the origin of the expression "Je vous prends sans vert" ("I've caught you napping"). In his youth the Duc de Berry liked to take part in this festivity, and at court the King would distribute garments made of cloth vert gai in color and known as livrée de mai. This garb is worn by the three girls riding horses caparisoned in a refined soft green, a color obtained from the crushed crystalline stone, malachite."

Pappy Cracker took his girls to Istanbul 'bout ten years ago. I was astounded to see them Turks had a version of illuminated manuscripts too--oh? Whas' that ya say?
The Muslims ain't supposed to paint pictures of live thangs? I know. I know. But lemme tell ya, they have FAB-u-lous illuminations. A Cracker Lady could spend a lifetime collectin' all manner of Medieval illuminations.


Meanwhile, thar's always cribbin' from the internet like I done.

Some of the most magnificent examples of the Book of Hours is now at the Met in NYC. Belles Heures runs through June 13th.


The Très Riches Heures was by the Limbourg brothers, Paul, Hermann and Jean. They came from Nijmegen in what is now the Netherlands but were generally referred to as Germans. Very little is known about them; they are believed to have been born in the late 1370s or 1380s and were born into an artistic family, their father being a wood sculptor and their uncle being an artist working variously for the French Queen and for the Duc de Bourgogne.

They seem to have followed in their uncle's footsteps and by 1402 had entered into the service of the Duc de Bourgogne as artists. By 1408 they had entered the service of Jean, Duc de Berry, one of the most notable (and richest!) art lovers in France. They are known to have executed several other pieces of work apart from the Très Riches Heures but most of these, with the major exception of the Très Belles Heures, seem to have been lost.

The Limbourgs used a wide variety of colours obtained from minerals, plants or chemicals and mixed with either arabic or tragacinth gum to provide a binder for the paint. Amongst the more unusual colours they used were vert de flambe, a green obtained from crushed flowers mixed with massicot, and azur d'outreme, an ultramarine made from crushed Middle Eastern lapis-lazuli, used to paint the brilliant blues. (This was, of course, extremely expensive!)

The extremely fine detail ( check out Hell here, and The Way of the Cross here) which was the characteristic feature of the Limbourgs needed extremely fine brushes and, almost certainly, lenses.

An the Limbourgs did some ordinary "chore" hours too. I love 'em! Gardenin' like this must have been pretty as a picture. Onc't, y'all, in France I drove over a ridge to come down a mild slope to see chamomile growin' in ten acre blocks alternated wif' somethin' green--the whole country side was green an' gold wif the blue sky above, an yes, the ruin of a castle on the distant hill...an' I stopped the buggy an' jes' sat lookin', tryin' to burn it in mah brain , the look of it. I never saw the first machine though later I did see tractors, but on that day I coulda been in 1474. 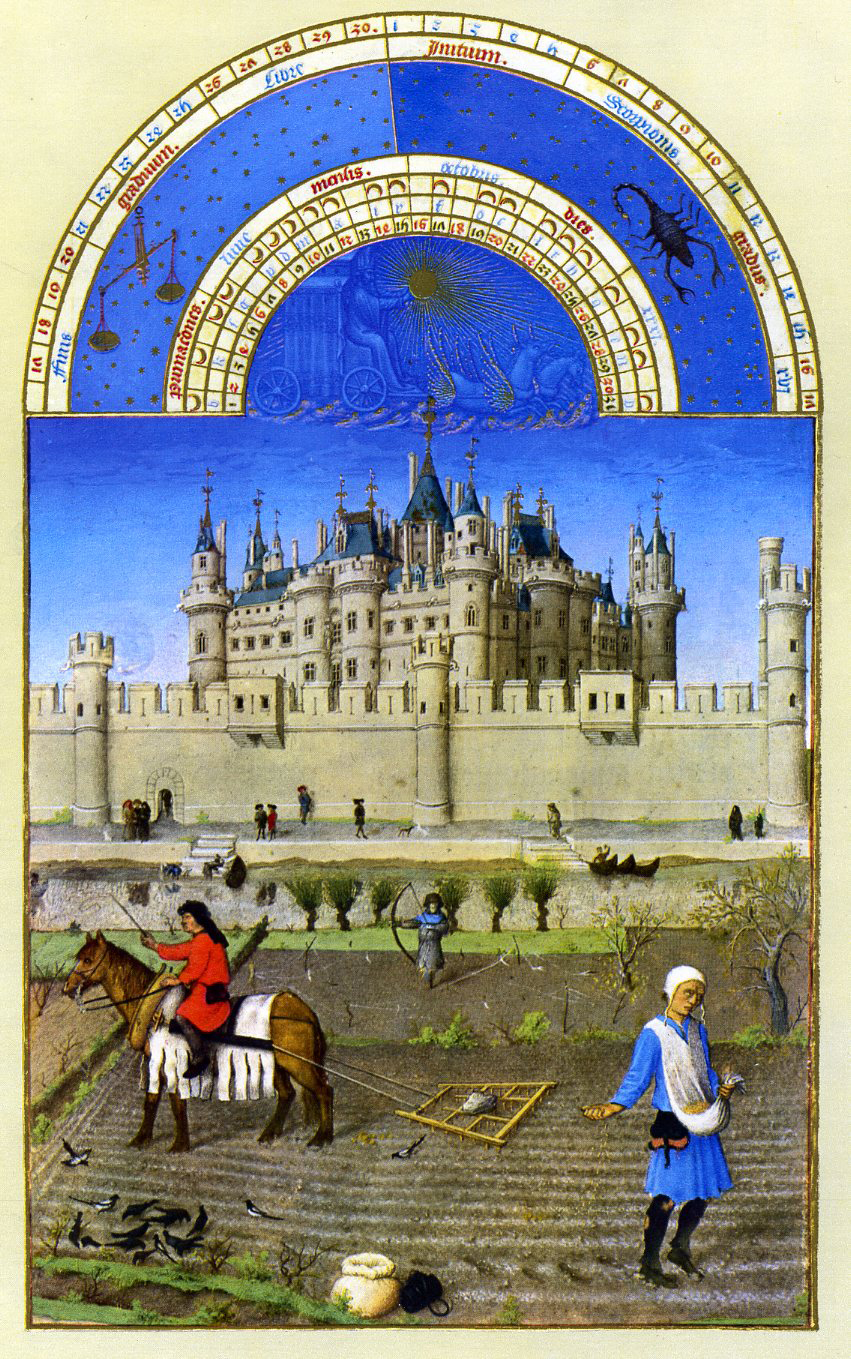 Does this one below give y'all the willies? The torment of St. Anthony ( who prevailed!) 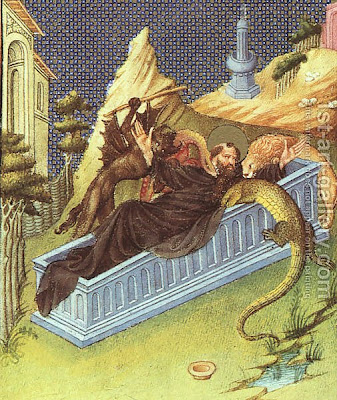 In around February 1416 all three Limbourg brothers died before the age of thirty, apparently killed by an epidemic."

In addition to his ostriches, an' camels he was the medieval world's greatest connoisseur of the visual arts, most importantly - a magnificent collection of books. He owned astronomical treatises, mappa mondes, and a large number of religious books: 14 Bibles, 16 psalters, 18 breviaries, 6 missals and no less than 15 Books of Hours, including of course the Tres Riches Heures.

Now, THAT is riches!


P.S.
Foam, a dear blogger friend suggested the illuminations of Hildegard von Bingen, a 12 century anchorite and mystic. She also wrote books and music--an incredibly talented and insightful woman. Here is a sample of Hildegard's illuminations: notice how a door of heaven opens and fire is pouring down on Hildegard? well, this is indicative of her viasions which she described as a holy fire --an infused knowledge of the world, the future... this lady was one of mah favorite--though I had not known of her artwork. I HAD known of her writings, her history, her music (CDs of which I play). What I like about Hilde is that she was a tireless opponenet of heresy. Yep, she blasted it wherever it reared its ugly head. ( a wee clarification: anybody who wants to believe anything whatever is welcome to--Aunty ain't out to crack haids on account of what somebody beleives. But heresy is different. A heretic is one who claims to be of a certain religious afflication, but refuses to abide by the teaching of the religion they profess--imagine a fellow on the Gator football team who inists he has a "right" to wear a FSU Seminole jersey and to hep the Seminoles make a play...ridiculous, right? EGGSactly. )

Anywhoo....Hildegard was an amazin' lady--thanks Foamy!!
Posted by Aunty Belle at 4:50 AM

Amazing colors in the artwork! We have been studying Russia in my 9th grade geography class. The kids with an artistic flair have been particularly intrigued by the icons we've looked at. Remind me of your illuminations.
Neat post, Aunty :o)

i have to agree aunty, when you is rich this is a very worthy collection path. man oh man i love that astronomy sky and the green. so rich i think i just ate a whole coconut cake.

these manuscripts are so very crib worthy.
you know, working with some of the paint materials was very very dangerous...toxic. but oh those colors. you will never again see the blues of the lapis lazuli except form middle ages paintings in egg tempera. no process has ever help up so well over centuries.

fascinating post today aunty. wish we could get those images a lil bit bigger on the page. can i help?

i have always adored illuminated manuscripts!
have you ever look at the illuminations by hildegard von bingen?

These are absolutely gorgeous. To see them in person must be a wonderful treat. The closest I've come is the fraktur work of the Pennsylvania Dutch at the Folk Art Museum in NY. Not as detailed or richly vibrant as these but still just as passionate in their dedication to their subject. Thank you for showing me more beauty.

I like the top one best. (of course)
Just wanted to drop a line to say goodnight.

Caroline,
what fortunate 9th graders! Icons are very intriguing, though I've only seen them in a museum. Imagine in their intended setting--wow!

heh...coconut cake huh? Youse a stitch, Dawg. Knowed that sky thang would grab ya'--ain't it interestin' how they conceive of the right order-liness of the cosmos? Oh, an' I fixed the size of the pics--is this better?

Fraktur? Mah ignorance is gaping wide--more stuff to check out! Thanky, really pleased ypu like it...notice the amazin' detail, like the fishermen wif the net in that first one?

Chile whar on EARTH or Mars has ya been? How is thangs wif' ya darlin? Doan be a stranger, now.

Last time I was by your Granny was back in hospital, I hope she's feeling better!

It's interesting that towards the end of the post you talk about how they got the colours by crushing up the minerals. Fascinating as when I saw the blue, I was instantly curious as to what they used, that brilliant cobalt is such a hard colour to attain in nature. Of course it's lapiz, very prevalent in that part of the world. Gorgeous. I just loves pretty, intricate things that I can look at for a long time. Modern minimalism is so boring in contrast.

yeah .. just type in hvb illuminations and you will get a few sites.

thanky! Granny is out of the hospital (Again!) and stable an' even feisty--always a good sign.She is fragile however, an the docs ain't optimistic. Each day is a gift.

Youse SO right--I is sick of minimalism. Ain't never seen no minimalism in real nature. Not saying nuthin' against "spareness" which I does like...but the reduction of thangs to near nothingness is simply boring.

Hey--looky, did ya see I added an illumination by Hildegard to the post--thanks fer the tip!!

(does anybody reckon this post topic must bore the menfolk? )

yeah! i noticed! :)
i think her illuminations are amazing.

By the way, Aunty, I love your very large photos and Shamy's too. She told me she's using something called Stretch, are you using the same thing?

Hey Diva, yep, the template is Minima Stretch. But lots of other templates have a new stretch version too.

I loved your description of travels in France, the Cammomile fields sans technology so's the vision could have been from previous centuries. So smart of you to recognize in the moment to pull over and drink in the image for replaying when you take to wearing purple.

The good thing is many "foundations" do support artists to this day. Sadly, they seem to support those who wrap islands in pink plastic and organize helicopter rides for optimal viewing.

So Aunty,
iffen you was a rich baroness what kind of art would you be commissioning?

Why I s'pose I'd like to commission some contemporary art to image the beauty of this era--not gunk like Pollock.

But frankly, we's lost our tast as a culture fer beauty--happened when we started to worship corporate efficiency.

Aunty,
You don't favor the freedoms of old age proposed by Jenny Joseph in her poem, 'When I Grow Old I Shall Wear Purple" ?

When Aunty grows old,
she shall wear coppery silks,
Hermes scarves and Laboutins!

Our Aunty shall collect
antique batistes
spiritual artworks
and have her own Gregorian choir!