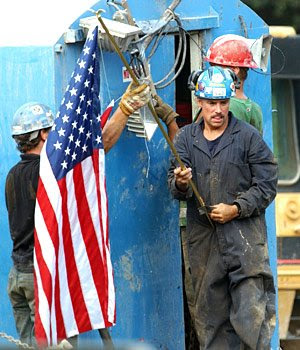 Ya'll, here is a comment from a reader of the Back Porch who's seen the most recent Front Porch post. I'm puttin' her comment front and center since it is a testament to what the REAL backbone of America is--folks like Malinda and her Fella. Read it an think deep about why it is that self-reliance is the handmaid of freedom.

I'se sure curious what ya'll think of Malinda's point of view. Leave me a note or two on it if ya will.

I am speechless, except that never happens to me :(...so this one will be long!

I'll try to write like you (IN HONOR OF YOU) to show what you mean to me and this MIGHT BE YOUR BEST POST EVER...and I usually favor the back porch!

My spellin will be off, cause I can't do it like the original Aunty Belle that if she doesn't already own a PHD she should. I don't know WHO you ACTUALLY ARE...but givin' my history from my years in your country...I'd sure like to know...cause I'd like to buy you a damn nice dinner and shake your hand! Here goes...

Sees...I lived in Missipi for a while, my Daddy used to live in Loosiana... I didn't have nothin then, but I had more than some days. I's hard nosed and kept it to the grind stone and climbed up a rung or two each quarter of each year I lived there. Knew a few impotent folk or two while's I was there. Don't talk to 'em now...but I knew 'em then. I tried hard to be a better folk, and rise up to all good.

I came to Missipi as a manager workin for the man...lookin for a bigger opportunity. I got it...and then some. Met me some celebrities, wore a few sparkly dresses and went to some impotent parties...but I left after 4 years, not for bad reasons necessary, but for reasons of my own.

I came back to this here Nevada and did good. I's stayed single 'cause all the lookin' men weren't no different than Ned. But I met a man not so much different than Uncle...and I married him. Few years later...We's opened up ourselves a "pork rind plant", excepten' we fixes engines, transmissions, and the such...we own garages. We's just dirty ole' folks. 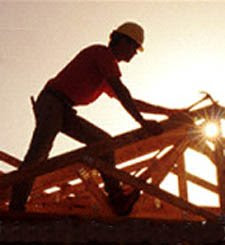 See...we's appreciate the folks willing to git dirty and make pork rinds...hmmnnn...fix trucks. Don't nobody at my place make that min-num wage. They's got benifits too...som insur'nce and some 402K, and some AFLAC (don't you love the DUCK)...got gas cards too sum of 'em...don't have to worry about fillin up they's vehicles to travel a few blocks to work...

And ya knows...I get it...they's NOT HAPPy that I have a house on tha hill...I's the man keepin 'em down. But when they all cryin po mouth and sadness...and me and "my uncle" go home and have us a nice PBJ sandwich fo supper and have us a little spark in bed... 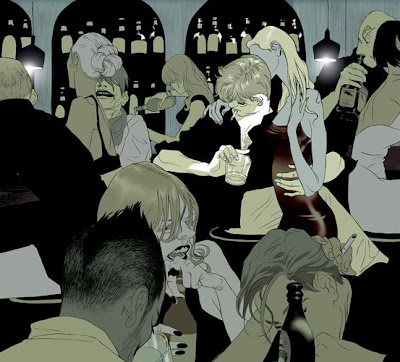 They's all still at the bar payin $4 bucks a beer to bitch about me an payin $6 bucks for smokes to get 'em through the night!

And then...when one of they's spouses gets fired...and gets on the un-mployment... get's offered a job right before the man's gonna take the house...says this damn shit to me...

So...THANKS BELLE...YOU NEVER HIT IT MORE ON THE HEAD THAN THIS POST...I'M GONNA LINK IT...PASS IT...PRAISE IT...AND THANK GOD there are people like you that can write like no one else :)

Aunty is headed fer the mountains fer a few days tomorry. I'se hopin' to mend my spirit some by lookin' at the beauty, the change of season from green to firey gold-- 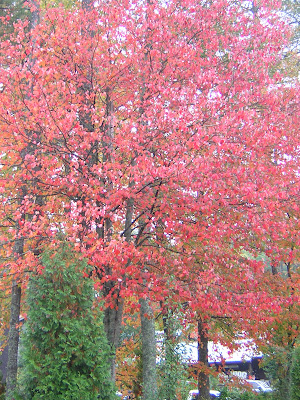 so I can git back to the fight. Mebbe I can git connection if so, I'se gonna check in an see what sort a flurry is goin' on when I can. Mercy but I'se sick at heart over all this.

Doan fergit to hound the HOUSE of Reps--tell 'em HELL NO! Ya know how this went down? They all bribed each other by lettin' ever'body stick their own earmark on the sluggard behemoth of 800+ Billion. Oh, an the foreign moneybags? Their calls were taken, but not ours--who does YORE rep represent??

Obviousy, this woman needs to be taxed more heavily.
Don't worry, Barry will get her good.

I see why you reposted her comment. She's right on.
Personal responsibility is such an unPC philosophy.
Maybe that's why I like it so much.


Jes' in case ya'll wanted to know how serious this whole bailout worry is fer your lawmakers, here is the part they tacked on the bill about expemptions for those who make wooden shafts for arrows the chillen' play wif'--ain't kiddin (pun intended!)

20 SEC. 503. EXEMPTION FROM EXCISE TAX FOR CERTAIN WOODEN ARROWS DESIGNED FOR USE BY CHILDREN.
(a) IN GENERAL.—Paragraph (2) of section 4161(b) is amended by redesignating subparagraph (B) as sub301
O:\AYO\AYO08C32.xml S.L.C. paragraph (C) and by inserting after subparagraph (A) the following new subparagraph:
‘‘(B) EXEMPTION FOR CERTAIN WOODEN ARROW SHAFTS.—Subparagraph (A) shall not apply to any shaft consisting of all natural wood with no laminations or artificial means of enhancing the spine of such shaft (whether sold separately or incorporated as part of a finished or unfinished product) of a type used in the manufacture of any arrow which after its assembly—
‘‘(i) measures 5⁄16 of an inch or less in diameter, and ‘‘(ii) is not suitable for use with a bow described in paragraph (1)(A).’’.
(b) EFFECTIVE DATE.—The amendments made by this section shall apply to shafts first sold after the date of enactment of this Act.

Thank you for the kind words :) Enjoy that peace in the woods, sounds wonderful!

Thank goodness I don't have to write my Representative. Dean Heller is my guy...and he voted NO the first time and will vote NO again I'm sure :) Wish they were all like him :)

er, spengler had a grim little column today. he doesnt respect we the people much - i think he was hoping for pitchforks and torches.

I let both our Senators' aides have it this morning. Basically asked them how they could justify betraying the ideals upon which this country was founded and how they could ignore the wishes of the people.

Then I made another round of calls to our Representatives urging them to stick by their original NO votes.

Aunty - great re-post, thank you. I can sooo understand where Malinda is coming from. Anyone running a small business knows it takes blood/sweat/tears to make it work. We are a strange breed, but I couldn't have it any other way.

YOU have restorative trip - clear your mind. xoxo.

Well Aunty Belle,
Thanks for sharing the Melinda 777 post. It is indeed indicative of a pervasive philosophical cancer in our current culture. Some days I think if we did have a collapse it would be an improvement as it would force folks to get real.

It isn't however just about those sorry folk who would rather bitch and collect rather than work and accomplish. The disinclination to accept responsibility for products or actions are equally pervasive. I've encountered two issues this week which illustrate this point.

The first was related to a house being constructed. The inside paint job cost $22K and it was a really lousy job. The painting contractor was called to the job site where he agreed the job WAS lousy but he had this explanation for the homeowners, " Well, I can't help it, the painters are all Mexican and they don't speak English! I tell em what needs to happen and show em too but you can't expect me to stay here all day with them; I have to be out there bidding and contracting my next jobs!" The homeowners, logically, pointed out they had not contracted with the workers but with him and what did he intend to do to fix the lousy paint job in their lovely new house? His response, " You can't hold me accountable for the handouts and the immigration laws! In America now we have Mexican painters and THIS is how they paint. English speaking Americans don't paint cause it's work, and it's not their value system to receive a days pay for a days work cause they can receive pay from the government to do nothing but sin by the hour!"

I get this fella was overwrought but at no point in his conversation did he assume responsibility for the quality of
"product" produced by his company!


In yet another astonishing episode a seamstress custom made a beautiful silk suit for a client. Unfortunately it did not fit the client and so had to be completely remade. When the seamstresses client came to pick up that suit the invoice was doubled. When the client mentioned to the seamstress this error the seamstress sweetly replied, " It's not a mistake, I had to make two suits so you are charged for the labor and material for custom making those two suits."
The stunned client said..."the reason you made two suits instead of one suit is because the first one did not fit...it was made wrong AND I am here picking up just ONE suit!"

The seamstress sighed and very carefully, like talking to a toddler, explained to her client ,
"well anybody can understand if you have twice the material and twice the labor you also have twice the costs".

The client then said, " You can't be serious! If you buy a gallon of milk at the grocers only to find the milk is in fact soured you can return it to the store and they will then apologize for your inconvenience and replace the soured milk with fresh milk. They don't CHARGE you for the replacement milk! The same principal applies here!"

"It's not the same", the seamstress said, "the grocer is a big company and can afford to give away milk, I am a small business and I cannot afford to make two suits for the price of one"

I am a scared speechless American

I hope you had a nice time in the country this weekend.

two questions: where are these $4 beers, and are they Guinness?

aunt b, you must come by for my October Surprise - regular posts throughout October... you've already missed some!