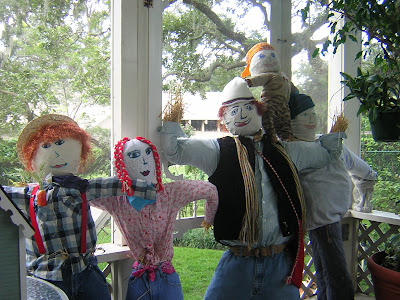 Here we is, at All Hallow's Eve (Halloween). Hallow, of course, means "holy" (i.e. hallowed ground). It is the eve of the day Christians celebrate All Saints Day--that is, the holy (hallowed) folks who went to heaven afore us'uns.

Ya' knows there's only a zazillion versions of how Halloween got started, but a fair one is that them poor troubled souls who was neither fish nor fowl (foul?) would roam the earth on this night moaning in regret that they weren't among the hallowed ones.

AN' they would "haunt" ya' unless ya forgave them their trespasses an' let them go on to they reward!

Some of them New Age devotees wants to say that the date of Halloween is a Druidic special day, but history doan support that. Rather, them ancient Celts celebrated every last day of the month. 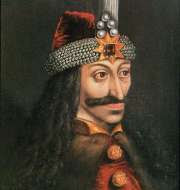 One character who shows up at the door eve'r Halloween is a Vampire --and yes, usually as Dracula.

Ya'll knows thar' was a real Prince Vlad Tepes who lived in Wallachia, in what is now modern Romania? Also knowed as Transylvania ("land beyond the forests"), this region of Eastern Europe was once an important Roman province. Vlad --known as Vlad "Dracul" (Dragon) because his daddy had been in the Order of the Dragon (A knightly fightin' group what fought the Ottomman Tuks)-- were born in the 1430s.

An' the odd thang is, he was both loved and detested. It's known he kept order. Warn't no thieves or rapists or swindlers around, cause iffin' he caught ya', youse impaled forthwith! Ain't no wonder then that legends grew up around his more..ah..creative tortures. Course, many Romainians see him as a hero who defended them from the rage and rampage of the Ottomans, a prince born into a barbaric time, but whose loyalty to Wallachia was unshakable.

He was said to be very just toward his own subjects.

But, he nurtured a brutal hatred fer Germans and Hungarians. Though he styled hisself as a knight in the "Order of the Dragon", few thought his behavior was becomin' of a knight!!

Well, folks, mebbe he warn't a real friendly fella, but then, iffin' yore daddy done left you as a hostage of a Ottoman thug, mayhap you'd be a wee bit wacky too. See, his daddy gave the little boy over as a pledge in the Ottoman court until he could secure his land--ain't no tellin' what the boy seen! Historians is pretty confident that Vlad Dracul learned his methods--includin' impalin'--from the Turks.

(Today, Romania promotes Dracula fer their tourism industry!
They take ya' here--to this castle, but it was not really his
castle cause his is gone. But doan it look, ah, very castle-y?)

As fer the bloodsuckin', they ain't much evidence fer it...although he was known to be happier on cloudy days--averse to sun.

Mayhap he was a porphyriac--a person what lack a certain enzyme that makes heme (the red part, for the blood)...so they tend to be pale and gravely (hee hee) threatened by the sun. See the problem is that the porphins build up in they body and is real toxic--can even cause mental disturbances like paranoia. AN iffin' they have the type called erythopoietic porphyria, they skin is extremely photosensitive, blister in the sun, and they grows a lot of hair on their foreheads,
( that deep widow's peak associated with Dracula)--poor thangs! They can (rarely) even get a gum disease what exposed the teeth in a fang-like grimace.

However, porphyriacs is not actually known to be bloodsuckers.

Dracul was beheaded by the Turks after a battle--his haid was impaled on a post at the Sultan's court...but some say the body was taken Bulgaria and buried at a secluded monastery.

As fer the purple skin, as Dracula is often tinted violet in many depictions, some look for clues in the feldspar family--porphyry, a purpish-red crystal. Of course, ya'll what is artists know that porphyry is the name of a certain color purple, in fact the word is Greek for "purple." An' then there is the odd connection of the Syrian philosopher, a neo-Platonist, who named hisself Porphyry , born in Phoenicia (known for its royal purple cloth!) in 234 A.D. He suffered wif' depression and strange visions, such that he taught that the body needed to be escaped --that man's birth into a body was a source of his shame, the higher calling was to become non-corporeal.

Fer a fictional mystery on Dracula, git ahold of The Historian.

As for porphyriacs, some say George III of England and VanGogh suffered with the disease.

AN' the English poet, Robert Browning wrote a poem titled, Porphyria's Lover,
part of which I leave for ya'll:

The rain set early in to-night,
The sullen wind was soon awake,
It tore the elm-tops down for spite,
And did its worst to vex the lake:
I listened with heart fit to break.
When glided in Porphyria; straight
She shut the cold out and the storm,
And kneeled and made the cheerless grate
Blaze up, and all the cottage warm;
Which done, she rose, and from her form
Withdrew the dripping cloak and shawl,
And laid her soiled gloves by, untied
Her hat and let the damp hair fall,
And, last, she sat down by my side
And called me. When no voice replied,
She put my arm about her waist,
And made her smooth white shoulder bare,
And all her yellow hair displaced,
And, stooping, made my cheek lie there,
And spread, o'er all, her yellow hair,
Murmuring how she loved me--she
Too weak, for all her heart's endeavour,
To set its struggling passion free
From pride, and vainer ties dissever,
And give herself to me for ever.
But passion sometimes would prevail,
Nor could to-night's gay feast restrain
A sudden thought of one so pale
For love of her, and all in vain:
So, she was come through wind and rain.


Be sure I looked up at her eyes
Happy and proud; at last l knew
Porphyria worshiped me: surprise
Made my heart swell, and still it grew
While I debated what to do.
That moment she was mine, mine, fair,
Perfectly pure and good: I found
A thing to do, and all her hair
In one long yellow string l wound
Three times her little throat around,
And strangled her. No pain felt she;
I am quite sure she felt no pain.
As a shut bud that holds a bee,
I warily oped her lids: again
Laughed the blue eyes without a stain.
And l untightened next the tress
About her neck; her cheek once more
Blushed bright beneath my burning kiss:
I propped her head up as before,
Only, this time my shoulder bore
Her head, which droops upon it still:
The smiling rosy little head,
So glad it has its utmost will,
That all it scorned at once is fled,
And I, its love, am gained instead!
Porphyria's love: she guessed not how
Her darling one wish would be heard.
And thus we sit together now,
And all night long we have not stirred,
And yet God has not said a word!

I've seen a few bits about him.
He was a vicious bastard to be sure, but he lived in vicious times and had vicious enemies.
I think that instead of cowering under the brutality of his enemies, he chose to show them the meaning of the word.
Not a guy one could easily like...still, placed in context of his time/place, he can be understood.

I really enjoyed the poem, thanks.

Thanks Aunty Belle for the entertainment and information! Ilove history, especially if it's accurate!
Happy All Haloow's Eve!!! Lifting a glass in your honor!

All Hallow's Eve..Hhhehe, too many glasses of wine lifted apparently...

great scarecrows!! something to plan for next year.
ya, i knew some of the info about vlad. i've read a little about this blood disease.
and that's an oddly lovely poem by browning. i was not familiar with it.

Glad ya' tought the info on Vlad entertainin'...and that some of ya like the BRowning poem...but I left out the scariest part of the poem! The lover murders poor Porphyria! Yep, he does...and scholars is mixed on what it means--is it allegorical?

Or is Browning influenced by recent and lurid London murders? Some say the lover kills Porphyria so that she will always be his...but other point out that the lover never moves or speaks--she has to "put his arm around her" --as if he is paralyzed....that is, until he ...well, you'll see.

I've added the remainder of the poem to the post--take a moment to read how creepy it is!! Then t ell me what yo' think Browning was sayin'???