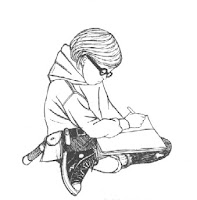 Ain't made out to the Porches since Halloween to treat the kiddies.

So much piled up on mah desk that I fled my study for solace......

...an' now the dining room table also looks a like a lava flow

Uncle Aloysius iffin' he doan build me a library real soon...
whar's I gonna put all these books???

Folks send me so many clips and blips on the computer fer, ahem! "real work" that I'se guilty -feelin' fer even thinkin' 'bout bloggin.' But stuff is seepin' through that I'm jes' throwin' off mah desk so I can git ter work--this is among the stuff I'se movin' to make space fer work:

The Hollywood horror of the month is not Halloween but the Writer's Guild of America (WGA) 's impending strike...meaning no more Saturday Night Live or David Letterman --jes' reruns.

The writers ain't strikin' fer money, but fer a method to collect when TV ain't. I means, when all content is a personal download onto what ever screen ya'll uses. Ultimately, it's a question of intellekshul property rights--the music industry an' artists all have the same struggle--Aunty ain't no glamorous Hollywood-er, but iffin' anybody is interested in the food fight between the screen writer's and the wonks, read it here.

What would the world look like iffin' creative folks quit creatin' ? If ever' thang were jes' some derivative of somehtin' already done...well, it bears some thinkin', an' I ain't shure whar' I is on it.


But I also seen how a famous atheist done had a turn of mind, shall we say. Antony Flew is a famous British philosopher who used to hang at Oxford wif' C.S. Lewis and his gang...but Flew flew that nest in search of science, not God

Anthony Flew: There were two factors in particular that were decisive. One was my growing empathy with the insight of Einstein and other noted scientists that there had to be an Intelligence behind the integrated complexity of the physical Universe. The second was my own insight that the integrated complexity of life itself – which is far more complex than the physical Universe – can only be explained in terms of an Intelligent Source. I believe that the origin of life and reproduction simply cannot be explained from a biological standpoint despite numerous efforts to do so. With every passing year, the more that was discovered about the richness and inherent intelligence of life, the less it seemed likely that a chemical soup could magically generate the genetic code. The difference between life and non-life, it became apparent to me, was ontological and not chemical. The best confirmation of this radical gulf is Richard Dawkins' comical effort to argue in The God Delusion that the origin of life can be attributed to a "lucky chance." If that's the best argument you have, then the game is over. No, I did not hear a Voice. It was the evidence itself that led me to this conclusion.
Posted by Aunty Belle at 6:13 AM

the world would be a dreary folks without the folks who create...

yah, i know what flew is saying. i get it..
foam

I can't figure out what the big deal is....
Like the uaw striking to demand that their companies bow to the continued support of the workers.
Not that it's a bad idea for the workers...
only that, in the doing so, the general population is asked to foot the bill in a big way.
Buy a new car every year?!?
HA! You might as well try and get me to eat LIVER!!!

But, now, them joksters got NO EXCUSE!
Re-runs!?!?
Pop too many re-runs at us and we'll be lookin' fer the likes of Crashtest Comic coming to tv!
Or Seifeld, who re-wrote his entire routine since leaving his tv gig.
Surely out'a all them talented folks, one of them can come up with a good laugh off the cuff!?


Now, about that there desk top of yers. Dang! A LOT of books!
It don't take much more'n a few concrete bricks and some boards t'make shelves....
'Course, after y'make 'em like that, you should go back with a few 1x4s and "fuse" them together, just for staying upright.
Or, put a bible in with the group. Bible's "upright" ain't it?

Heck, I'de come over and build ya a dandy shelf system with some boards and screws.
I use screws because I can't fer the life of me get past hit'n'bend two nails, nail one in. Hit'nbend another nail, get one in, and so on and so on....
As a carpenter, I make a great example of a cook.

Not that I use nails in m'chicken recipes, mind ya.

I know of the work, though. Been bustin m'britches on a commission, choppin up wood fer winter, movin' m'computer and art studio into one small space. Now, THAT's a doozy if ever I saw one! I gotta take a picture of the get-up and post it.

Well, good luck gettin' yer Uncle t'makin' shelves.
Maybe just tie a couple of boards, a hammer and saw to HEE HAW's back and walk him around so Uncle can see ya and when he asks, tell him you found someone a lil less stubborn t'help with the shelves....
('course, if he really is a gun runner, y'don't have to tell him about it being MY idea)

content. some people make it and some market it. now the way i see the future is more avenues for the creatives to take the product directly to the consumer. its what i am working on.

as a consumer i go to blogs and you tubes and membership based radio content for my entertainment. i take in less and less tv and frankly some of the writing i see on tv sucks. i saw just a little bit of saturday night live this past weekend and i was embarrassed to be in the same room with the show. just weak as hell, lacking in any originality or genuine humor.

i hope television is a dying medium...youll go to your computer and dial up whatever you want...and you will compensate the artist directly.

theres free talk radio everyday. i pay to listen to dennis millers show whenever i want to...and can archive my favorite shows on my ipod...i paid for it. thats how money is made.

in blog land money is made by page hits and ad revenue as we discussed at bogs recently.

in the end the real issue is how to connect artists and consumers.

like i already said i would rather read the blogs of the people on our respective howl outs than anything else offered.and so far its free. but id be willing to but some dollars in the tip jar of every blogger i read.

but free doesnt mean quality and ive got 700+ channels to prove it.

BONEY!! SO happy to see ya back! Ya' been all tied up? I admit I doan know nuthin' about unions other than some make use of dues to support candidates that the whole membership ain't agreein' wif'...but other than that I doan know how it is...mah friend is a screenwriter what is worriet over the future use of the internet for ALL CONTENT and how they ain't nuthin' in the contracts that specifies that use.

As fer the bookshelves--thme's good ideas...jes that they ain't no PLACE to put it--see, Uncle needs
to build me a wholle new wing...ya know how that idea went over??? He suggested I could git me a new fella easier than I could git him to build anything more onto this domicile.

SHE puppy! I LIKE yore ideas...but how IS we gonna connect the consumers and the artists? My friend says the REASON youse not likin' the schlock you see on TV is t hat the writers write good stuff, then the network wonks make them change it to suit the wonks--who ain't funny and ain' got a clue what is relevant to the real folks out here. So, they re-write and trim and stuff with stupidity what began as a good script.

Hoo-whee, happy I ain't got to sing fer mah supper in Hollywood.

Can you really call most of those writers "creative?"

Hey Iamnot, truth is, puddin' Aunty doan know any of them writers in Hollywood 'cept two. Them two is very creative, funniest folks I know and wonderful human beings to boot.
But I'se thinkin' they is exceptions--I KNOW they is ....they's about 1% of the bunch who is creative AND decent humans..the rest sell they souls for a gig.