I'se in a heap 'o trouble round heah.

So, while he's waitin', I got to cacklin' over some blog I'se readin'.

Uncle frowned. "Why's the whole dern world bloggin'? I'se fed up wif folks tellin' me about they blog and workin' folks come in ever'day blogged out and worthless."

I read to him from the blog post I'se readin' at the time.
It were about a fella who laid out his hard-luck day, an' how thangs jes' went from bad ter worse...

"An' thas it?" as't Uncle? Ya' mean folks jes write down what they done that day and lay it out fer the whole world ter see? I doan git it...Whas' funny about that fellas' rehash of his bad marriage, his lousy hound dawg, his crappy job, or his bad tires, sqawlin' kids, and
bad hair day? "

Uncle doan know nuthin' about computers...this done led ter some real worrisome troubles when a seck-e-tary up an' left ter follow her hog-boy (motorcycle man) ter canada. She left while Uncle's "administrative assistant" was on leave after coughin' while reachin' low into a file cabinet and throwin' her back out.

"I cain't even see iffin' the boys got they paychhecks or not," moaned Uncle, "Ever' thumb-suckin' thang is in that MA-CHINE!" he roared.

That were a few weeks ago. Since then, he come home and announced that he signed up ter take a computer course at the Senior Citizens Center.

I had ter drap down on the floor, jes' rockin back and forth in laughter. Ever time I looked up at him he was frownin' down on me in puzzlement. I cried and laughed till' mah ribs ached. I could jes' see the riot of the Blue Hairs at the Senior Center when Uncle strolled in. 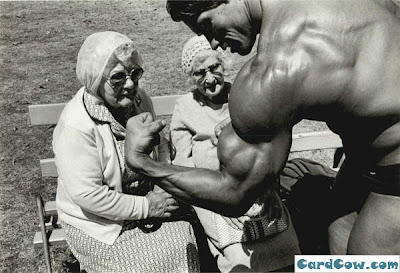 Them ole biddies will stomp each other into grits to see who could sit aside him, offerin' ter show Uncle how to check the "got mail?" box.

"Is ya' finished yet?" he asked with drippin' scorn.

I could only nod--iffin' I tried to talk, I'd have choked ter death.

"It's free at the Senior Citizens Center, Belle," Uncle said, " an' anybody whose 50 by December 31 qualifies. And Charlie Mac (McGill) is goin' wif' me--he ain't got no computer learnin' neither."

Now pets, one thang I'se gonna tell ya--Uncle is a looker. An Charlie Mac gives Uncle a run fer his money when they's facin' the mirror.

Well... back to when I'se readin' the blog to him....he assumed since he was gonna hang wif' the Blue Hairs soon, he oughta familiarize hisself with the blog basics, so he was listenin'....

"An thas' it? Thas' what everbody is talkin' about? Ya jes' type out yore day and send it like a letter into the ether and ever'body reads it? Why would they wanna do that?"

"Well, now, Aloysius " I said, "folks'll write ya a note or two, they encourage ya', or commiserate wif' ya, give advice...ya' know, they experience it wif' ya', I guess. Other times it's more of an exchange of ideas, an thas' real interestin'. "

He looked befuddled. Then he said,

"So, ah...I'd jes' type :' I woke up this mornin', had to poop first thang, ....tried ter put on mah shoes but mah ingrown toenail was throbbin' so I had ter switch to mah hayseeds,.... I came into the kitchen and youse swaddled up in ev'r granny gown youse an' yore mama ever owned,.... an' was all riled up over somethin' youse read on the blogs and hadn't made no cawffee yet, ....and the only thang mah woman said ter me was "the birds need seed," an she din't even notice how temptin' an' handsome I am in mah new Gator shirt,.... an' besides all that, the bananas is oozin' they's so ripe... 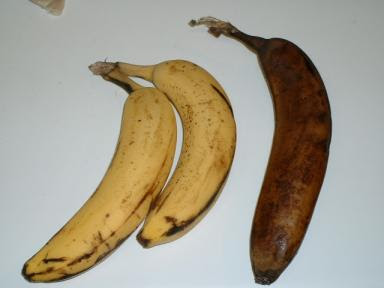 "Wha'? Youse gonna write me up as that Uncle Remus agin? Oh naw ya' ain't, cuz, what iffin' I gits mah own blog? Huh? Two can play, sweetheart...best think on that some. "

I jes' smirked at him,

But he were off on a roll:

"Answer me, Belle, is that IT? Youse spendin' yore time readin' about some stranger's sad-sack bad hair day? Well, hail, woa-man, doan say NUTHIN' ter me again about how much football I'se watchin'--why not turn on a game an watch them boys go on ahead and knock the spit outa some poor sucker?

An' is that what in the hail is wrong wif' ya these days? Blawgs is rurnin' the whole dang world....that they ain't even a decent banana in the house. Why cain't a man at least find a banana when he wants one....is that too much ter as't...an a cup of cawfee.....the whole dern universe has gone rabid-dawg mad...

you visited my blog when I was having some technical problems with my pics... try again!

but it shore wud be interestin' to read about a gun-runner's day.

Swaddled up in evra granny gown you or yer mother done owned....

Man, i was hoping for a cold chicke leg leftover from Sunday Supper, not dry cheerios and oozing bernaners.

dang! If'n that's a picture of Uncle doin his impression of Arnold, then, whooooeeee.
I ain't NEVER gonna bad mouth y'all!

Hey Bird Beauty, Uncle loves that ya' ain't fallin' fer the Aloysius feint...when he came in the door ternight he even as't iffin' they'd been anybody who noticed he was makin' a rare appearance on the porch.

COntessa! ya' got a funny bone tickle outa this heah entry? Hee hee... on the swaddling gowns, this is some insight on Uncle: Ya knows how them DDs is holdin' together? When ya' git one that is tough enough to do the job, he calls it "that industrial strength contraption."

An supper tonight were lake caught fish and cheese grits (Sorry SHE-pup, ain't nine o'them grits left, but I'll make more), 'cause I needed ter step dinner up a notch from last nights veal scallopine and grilled asparagus...cain't eat like swells too often or ya' fergit what honest food tastes like.

As fer Uncle gittin a blog--the very idea cinches mah corset up two notches--BAwgs may be ready fer a comin' out, but lettin' Uncle lose is more'n Aunty can deal wif' Hoo-whee!

Hey Boney!! Goodness but I'se been fallin' down a rabbit hole when I try ter git to yore sight..some alligator hoppin' deal--- I'se warnin' ya' iffin' ya bad mouth us'uns Uncle will take ya down into ter the swamp and put ya in a tree stand ter see iffin' ya can acquit yoreself by shootin' a gobbler--the he will fergive ya anythang.

grrerhahaha! very cute aunty...funny how that brown slimey banana happened to be rot next to where uncle blogs about the start of his day. howwwwl but er, note to self never cough when bending low. day yum its funny and informative. i guess you didnt bother to mention to uncle about the dogfights. just as well i think

is uncle really gonna take a class? guess he didnt want YOU to show him how to blog. grrrherhahaha having had the pleasure of meeting uncle i can SO visualize how well he received your roll on the floor over it.

tell him all your blogger friends wont show up on the porach demanding fishes and grits.

i will go to uncles blog too! lets ALL go. tell him aunty.

oh btw way guess what? i got a card in the mail from the 7 hills.

oh yeah..there aint no nekkid folks in zeitgeist aunty. so check it out. youll like it.

Whew! He barely squeaked in to the SCC ...by a few years.
YKW

hee! hee! hee! hee!...Me' Hubz and I were having about the same line of discussion..him not fully understanding why on earth I spend time here...doesn't really approve fully....then i told him I was going to put up a blog for him so he'd know what it's about....I'd just set it up and he'd just get on writing...welp'..that got him quiet...asked me even what he'd call himself..he! he!

nice to be hear Aunty..hug hug!

What makes Uncle so attractive to the wimminfolk?

Take the TROLL POLL. Tis a subject near and dear, I suspects.

i know....
he can watch football with my 84 year old mama.
she watches cause she likes to see
'the tight little butts' on the players...
she'll tell him all about it too.

I am really enjoying this semester. I have found that I like my classmates. It is a good time for me.

Artfulsub. I ain't shure what the draw is, but it is there. That man has been hangin' off mah porch since I be 15 years old, an' I STILL ain't got it figgered out.

Mayhap it is that he is old-timey sorta fella--he think menfolks is menfolk, an' wimmin's is different and that thas' a fine thang. A'course, that man can dance , hoo-whee, an' that always heps wif the ladies. What else? Lemme see...well, he is one hail of a flirt. Think thas' it?

Hey Luxie--Hubz is onto his own blog now?? uh-oh....doan let Uncle know that..and how soon can we'uns visit Hubz place???

Foamy Lady, yeah...he can sit wif' your mama and while she looks at football buts, Uncle will review the cheerleader's fannies. Ha! They'll make a pair.

Infini, Sugar I'se real happy to know it is a good semsester--and hold them haead bangers at bay!

Anon?? nope I does not No hoo U be.
Wonder who is teasin' me?

by the by...
Walking on Alligators is gone.
I noticed that it was filled with advertisements (last time I looked) but, that's no matter fer me.
I'm beginning to wonder if I need a streaming (or is that "steaming"?) pile of history behind me? I dunno.
But, yer welcome all y'want.

If y'get bored...there's a sidebar address on m'blog fer what t'watch when the tv conks out on a winter's day. It's comedy and other art stuff I keep finding on the interweb place.
Yer in there, too. Though, it was more art and tears than funny, I felt it had a place there.

i think your hubz, my hubz, the luxie hubz and kate's hubz need to get together and commiserate about their blogging wifeys. mine really doesn't get it either...