WHO WAS the PIED PIPER? I'se pinchin' back the mint near the porch at dawn-thirty when Jack Beeman rode past on his spinnin' wheel..thas' his fast spinin' bicycle, what he rides fer exercise to keep his scarecrow limbs scary skinny. He is ex-Army-Marine-Airforce...I fergit which, but he keeps in shape like they might call him back any day.

"Hey Aunty!! I read yore latest post on adultery, blog style!" he called over his shoulder.

When he circled back half -hour later the coffee was hot and Uncle was puttin' out the bird seed. "I heered ya holler at my lady about her adultery- sounds like somepin' I oughta know about. "

Jack grinned that "ain''t we jes' boys" sorta grin, took a cup of coffee from me and held it up to Uncle.

"This here coffee is worth the price of an explanation." He swallowed a gulp and blinked twice, "Lawdy! They is serious bidness in this cup. Naw, looky, I was jes' lettin' yore Belle know I'se readin' her blog....and why, shoot--I have an idea fer her."

"Nope," Jack shook his haid, " but looky, I'se readin' fairy tales ter Mack-man (his boy) an we read the Pied Piper--hoo-whee! Now that boy is scared ter death of rats. " 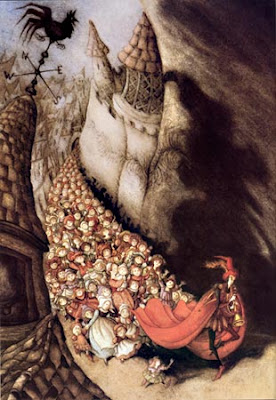 "Doan be dense, Belle, its Gypsies he oughta be afeard of! "


We ain't got no gypsies, Uncle tole him. "Any way, what's gypsies have ter do wif' Belle's blog, or, fer that matter, wif' the Pied Piper? " Uncle ast him.

"Hold up now--I done some research an it turns out that they's Germans in Transylvania."

"So?" Uncle and me said in tandem.

JAck smirked as iffin' we's simpletons. "How'd they git thar'? Thas' is what is so," he said.

"More like WHY did they go there, ain't they never heered of Dracula?" ast Uncle.

He sent them Germans in Transylvania off to Russian mines, never to be seen again."

"OH, well...not much I s'pose, 'cept that ya' could start a history -mystery feature. "

(uh-oh...here's a fella who needs ter git his OWN blog, I'se thinkin' ter myself.)

"The reason Europe hates gypsies, an' thinks they steal yore babies is on account of the Pied Piper was Romanian--a gypsy-- and he piped his tune an' led them little Saxon babes through the Carpathian mountains to Transylvania. An' gypsies make strange music doan they? And they's Romanian too.

See? The way Germans came ter be in Romania is because some version of the Pied Piper is true--looky, this is what even the Grimm boys claimed: "the Children did not perish, they surfaced somewhere in Transylvania. ..In their relative seclusion, the Lower Saxons who have emigrated to Transylvania about 700 years ago, preserved the oral traditions purer and more folk-like than us (in Germany)."

I looked at Uncle, helpless. "What is he sayin'" I pantomimed.

Jack, set his cup down and sighed, "Alright, ya'll. Ya' ain't gettin' it, is ya'? Jes' thought wif Frankenstein as a point of departure for serious bidness on the BACK Porch, (whar' I saw a Troll visited), seemed ter me that ya' could have fairy tales like Pied Piper and Dracula on the Front Porch, but tell whar' they com from, what they mean an all.. how they's real life history is hidden in fairy tales."

Jack went spinnin' up the road, leavin' Uncle and me jes' watchin' the birds peck at the seed. After a spell, Uncle went on in ter shave. I rocked and meditated on the bloggin' life.

Seems ter me, sweet thangs, that we'uns oughta keep them who knows us in real life outa our blog life....they is havin' a harder time tellin' the real from the fantasy than we is..... 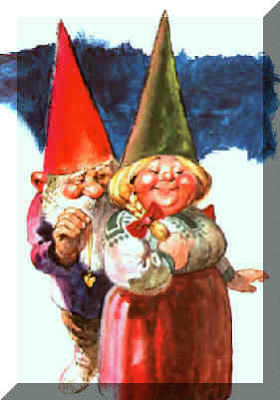 that would be interesting, belle.
the origin of where and how the tale originated. legends and tales, after all, are often based on truth.

about gypsies...
a gypsy group came to town one day and camped in the surrounding woods..
i know this because i saw the camp.
i remember walking to the pool one day in my german hometown as a youth and coming across my brother who had been riding his bike. he was surrounded by gypsy youth who were trying to take his bike away. they didn't because other adults who were walking the path made them scatter.
around the same time i was circled by a different group of gypsy youth who tried to get me to give them toys. i had none on me, of course.. they eventually went away. as an adult i've had gypsy children try to pick my pockets infront of the notre dame in paris. oh, and i've still got a gypsy curse on me, i guess.
there was an old gypsy lady who had been living in our town
forever. she supposedly had been expelled from her group. it was known that she would stop you on the street and beg for change. if you gave her some you'd be blessed. if you didn't, you'd be cursed. i didn't always have money or change on me...lol...so...
i'm not being judgemental when i recount these tales. i'm actually sort of glad for the memory. there's nothing like seeing a gypsy camp in the woods.

On orders from the Count, this year's Halloween(which is his birthday, also the beginning of the
Vampiric Year) takes place in S-E Transylvania, Romania, at his chalet in Poiana Brasov.

We get self-proclaimed "gypsies" down here from time-to-time.

Probably of Irish origin, descendants of the Irish "tinkers", they mostly live in South Carolina. Bout 90% of them use the same last name.

The menfolk "earn" their keep doing home-repair scams and occassional burglaries. The womenfolk (arranged teen marriages) do shoplifting and sometimes engage in the "oldest profession".

There's some interesting real-life stuff involved in Norse mythology. Freya was probably originally TWO human Queens converted to Goddesses over hundreds of years. Then, after hundreds more years, the TWO Goddesses got transfigured into ONE Super Goddess.

The basic Norse myths were probably told for about 700 years before someone got the bright idea of writing them down.

I don't know if the part about her being a great beauty willing to sleep with Trolls in exchange for jewelry is fact-based.

i had a dog named gypsy ... and his mate was called gitane. they - afghan hounds - would steal your teeth if you smiled big enough. we loved 'em tho ... wouldn't have had them any other way.

them's the only "gypsies" i ever knew.

interesting about the legends ...

Foam, darlin' I must say, youse had an real interestin' growin' up time...wow. A gypsy curse? Try some Holy Water and you'll be fine!

But it IS sorta curious how fairy tales that are based on some real history are the MOST interestin' tales of all.

Vlad--hee hee, hah ha..Vlad...youse hilarious! Does we know ya in another spot? I checked on yore invite for Halloween and seems yore invitation is legit! How strange. I mean, folks, there is a real website for Romanian holidays includin' Dracula's castle.

Folks, in case ya' never knew, Prince Dracula's real name is the son's version of Vlad Dracul (his daddy) so he is Vlad Dracula, sometimes Vlad Tepes (The Impaler). Dracul is Romanian fer "dragon".

The family were famous fer fightin' the Ottoman turks.

This is a funny confluence, pets. I'se readin' THE HISTORIAN which is a novel by a lady historian who explores the history of Dracula. Long book, too wordy, but the historical tidbits is somethin'-- an' I got into this on account of readin' about WWI an' the history of the Balkans....I mean, I think I jes' fell down a rabbit hole...one thang led to another ....mayhap I need ter do a post on Dracula??

Artful, whar' is ya?" I mean, do these South Carolina gypsies come by yore place? Norse Mythology is worth a look-see. What was yore favorite fairy tale when ya' was a kid?

yah, i've started reading that book, but lent it to a relative. i reckon i need to buy another copy or get it from the library to finish it.

Hell no, they don't go anywhere near my place. They like breathing.
They pick on the elderly retired folks.

If you count Hungary as part of the Balkans (some do), the Christians there stopped the advance of the muzzie hordes 5 times.

Brother Vlad had a hand in that, and although he might not have been the nicest guy in the World, history can be glad he was around.

Hey hey Artfulsub,
why baby doll, youse up on history, ain't ya???

uh huh...Vlad Tepes (Dracula) was know to have scared the pooh right out of the sultan ..when the sultan rode up to Wallachia and found 20,000 of his soldiers impaled on stakes and set up as a stockade fence around town...now, ya' KNOW that was a stomach turnin' sight!

I read that Vlad did the same to merchants who cheated the people--that he was a cruel sadist, but he turned that cruelty on cheats, liars and Germans who colonized Transylvania .