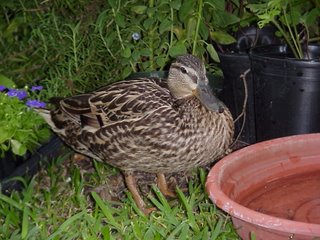 We had rain Sunday morning, early. T'was a storm that drowned out the plainitive wail of the two 2 a.m. train. The rain brought a delicious, cooling breeze for today. Fed the birds some slivers of oranges and of course their seed favorites...the crows fought over the fruit, the wrens patiently settled for citrus soaked kernels.

Wise old oaks gently swayin' and I follow their rythmn in an ancient wicker rocker....a little ole biddy at the end of her Monday, rockin' and ....plugged into her new IPOD nano. No birdsong ...Josh Groban, "My Confession" .... the sun chases the edge of day with a coppery shadow.

Walked an hour this cool morning...plugged into Nano. No birdsong ...Andrea Bocelli, "Ama Credi E Vai" at full blast. Stirring male voices singing with the power of emotion beyond the trilling of any thornbird. And yet what desolation there is in a day without birdsong. Did birds once seek the sound of human song?

A stroll into the garden startles pair of doves as they sip from a drippin' hose. Humming with Josh as I putter about, the pair return to sit on the trellis over the tomatoes, just four feet above the human humming. I hear only Josh but I can see by their throats that they are cooing.

Three years ago a lame lady mallard wandered up from the lake a few blocks away. She nibbled at the buds of flowers growing by the drive day after day until we, entranced by her courage, provided pay for her brave patronage. A week before Easter Lady Duck was escorted by Sir Mallard, she still limps and perhaps is at risk in the lake where gators glide soundlessly. He departed only to return for her as the day dimmed. By week two she knew my voice, and I hers as she quacked demandingly for her daily tribute. Her escort never visited long but she spent her day in the dark coolness under the hydrangeas, turning up grubs as she went about her rounds and I mine.

After Easter we did not see her ....until she came the following year, leg less gimpy than before and no escort in attendance. For weeks we continued the old routine as if the sun had not made a full orbit since last we met. Lady Duck did not reappear the next year. But somehwere this year a Finch has made a friend on a balcony, perhaps seeking human song as well as seed.

The pathway lights twinkle on, birds have risen to their nests, the feeder is quiet now as I walk one last time over the jewel green ground, a gift of the rain. Groban's baritone plea penetrates the heart, "Remember When It rained."

hi aunty belle. that was just gorgeous; beautifully written. how nice to find refuge from politics and human agonies for a moment. the lady duck is lovely in her understated coloration. what a gift to have had her for 2 years! your home sounds like paradise. i am happy you are blessed in this way.

I jes' wisht' I knowed how to do like that preacherman Rev X and put that music on this blog for ya'll. Would love for yer ears to hear Remember when it Rained...sigh.

Ahh. Can't have enough of the duckies -specially the babies- and nice words to go with it. Got some maself at the Blopix if you want to walk down 192 to see'em. Bring some'em rinds witcha.

Q! Youse got ducklings? Jes' today I heard some cheeping and looky--there waddling was four of em' frantic in urban yard...I'se praying a cat doan git em' fer a snack.

this is lovely. a different side of aunty belle. so glad you wrote this.

glad to hear you got some rain. i have been trying to send you some of ours (it's back this evening...)

Why thanky, Bird Beauty, I'se wondering if you sent us some of yore rain...as for "different fare. why this is the FRONT poa-rch and I should be minding my duties to civil exhanges, I s'pect.

Why thanky, Bird Beauty, I'se wondering if you sent us some of yore rain...as for "different fare. why this is the FRONT poa-rch and I should be minding my duties to civil exhanges, I s'pect.