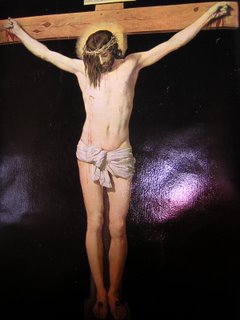 you maak goed choice met zurburan is master of Christo kunstart. is very solemn day. K9 did maak image but i correct it from being zonder gravity. i maak image of the Lam for hes yard. Aunty, i leaving now for 3 uren. lenten blessing i maak for you.

well since i am already in the dog house i can correct freya; grrrrrrrrrrrrrrrrl, that is velasquez

so explain this to me Aunty Belle- as it's something I have struggled with all my life - the christian penchant for images of christ on the cross. i realize that he was sacrificed for all of you is an important part of the story, the philosophy, etc., but the image of christ on the cross is the predominant image- this image of torture - of man's inhumanity to man and god - this image of death and suffering seems to take center stage instead of an image of love, compassion, good works,resurrection.

well, gracious Freya, I see the dawg is now an expert on great masters, huh? It is Velasquez, but Freya, I happen to be right partial to Zurburan too, whose backgrounds can also be stark, a wonderful play of light against the dark, a subliminal message, I reckon. And Caravaggio!! Happy Easter pups! Christus Rex

Thanks Temp--so pleased you dropped by...and you too Hail Pig, I'ma thinkin' on that steak feast yore hostin'. IS they gonna be some chocolate too? Gotta have some good choc on Easter.

Bird Beauty, thas' jes' a very fine question--Why DO them Christians insist on wearin' and displayin that cross, sometimes wif a bloody and beaten Christ on it?? (a cross is without the body, a Crucifix has the body or corpus on it.)

WHY do they do that??? It is a sign of the greatest Love even known. That the innocent God-made-MAn, the author of the universe, would love us enough to subject Himself to us.

You say it is too much about man's inhumanity...and that is it precisely--you do know why after all!

See, we wasn't created to be inhuman to each other---rather to be fully and delightfully HUMAN. All the same, we have free will which God jes' won't snatch back. (Otherwise we would all be marionettes, huh?)

But onct' sin was loosed on the world then inhumanity was one of the first consequences--Cain murdered his brother. We have free will, but we can freely choose do do the evil thang.

So the cross is the sign of the greatest love ever--that God became man to show us how to be fully human,--He is the antidote to inhumaness-- and there were some who hated him for his goodness,and killed Him because of it.

Only a truly good human could pay the price for the sins of all of us --each of us have chosen to do evil at some point--this can sound harsh to our "modern" ears, on account of some o' us doan even think there is such a thang as sin...so for shorthand, what if we think on it similar to that string theory discussion we had.

This is a rough sketch, but we know tht there are planes, or dimensions that we do not see but know are effective--like soundwaves or microwaves...and we all are familiar with the ecology gurus who say that it's all a web and whatever you do to one species or habitat, it affects others on the t'other side o' the world...and just as light has its own laws of physics and soundwaves etc...in the same way there is a moral universe, and it doan need our permission to be effective--we can reject belief in the moral reality, but its laws continue to work with or without our acknowledgement. And any breach (sin) causes a disrruption in unity of thw whole--much like the ecoclogy analogy.

Youse know about the "unity in diversity" thang? Well....we'uns been lookin' at art heah, so do ya'll know Hieronymous Bosch or Brueghel (sp? )...now those paintings are full of Diversity, ain't they? ALl types of folks (ugly/ pretty, rich/ poor , tall/ short, lazy/ industrious, etc. Lots os diversity. But they's a unity too--in fact, you gotta study the entirety to grasp the unifying principle at work in what the painter is a-sayin' to us...

The moral universe is like this too--the unity is ripped iffin' we sin even a little but, but if we --or millions of us-- sin big, well, now the picture becomes real chaotic and ugly and needs to be set right so we can see how it oughta be.

Enter the perfect Man, Jesus Christ...he paid the debt for those rips, mended them--or to be precise, makes possible the mending process IF we cooperate with His Grace and live morally.

Here's the good part--the theologians call if "felix culpa" or happy fault (That Adam and Eve messed up) so that God would become Man and show His incredible love for us in a manner we can understand.

This can seem strange without a heap o' backgound, but jes' keep in mind that BEFORE Adam rebelled and let evil into the world, we were not created to die, we were created to "walk with God" and, as we matured, to go on to our divinity (The lost dream scene that seems to be in every culture). Afterall, out souls are forever--they do not die.

But sin put an everlastin' end to any divinty for us'uns--since nothin' evil or imperfect can enter into a perfect eternity.

SO God, filled with pity for our mess-up, sent Jesus to become the perfect Man and to make a bridge--so to speak--for us to get back to the divine side of things, via Jesus Christ, rather than for our immortal souls to spend eternity in anti-divinty (hell).

And thas 'the short version!!

Happy easter to all!

Uh...not so sure that is clear Bird. One last thought:

The REASON that Christ died --is sacrificed for us--is that only perfection can satisfy the requirements to restore perfection. Anything less cannot restore perfection, would only be a pretend patch on thne cosmos. His pure and infinate goodness is the ONLY antidote to evil. The cross is the sign of that sacrifice.

I'm sure you won't mind, Aunty Belle, if I continue as I started.

Well that Jesus was the son of a god.
Any god.
That bit.

But maybe that is a back porch kind of issue...

Ardlair, no puddin' thas' a fine topic for Front Porch. It's ok that you doubt it--that Jesus was the Son of God--it's just fine to doubt as long as it leads to the question WHY do you doubt?

Some doubt it because they have not seen credible eviidence of the claim--ok. Thas' reasonable, but it does suppose one is open to the evidence.

Or, Ardy, is it that you doubt because to believe it would require an alternate worldview and behavior pattern?

They's a plenty o' folks who a fanatically holdin' to an atheist position jes' to keep form facing a change they know needs to be made.

OThers are gen-yoo-wine-ly not sure, but those are technically agnostic.

There is, quite patently, only one fanatic on this site.