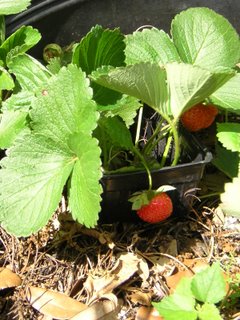 Last week the United Nations' Convention on Biodiversity upheld a moritorium on Terminator seeds that's been in place for six years...I ain't no fan of the UN, and we know that the UN was about to knuckle under to big agriculture interests, but smaller farmers proteted worldwide to keep these frankenstein seeds in the labs and out of the fields.

Monsanto has aholt of a patent for Terminator seeds--seeds that grow genetically engineered terminator plants. They will grow jes' one season, and the seeds they make won't germinate, but worse--this plant will kill, "terminate" any plant that it pollenates. This means that when the wind blows the pollen of this plant across the field to yore own patch of strawberries, why mah pets, this alien fiend will kill yore berries!

This terminator technology is meant to make sure you doan "steal" Monsanto's fancy seeds that they spent billions of R&D $$$ on. So if you buy their fancy hybrids, you cain't save the seeds for next season--nope, jes' cause they want you to buy a new batch of seeds each time youse settin' out yore garden, they's willin' to kill any other in the species nearby--Lawdy, sounds like a famine is a 'comin'. Think, when they's nothin' left on earth that will grow but Monsanto seed , why, they can name their price for a packet of seed.

right on aunty! see people? there are things way scarier that GWB! For once the UN did something right. whatta shocker. but who knows when they might flip flop on us. i remember a story about a corn blight in north america that killed all the corn grown from some new fangled fancy seeds. and the only plot that survived in the area was one that had been planted with seeds harvested from the previous crop.

this is a big deal. freya talks about franken food (hell, franken-everything) all the time.she says monsanto is a monster. might have to grow personal crops in a greenhouse someday just to stop seed terrorism!

I am going to your links.

s'OK K-9....yeah Hail-pig is one luv'd guy--nicknames is a sign o' luv!
Jes' doan ever call him a barrow--he'll be comin' for your doggie parts.

i dropped by aunty belle to thank you for the call at my nest - lovely haiku you left there.

and maybe some day, i will share that poem with my daughter (she is 19), but certainly won't share it now. maybe after she's a mom herself and has experienced a little "rain" in her life.

i can't recall where, but i read something about ...well... you know, the US is a big promoter of gentically modified seeds - cause its good for US "bidness" interest. smaller farmers don't like the "regular" gm seeds either, but they're often forced into using them. i'll have to down the source, but I've read that sometimes US foreign aid comes with a string - use these seeds or forget about aid.

best strawberries and tomatoes i've ever had have been the ones i've grown myself. can hardly wait for planting time.

Sweet Bird, yes, yes! Share yore poem with yore lady chile'....Aunty doan want much rain in yore daughter's life--but when she is older/wiser, she will be much changed to know that she was conceived in such love.

On them terminator seeds-- youse right, we (USAID) did have a program of coercion on them seeds for a spell--1997-99. Then all hail broke loose when the reality sank in like a rock in muud.

I spoke wif an Indian (India) agronomist womman in 1999 in yore very own city at the State of the World Forum. She tole me the horrors of the thang--butterflies needed to pollentate crops, but when butterflies landed on terminator plants, they got sick and died!! No butterflies, no pollenation, no crops, BIG famine. Lawdy Mercy!!

SO Bird Beauty, when ya' gets yore tomatoes and berries going, save some seeds--youse never know.

there's an episode of The Simpsons in which a toy company programs their toys to attack and destroy kids' other toys... the idea being all their toys will eventually have to be from that one company...

you know Monsanto is evil just by the fact they used to have a pavilion at Disneyworld...

yep bogs. that's the RAT for ya.

Bawgs baby, that is an awesome watchband! Mah favorite color is green. Yep--the RAT is a blight--oh for the sleepy town that had only a navy base to give it a claim--no world class RAT. Toys that attack toys--hmmn? Clever.

Dupont is also part of the conspiracy--they try to buy patents that threaten their own products--recently one patent alone was a cheap substitute for about 30 % of the Dupont commercial line of products, about 10 % of the industrial line...they muscled the inventor, threatend etc.

Nefarious doin's a goin' on, pups.

As long as they don't kill my chile peppers that I plant annually,I make my own chili powder and cheyenne powder,and dried Thai peppers,and habanero salsa.my fifth consecutive year should have all the kinks out hoping for a bumber crop.

What would the UNfair be called? UNnatural.
Monsanto, Equal, Splenda, Sweet N Lo,
transfats, GBH, vaccination, Lost, X Files, The Forgotten, Dr Phil, Fox News, The Daily Show, The NY Times, The Masons, Los Alumbrados, The Skulls, Doctors, Lawyers, Churches, Aliens, K9, Ben, Me. This is the eco/uni system that we live in and are contributors to in one way or another. Awareness is the only weapon left to combating it all.
Here is an experiment.
Ask any kid under 20 (sometimes much older) to share their thoughts with you. No surprise, heh?
Picture this:
The top of the head is cut around like a watermelon, the brain is removed with lots of care, put it on "delicate" cycle on the washer, let it air dry a little bit, place it back on the open head and utilize a laser stitching pen to seal the wound; then go ahead and ask:
"What color is the white horse?"
The answer will be:
"White of Course!"

Aunty, the "public speaking" that i engage on is daily to 10 people at a time, sometimes 20. They poor souls have no choice but to listen to me, some of them are terminator plants, some are wild weeds and some are neglected St. Augustine grass that I must somehow nurture and enhance their turf. I like it.

the previous post is one of the best i have read in a long time. im not even sure i got all the quords meanings fully but the layers the flow and visuals were excellent.

Q, youse onto thangs--I'm duly impressed. The patch of St. Augustine grass thas' got you fer friend is fortunate indeed.

The Dawg is right--