Stream of Comatose + What is This Gun?

The birds is hongry, but they'll jes' have to git to work the ole fashioned way 'cause I ain't wading into the humidity to fetch 'em no bird seed. I usually feed 'em, like the Dems feed their constituents, so I can watch them entertain me.  Not today.

I sliced up some peaches (organic) an' added a few blueberries (not-organic)--t'were healthy 'til I drowned 'em in a creamy lake of half 'n' half (organic). 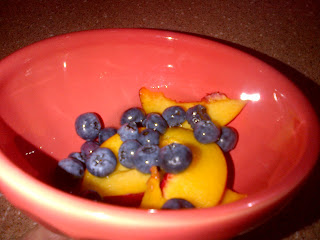 Can y'all tell?  Aunty is in a mood. A dangerous place done grown up around me like Sleepin' Beauty's thorny thicket. Inside this place,  I'se nearly comatose.

I has so much to do that the brain be near'bout paralysed, so, I ain't doin' nuthin' (constructive).

Yes, yes, the buggy barn is a horror show--Uncle an' me is both guilty (I can admit that right?)--all summer jes' tossin' stuff wherever, now it will be a weekend chore.

Of course thar's a deadline (two).  Guess why it is called a deadline?  'Cause editors can kill yore article, thas' why.  (fer the uninitiated, editors set yore deadline early so they have plenty of time to do their part wif' highball in hand, Cole Hahns restin' on a leather ottoman. I know this on account of a few editors who respond to mah pleas fer another 6 hours, "No prob, Belle. I have three other articles waiting for me anyway, jest shoot it over by Monday, 8 a.m."

What?  I'se sleepless an' stiff, bent over the computer wif' nuclear panic, bald patches show whar' I'se ripped handfulls of hair from mah scalp while  slinging words around, rearrangin' paragraphs, callin' on the  gods of Thesaurus, prayin' fer the sun to stand still in the sky so Thursday 4 p.m. cain't arrive a'fore the last jot an' tittle be spellchecked?)

I'se limp. Not as in languorous, which can mean a dreamy inertia. Oh no, this heah is flaccid, a torpid stupor--think Dali clocks. 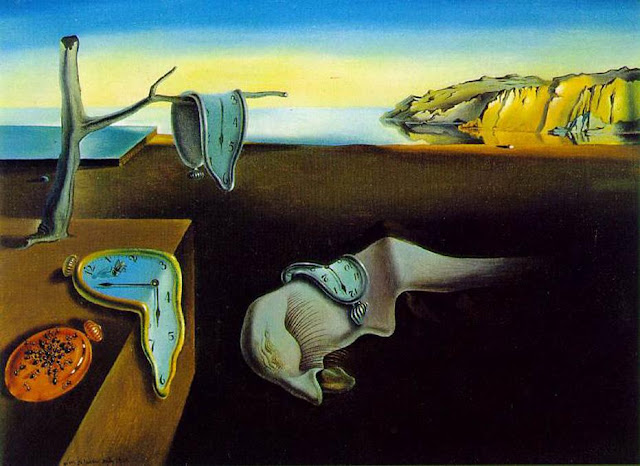 Ain't it jes' mah luck that Uncle is on Prednisone an' thinks he can leap tall buildings in a single bound. He gives me the pip.*

Uncle be off now to some pawn star thang or whatever such is held fer hunter-gatherer tools. 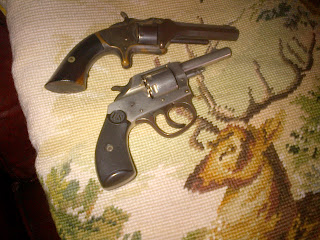 He has hisself a bag of ole funny guns that he's hopin' some folks will know somethin' about.  That bag bidness? Y'all, I had to rouse mahself from mah enervative state to forestall an embarrassment of epic proportions.

Me: "Aloysius,  on account of mah mercy, I ain't gonna let ya' go to no gun emporium wif' a pink bag full of
derringers."

He is especially curious about one specimen wif' an octagon barrel an' the hammer under the barrel--say it be some sort of  crude "coachman's gun." 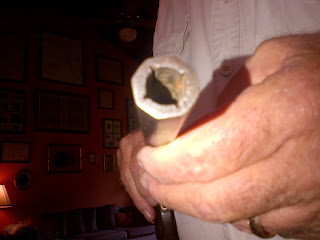 I'se pleased to see him take his Prednisone jazzed up self off fer a spell.   'Cause, dear readers, I'se so swamped wif' chores the onliest thang to do is to go to bed wif' Aurelio Zen an' a Long Finish.

a. A disease of birds, characterized by a thick mucous discharge that forms a crust in the mouth and throat.
b. The crust symptomatic of this disease.
2. Slang A minor unspecified human ailment.
Posted by Aunty Belle at 9:04 AM

The book sounds delicious. Were I able to read anymore I would bite that apple. Poe sold me on the idea.

As for the rest? Oh? Join the club. Now, you have to give that my limits make my doings much smaller, but that often ends up with more work than even you have, it just never gets done. So... Still, the deadline part? Well, I do have to get my plates, I'm in "one month grace" period. And, yeah, for me, that will be a test. Still, I hear you. And actually would not trade you places. I think... you are having it worse than me at the moment. :p

If I were to say, it looks like Uncle has a belly gun, for dandies and gamblers (top), and what... a 20's .25 or .32 (ish) belly gun as well below it, for suited businessmen of the time. I can't tell much about the octagonal barreled gun, save that it looks... bored out by hand, not machine. Something seems a little off, if that isn't quite the case. Might just be age, my eyes, or the pic. Not an expert, just... I like me some guns.

Organic? Bah. Nuff said. Specially in the mood you are in. *evil grins* Hey, but at least you added the proper accoutrement to make it fine dining. Though I stick with full heavy cream I understand variance.

Breakfast certainly looks and sounds divine.
Deadlines not so much. But you'll get it done .. :) And hair grows back. And after all that stress? Make sure you treat yourself right.
Prednisone for uncle ... Hmmm ...
I once was on that drug. I was so hyped up by it, they put me on a prescription downer too. It worked.
Don't know anything about guns. The barrel of this gun certainly looks aged. I do think it would have been a hoot to carry all those derrengers in a pink tote bag though. Did he ever take a more 'manly' bag?

Uncle called that littlest gun a "card player's pistol" so reckon y'all is on the same page. The octagonal barrel is on an' old gun--it has some engraving on stock an' barrel, but Uncle thinks it's been tinkered wif'.

the peaches were really good. Too often they's a disappointment.Of course, I done Uncle a HUGE favor an put them toys in a Man-tote I think some clever ETSY crafter could come up wif' man-bags.

I met two of my deadlines today. Do I feel good? You betcha. Until next week when I may have to rework it all. But for now? I relax.

Seems like deadlines are looming for all of us. If we all stay calm we make keep this group together. I hope so.

As far as uncles guns. It doesn't matter the package, as long as they're lethal when you need them to be. Who cares. Not sure about the one on top, the lack of a trigger confuses me. The short magazine would suggest a light round. The second one. Looks like nickel and with the U.S. emblem. Says to me Navy. However in the short search I made a couldn't find it. Interesting that there's no forward sight. From the look of the octagonal barrel it's likely hand forged somewhere between 40 and 50 caliber. Octagonal barrels were easier to lock into vices and machining equipment. With more information I might be able to help identify them.

Moi: Nice to see you. Enjoy a break from your labors on this Labor Day weekend.

He he he,
Haven't heard of someone with the "pip" in quite a spell. That alone gave me a fine chuckle Aunty.

Mercy indeed to not send a drugged up , color blind man off into the world of gun traders toting a pink bag. He could be mistook for a sissyman. It will be interesting to see what news of the guns he totes home.

I like your breakfast just fine, although I have to have a shot of good protein in the morning to get my synapses to communicate.

About those Cole Hahn men, well they is accustomed to quality of all sorts so they know a good thing is worth the wait.

Hope y'all have a fine weekend not laboring in the buggy barn!

Moi,
youse earned yore rest. An' had I any heavy cream on hand, I'd have used it!

Karl,
that wee SNS is made by USArms company. But thas' All I know. The derringer, is a Sharps, it is a four shot sweetie pie that, Uncle reports, is gonna be spruced up some by the gunsmith in case Aunty ever has need of a such (!!) I hope he means as part of a costume.

Fishy,
as a clever design maven, cain't ya come up wif a Man Tote? Uncle cain't be the onliest fella what needs one--thang is he has a leather satchel thang, jes' needs a smaller somethin' mebbe of canvas an' leather--no bigger than these trendy cloth grocery carry-alls.

Aunty ,
I reckon gun holsters have been around a good long while. To my eye they are a better look than a "fanny pack" or a " cargo pocket" half way down their legs.

Last time I had to send Blowfish forth with a tote ... I packed his stuff in a handsome leather camera bag. He must of liked it, he went out the door struttin'

love the "pip", it is one of my father's favorite terms for being a bit under the weather, particularly with digestive difficulties :o)

Nearly as good as my college biology prof whose favorite illness euphemism was the "green apple quickstep" when things went bad with the system.

Bonus tips for learning to play the violin Extra tips to help you out FF: It's perfectly clear. Unfortunately, via Skype, the audio of course... Scroll: It is located at the top of the violin. Usually found in the old style violin and decorated with hand craved material also from others decorated things. Hopefully this is going to help you on your road to learning to play violin and will assist in making sure your instrument is around for many years to come. Violin and piano, Tetzlaff and Andsnes