Jes' Another Tuesday Around Heah


This mornin' he be frustrated as a squirrel wif' a plastic peanut. He tried to reprogram the buggy barn opener--no luck, so after 20 minutes on the phone wif' some 18 yr. ole  who gave this wise advice, "You may need to buy a new unit" he decided to replace the battery in his remote key thangy--similar results. 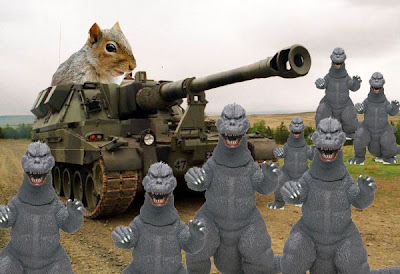 Aunty's job in all this is to keep his masculine spirits up an' entertain him wif' news of the day--or choice tidbits sure to keep his blood pressure up to speed in case the mechanical woes ain't sufficient fer that.


By the time the remote key were spread over the whole table Uncle wuz primed fer Ted Nugent tellin' Piers Morgan to "suck my machine gun."

Two trips to the Office Mart  fer printer ink--the first to get the ink, the second to return the colored ink fer back only ink--an the poor ole fella were ready fer that Swamp show--a step below American Pickers  (which name Aunty thinks is revoltin').

"Aunty!" he hollered. "look up that show,  YA DOAN KNOW DIXIE, the one we seen on History channel--is it On Demand? I need to heah how them Cajun boys teach that as long as thar's ditches, thar's dinner....how they always find somethin' to stew or fry when times be tough."


"Aloysius, times is tough enough wif' out yore thinkin' to catch our vittles in no ditch."


"Ain't thinkin' to eat it, Belle, jes' to catch somethin' in an urban test of mah wits--fer shure I cain't master urban batteries or ' ink  101. Catchin'  or trappin' or gigin'? That I can do.  By the way, they grow Tilapia in ditches--I seen it in Honduras." Funny, S.B. has been itching to kill or catch or clobber something, too. Summers are his downtime (too hot to test out in a switch yard), so he's restless and eyeing the squirrels as targets. I'm all, whatever. Just don't expect me to skin 'em and grill 'em.

As for Tilapia. I don't get the appeal. It tastes like trash to me. Now I know why.

I eat tilapia at times. The main thing I dislike about it is that it comes from so far away.

So, ya got any ditch killin's in your kitchen yet?

Foamy,
no didtch kill yet--tho Uncle say he seen plenty of otters in the ditches of the huntin' camp.

On that You Don't Know Dixie program thar' wuz some real funny lines on food. Heah's one fer ya' Foamy: "If you put a NC BBQ sandwich on yore haid, yore tongue would beat yore brains out to get to it. "

No, no, don't kill the otters, Uncle!

Aunty: I am busy trying to bask in your eminence and unpack your labels.

I am also trying to apply the following phrase to the czarist household, and I am coming up stumped: "Aunty's job in all this is to keep his masculine spirits up."

While I seem to lack most things considered masculine, I don't see anything particularly feminine going on either. Except I weep at plays, although not musical theatre, unless my kids are performing. Then all bets are off.

They always have tilapia swimming around at Your DeKalb Farmers Market, which Chick9 can probably back me up on. I never cared where they came from. They were right there in the market. City boy, you know.

Nor did I ever buy them either.

My favorite Dixie food line. Friend years ago told me about a story he'd read in the paper in NC about a barbecue place that served only chicken, and was out in the fields somewhere. Apparently it was excellent, and they had no utensils. When asked about this, the proprietor stated, "If we gave these people forks, there'd be food flyin' all over the place."

We're actually in the BBQ business. I'll have to check out this Dixie show.

I was watching Dirty Jobs once with that Mike Rowe (woo!) and they showed how they raise tilapia; I have not eaten it since and never will. Makes me want to barf just thinkin' about it.

when I saw the tilapia ditches in costa rice, that gave me pause - i never order it. and you dont wanna know about shrimp from ditches in indonesia. erp. No, its gotta be wild caught for me to eat.

GMO mosquitos, what in the world could go wrong?

only this time, hepped up on GMO

Send him over to Tampa or S FL to hunt swamp eels. They'll be good practice for huntin' pythons in the Glades.

They never learn, do they? If their wondermous idea doesn't work, their solution is to do it more. Still not working? We just haven't done it enough yet. Didn't science used to identify a problem, then seek a solution? When did it all turn into a giant, perverted Jeopardy game?

******
Here's another monsanto bit for ya:
Farmers Seek Legal Protection...

Oh dang.
I wrote a lengthy defense of tilapia yesterday and came back to see what you thought, but it apparently never made it once I clicked "publish".

Once more with feeling ...

First, while it is possible to raise Tilapia in "ditches", the big foreign farms mostly do so in ponds.
Your photo is not of a tilapia ditch, but a nicely designed aquaculture pond with a central harvest canal for draining and concentrating the crop.
The pond has been drawn down and the farmer is allowing the sun to dry and sterilize the bottom.

( I wish I had that pond in my backyard)

The secret to good, safe tilapia is to buy American and pay a little more for your fish.
Asian and Central American fish farmers do use some questionable practices, and my big concern is water quality from unregulated foreign fish farms.

If you don't like the taste of mild, sweet, white fish , then go ahead and hate tilapia. Raised correctly, they are excellent and compare with flounder and whiting.
I know, because I have raised them, before the state permitting process became so crazy strict.

This is a perfect opportunity to buy local, buy American, and support a small farmer.
Or better yet, grow your own...Two things you promote regularly on the Porch.

In most of FL, you don't need a permit ... I am one county over the no permit line ... arrrrghhh.

Around the world, tilapia feed millions of people and provide a living for small farmers, simply because they are "crowdable" and so prolific. Feed to edible protein conversion is much higher with fish than fowl, swine, or beef.
Your supermarket chickens are raised in horrible crowded, filthy conditions and your supermarket cows are fed chicken manure as a protein supplement.
Yummy.

Personally, a tilapia from a clean ditch sounds pretty good compared to that.

Well, eggsactly--Aunty aint't against Tilapia as a species of yummy fish, jes' the farmin' conditions fer most of the fish we see--an' of course iffin' ya git it local/ Florida, much of the concern is erased. Fer the record,youse right on fowl or filet---but ya' know we are venison consumers, an' I does buy local free range chickens an' cain't much stomach what I know they use in fast food chicken places.

Good response--an' I'se sorry to learn yore county is an obstacle on the matter of tilapia farmin'.

Unsigned in Aunty ( from beach whar' I'se typin' on this phone thang.)

And what a wealth of information and training. It is an example of owning just one stock. The stocks depend on the marketplace and economy fluctuations, which of course, in turn, depends on the happenings at the stock market. The International division's revenue plummeted 5.0% to $846.1 million (in U.S. Fill'er up." Those three words hurt a lot more than they used to.