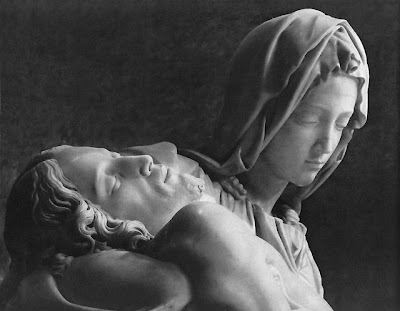 The solemnity an' sorrow is so profound: the Mother who could not leave her Son alone on the cross--who endured a soul shattering spectacle as the vulgar soldiers cast lots for His clothing an' jeered at them. The hymn has inspired Hadyn, Vivaldi, Palestrina, Dvorak and others to write their own versions. This small section is from Palestrina: 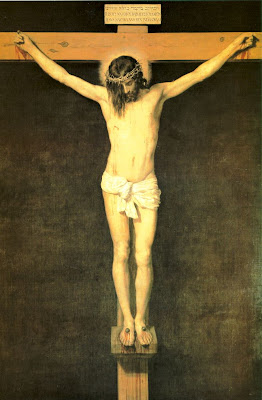 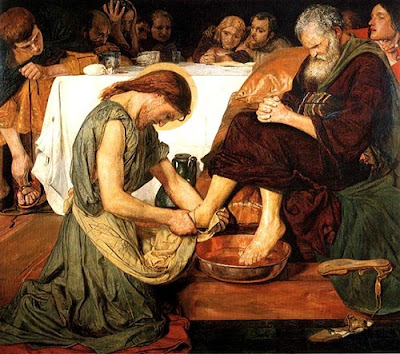 It was just before the Passover Festival. Jesus knew that the hour had come for him to leave this world and go to the Father. Having loved his own who were in the world, he loved them to the end.

The evening meal was in progress, and the devil had already prompted Judas, the son of Simon Iscariot, to betray Jesus. Jesus knew that the Father had put all things under his power, and that he had come from God and was returning to God; so he got up from the meal, took off his outer clothing, and wrapped a towel around his waist. After that, he poured water into a basin and began to wash his disciples’ feet, drying them with the towel that was wrapped around him.

He came to Simon Peter, who said to him, “Lord, are you going to wash my feet?”

Jesus replied, “You do not realize now what I am doing, but later you will understand.”

Jesus answered, “Unless I wash you, you have no part with me.”

“Then, Lord,” Simon Peter replied, “not just my feet but my hands and my head as well!”

These poignant verses illustrate the love that Christ has for His people---a love that beckons, not a conquering command.

Tenebrae means "shadows" or "darkness." Many Christian traditions still include a Tenebrae service at the close of the Holy Thursday, or, more properly, at Matins
(shortly after midnight). It is a time of mourning, lamentation--a sorrowful inward examination of our own failures, a lament for the suffering of Christ. Since the 5th century churches have extinguished the candles during Tenebrae--a gesture rich symbol: Jesus is the Light of the world, but where the Light is betrayed, darkness overtakes us.

You can hear a short selection of the classical Tenebrae music here.

In the gospels it is during the Last Supper that Judas departs on his errand of betrayal. It was not a sudden decision. Weeks before this passage for Holy Thursday, Judas' heart was growing cold. At the discourse on the Bread of Life (John 6:70) Jesus indicates that one of the twelve has already turned against him. The betrayal is completed on the night that Christ again teaches them that He is the Bread of Life. One can have some sympathy--perhaps--for Judas; he had hoped for a military king who'd kick out the Roman oppressors. But what profit is there in any new king/ military coup if one's own heart remains corrupt; flaccid hearts incapable of sacrificial love? Would /could society be any different unless we ourselves are changed? 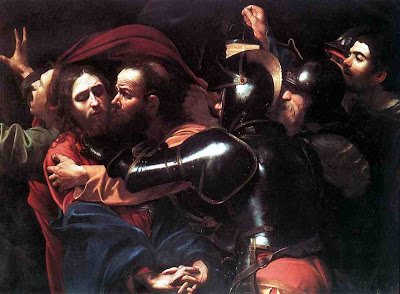 Caravaggio's "Taking of Christ" when Judas betrays Jesus with the kiss of friendship.

Having had no religious education growing up, I read this several times and I have to say; it was extremely interesting.

I've been so entrenched in work and other issues this week, I forgot all about Holy Thursday. Thanks for the reminder. I really need to take a break . . . And it was good to hear from you!

this was an incredibly beautiful and poignant post. and that tenebrae -with all those minor notes - was the perfect soundtrack for the paintings you selected. I always look at a collection of crucifixions during tomorrow's 3 hours - this year I think i will spend it in the garden -wide awake. Your words of a flaccid heart and the corruption of the body politic are well placed in this context. the betrayal never ends. have a blessed Easter dear Aunty; it is good that you bring us these gentle reminders - it reminds me of the wind versus the sun in a battle to get off the travelers coat - gentle warmth achieves much.

Aunty, so good to hear from you. This is a beautiful post. The reverence is catching and this post has filled me a bit where I've been lacking. Thanks for a bit of lesson also. Happy Easter to you and yours.

Thanky for yore "extremely interesting" comment. Ya' know....I gits worried whenever I'se of a mind to relate a religious thought--doan want nobody round heah thinkin' Aunty be a proselytizer or nuthin'. I reckon part of Aunty-ness is that dimension of her, so some of it is a given, I s'ppose. So it be natural fer some heightened content at Christmas an' Easter, right? As for more--why, shure thang--lemme put a bit more detail on Ether Capacious later today.
(follow link from main page or http://ethercapacious.blogspot.com)
Happy Easter B-Babe. Did ya git them puppies some bunny ears??

Moi , Cherie!
happy Easter--yes yes take a break. It's a good time to bake us somethin' wif' peeps in it fer Undaunted Baker--which seems to be orphaned. Ahem!

K9, dear wee Pup,
thanky. Tenebrae music--based on Psalms and the Book of Lamentations --breaks mah heart. It do. Think of the starvin' child angry wif' the world--who slaps the bowl of soup outa the hands of the kind soul who comes to help. Thas' us'uns. We reject the what we need most an' then wonder why our souls is starved?

In body politic terms--I'se so troubled.

I'se a believer in "American exceptionalism." Not sayin' we's marked out as inherently better than other folks at the level of marrow. But I is sayin' that as a new nation we CHOSE God. It's in the founding documents, it's the motto on pour money--it may be mammon, but we remind ourselves wif' that motto, In God We Trust, that mammon is only a tool, but it be God we trust. Our songs note our choice--America the Beautiful. It's in our Pledge of Allegiance
"...and for the REPUBLIC for which it stands, one nation UNDER GOD..." The "exceptionalism" of America is her deliberate choice to place herself "under God" not under men deemed kings or emperors.

But now we's turned away from that choice--yep, we's gone flaccid of heart, an' *darkness approaches.*

In the gospel account of the Last Supper, Judas has a chance to turn back when Jesus washes the feet of the Apostles. He could have let love and service become his model, as Christ indicated they should do.

But Judas, ah, the politician--he wanted a Messiah that would kick-but, an all -powerful king:
Then he, Judas, would be among the powerful elite that surrounded the new king. Judas wanted to be an overlord, a mighty man over the people. He had already stolen money from the Apostles reserves used to assist the poor. Yet, he claimed he could use the money "wasted" when the woman poured expensive oil over Christ; "Why was not that perfume sold and the money given to the poor?"

How loud is that echo in Washington???? All the henchmen stealing from the people while claiming to set up programs "for the poor."

Judas took bread from Christ's hand, then turned an' betrayed the Hand that Fed Him!

That section of the gospel ends prophetically, "After receiving the morsel, Judas immediately went out; and it was night."

Went out--into the darkness. If America betrays our national grounding--In God We Trust-- then we too will go out into the dark.

That baby is so beautiful!! Gimme that man-chile'.

Thanky fer yore sweet comments--we's all lackin' at times. Thas' why I love Lent--gits me focused, headed back to a more aware living.

I think your devotion to your religion is exceptionally lovely and makes me happy to learn more about something that brings you joy. And... it brings me joy too.

NO bunny ears. Yet.

Very rich in tradition, I once took "do not put one day before another" literally. I think traditions like your are invaluable. Wish I had more.