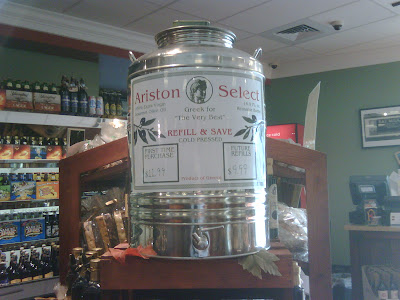 Mah tolerance threshold fer this sorta thang be low--very low. So, within the hour I give mahself whiplash jolting left into a parkin' lot:

"Whas' THIS?" I said to nobody in the passenger seat.

Jes' in time fer the crush, a new store done open in a neighborin' village. The Meat House. ( locations in other cities too) 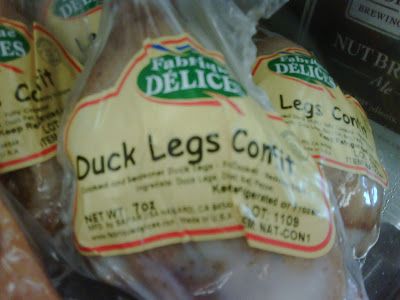 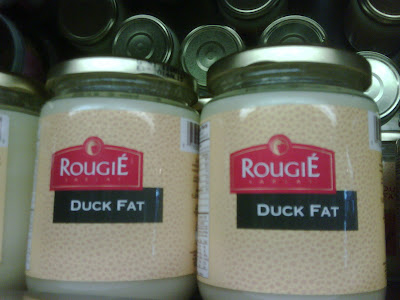 What Aunty came home wif' is an artichoke an' cashew pesto--yep, it is eyes-rolled-back-in-yore-haid good. 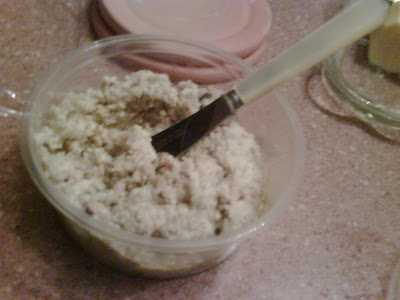 Fortification, ya' see, so that I can wade out again --ah, yes-- to do what din't get done in the first place, when I wheeled into The Meat House instead.

How's all y'all farin'? Hope youse better at takin' advice Granny give me--but I never seem to follow: Finish it all-A L L --a'fore Dec 15 so ya can have a few days to be Merry an' not frazzled.

See ya at Karl's fer Haiku Monday.
Posted by Aunty Belle at 7:56 AM

I am not a chef, but if I had access to duck fat I would use it as an occasional option instead of lard, tallow, or olive/peanut oil. Though I would guess that duck fat is beyond my humble means, usually. (Mostly saturated fats, to be sure, but a recent publication more than just suggests continuing to consume that, if you have health issues regarding arteries or other such, to deal with it is to cut high glycemic indexed carbs (white bread, I go with mixed grains, including some white but just 'cause, my arteries are clean as a whistle and health numbers are excellent).

As for shopping? I have fixed that. I only buy for three people. When they get what they get depends on when they decide then let me know what they want. Oh, sure, there is the ol' guess, hunt, and peck. But I don't play that game at all anymore. If they refuse to say, they get a card and a check. And Christmas can come late, from me. Even two months late. Shouldn't every day be Christmas? (I have heard.) I just take that and... stretch the meaning a bit. :p

I won't do organic unless there is no other choice. $$$ and no extra real quality. My last lady required organic, but unless she shopped it, she got what she got. Fresh first, then organic if unavailable otherwise, then hot dogs. Not bad, that last, if you burn them beyond recognition. I am decidedly not high maintenance.

A genuine neighborhood butcher shop? How cool is that!
That pesto sounds just dandy. Do they also sell chocolaty things?

I skim it off the top of whatever I am cooking and toss it in the trash can.

Now jerked steak.
I could go for that.

The folks at Amazon are helping me to reach that Dec. 15 goal.

Oh, be still my heart; everything tastes better cooked in duck fat!

The best deli/butcher shops in the greater ABQ metro area are owned by Italian families. In fact, there are more Italians here than any other city in the Sunbelt—the first wave helped found the city, the second came in the 1970s, lured by cheap land prices and a geography that reminded them of their homeland. So we're lucky in that regard.

With the exception of the three gifts I order online through Harry and David and the other one I am stalking on eBay for S.B., I am DONE with my Christmas shopping. And, boy, does it feel good.

So, did you head back out after you were fortified by that pesto? YUM!

Howdy,,,would ya' believe that when I gits SERIOUS, I still use lard in a pie dough? But--mah lipid numbers is all good so I ain't overly worriet.

I hear ya' on that shoppin' lament--nobody likes guessin' an gettin' it wrong. Can I jes say, a few times I'se muffed it wif' Uncle's B'day--now, I jes' ask him to give me a short list an the surprise is which item on the short list he gits.

Ahaha--well shure they do. I'se no expert, but doan Orthodox Jews use chicken fat (whar' we might use bacon drippin's)? Duck fat is key to certain French dishes.

As fer shoppin'? Youse a sly fella--well done! Amazon is mah new best friend too. But....I'se really really tryin' to go more wif' handmade an' local stuff. However, them that lives far flung from Aunty gits deliveries from amazon--they have no shippin' charges on me (cause I buys too many books all year long--
bookaholic's confession).

Moi!
Cherie, I envy ya! that shoppin' chore is done????? The hounds is still on mah trail--but I WILL finish this comin' week.

No, akshully, not been back out--but thar's a few thangs I cain't git delivered. Would'ja think that any folks would have a wish list that includes a certain type of steppin' stones??? I has to git mahself up to another city--hour's drive--to fetch back some stones from someplace named Pebble Junction.

Oh, Aunty, duck fat fries – or any kind of potatoes cooked with duck fat – are a real treat! Duck fat is classically used in cassoulet, I believe, and would be delectable when roasting vegetables. It’s also used in making confits (with a little googling, I just came across a mention of shallot confit on Serious Eats, make by slowly cooking shallots in duck fat, then after they’re caramelized, adding a touch of honey, some truffle, and a flambé of cognac (swoon). With a little research, I’ll bet you could find all sorts of dishes that would appeal to your Francophile heart. The new French store in Cincy carries duck fat, and I’ve been wanting to try my hand at cooking with it too. Perhaps there is a Battle Duck Fat in the future of the Culinary Smackdown?

The Meat House is one of those places that would make me lose all restraint. How the heck does Edmond, Oklahoma have one and there isn’t one within hundreds of miles of me?

Have one gift left. A bread machine for Mrs. K. I sure could use some help on what brand is best. Any recomendations?

@Karl - sorry, but I don't believe ANY bread machine is worth the time it "saves" in making bread by hand. (my Father won blue ribbons for his bread and I was raised with fresh bread every weekend.)

A local stand alone butcher opened in our neighborhood last Summer. I hope it's able to stay open. They provide what grocery stores can't and I applaud that. Even though I'm a vegetarian I eat fish and will NEVER buy fish at the grocery store.. I'm lucky to be able to go the docks and buy from pretty much directly from the fishermen.

I hope you're having a good weekend.

All I have left to do is put up the tree.
Everything else is done.

@Karl: I agree about the bread machine. None of them I've ever used or heard of being used made all that good bread. Why not a set of French bread pans or proofing baskets, instead?

Better yet, a Cuisinart stand mixer with a dough hook. That's how I've made all my bread for years. It can either do all the kneading for you, or just the mixing. Fabulous product.

The post is fabulous in content and the comments are educational! Who knew I'd learn so much about duck fat and all of you by the comments? Boxer gets fresh bread every weekend cuz daddy was an excellent baker? Eggy's research on duck fat (I still say Eggy would have made a great lawyer or detective!) Italians in Moi's neck of the woods, sticking to tradition as old school purveyors?! What a font of info!

That store looks absolutely DIVINE! I cooked with duck fat that I rendered myself once (when I made the smoky duck tortilla soup and won a smackdown!) but if I had access to it, you bet I'd find ways to use it! That store is a coup! And pesto made with creamy cashews and artichokes? hmmmm....trying to imagine the taste of that and how I can make it myself! I am lucky to have access to one of Miami Beach's oldest gourmet shops, Epicure. (I'm sure they sell duck fat there!) and just Wednesday, MB was graced with the opening of a Fresh Market! So, within a few blocks, I have Epicure, Fresh Market, Whole Foods and Publix! I'd be surprised if I needed something and couldn't find it at one of them!

As for Christmas, the actual present buying and tree decorating has been sporadic....when one goes from an executive salary to starting their own business, the purse gets a little tight and we have no kids so, it's not a big deal (birthdays ARE a big deal though!) I've still yet to put up our tree, we've both been so busy as this is a huge time of year for events, so hubby and I are run off our feet. Looking at next week's schedule, don't think it will settle down until the week before Christmas! Off to Art Basel's last day of viewing FABULOUS ART before it goes away for another year (I've been working and couldn't go until today!)

Where is Buzz? He would know on bread machines.

I'm with Eggy on taters fried in duck fat. I'm shocked Uncle wasn't already aware of the great flavor and texture duck-fat imparts. And that he hasn't supplied you with fresh duck fat previously.

What does he do with the ducks he shoots?

not even close on gifts. as usual. I wont get started until this weekend. Its like this every year. Duck fat. doan know.

Oh, now you are making my mouth water. Access to that many fine fooderies? Why, seriously, I would be in heaven. As is I have to drive two hours and dodge traffic and the unGodly for a Whole Foods store. Good luck with the artichoke and creamy cashew pesto. I somehow just know you will make it yourself. Food is divine, divine food is a whole new category.

I might be a fighter type, right down to my atoms, by make if not model. But I love me some fine vitals. Nothing beats cooking them at home.