Paris warn't cold, merely misty-- the sun lacked enough muscle to push aside the clouds-- leaves were fallin', their constellations coppery-gold against an asphalt sky... 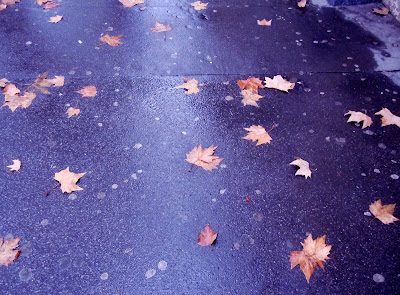 an' t'were easy to wander fer blocks an' blocks, peering in the windows. 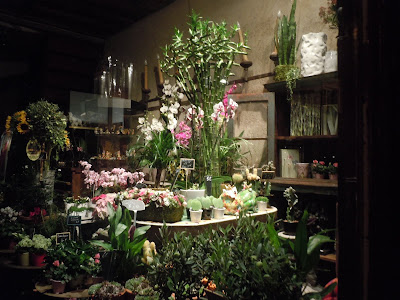 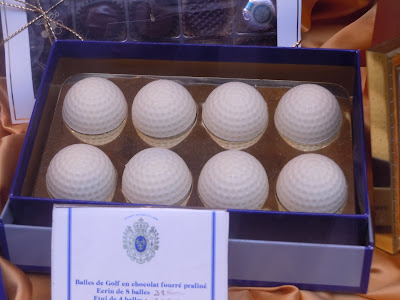 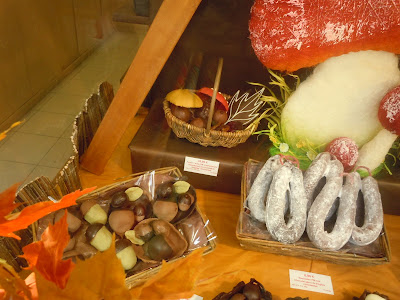 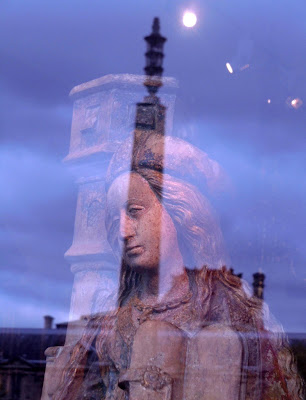 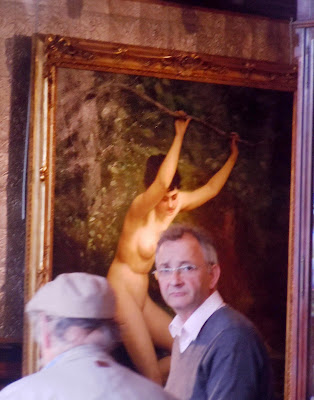 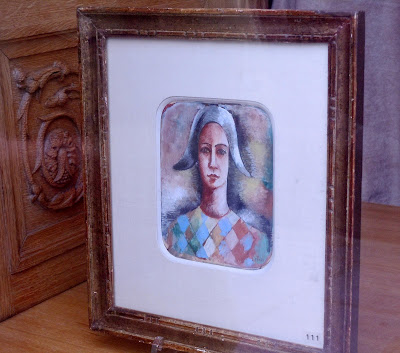 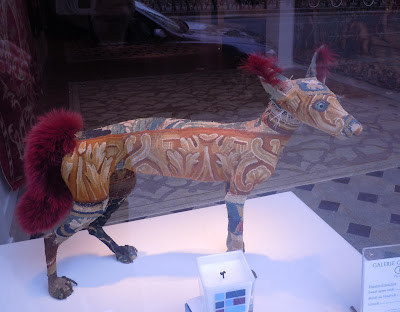 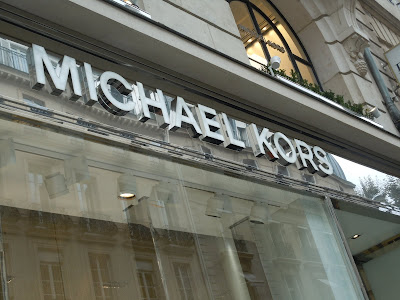 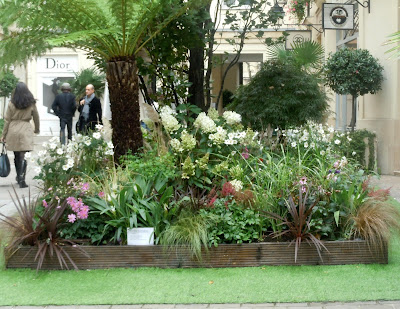 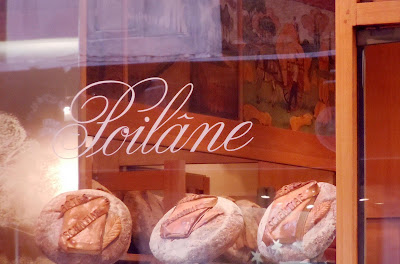 The Shrine of Bread! 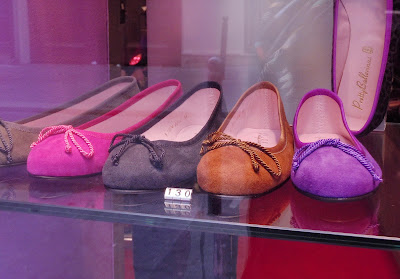 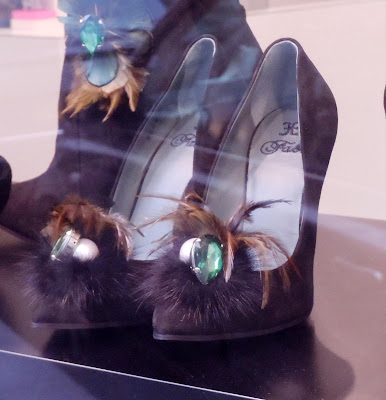 A study in contrasts-- The Ballet Flat an' the Stiletto, de rigueur in every French Femme arsenal--er, closet. 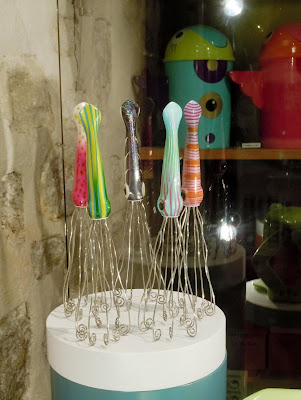 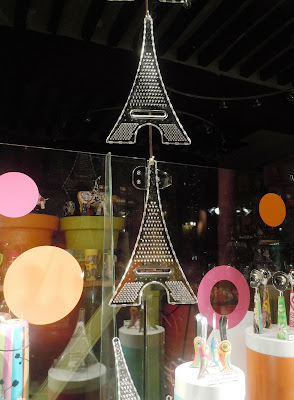 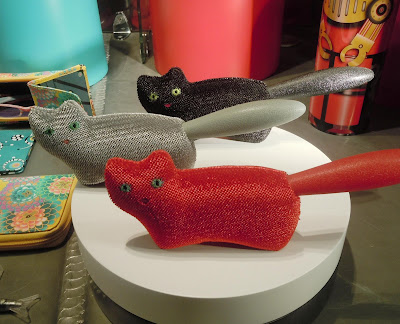 If groceries are this beautiful are ya happy wif' less? Or do ya reckon the temptation is to spend more on vittles? Aunty be charmed that small grocers treated their shelves like canvases. 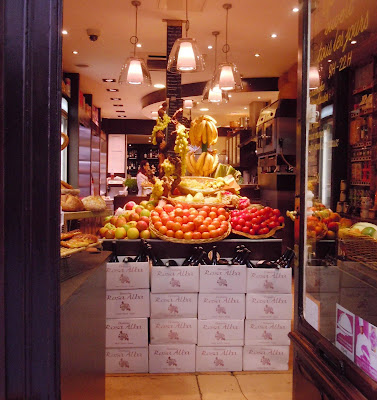 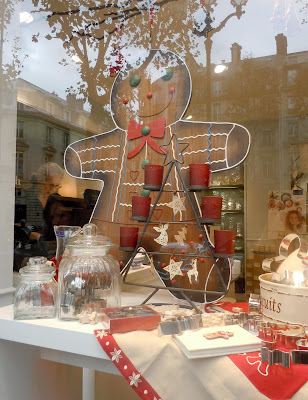 
Paris themed blogs I visited before mah trip include:

What fabulous photos, Aunty! I do so love stopping by here for some armchair travel :)

The French are definitely to be admired for their skill at making everything "just so." Not a bad way to live, taking an artistic approach to life's everyday tasks.

Bravo on a fun filled tour of your Paris!! Carla

Wanted to stop back by and let you know, Aunty, that my Scout has miraculously returned! Thanks to you for your prayers to whichever patron saint is supposed to be in charge of getting lost kitties on walkabout back home safe and sound :)

An' wow!! Scout is HOME!! Yipppeeeee. Yep, St. Francis of Assisi--Patron of animals.

Moi,
an artistic approach to everyday (thas' real life, huh?) is an art-an the French have it DOWN. doan they?

The ballet flats look a lot better than the shoes with the Tarantula on the toe.

I can see why the gnashing of teeth about that photo card. Would have been a desperate shame not to have been able to rescue these!

Wow, such gorgeous photos for a Sunday morn! I love the French aesthetic, beauty surrounds and abounds! Fancy choos! A plush foxy! Flowers, pain au fabulous and sassy kitchen tools! A Diva is in heaven! Thanks for posting, aunty!

heh--funny...an mah poor ole back will thank a gentlemen that can be happy his lady ain't in spikes on them Paris cobblestones.

hi thar'--happy to see ya heah--yep. t'would be a shame to lose them photos--memories of the thangs nobody put on the postcards.

La Diva--jes' fer the markets the trip were such fun-- them choos--whoo -wheee, lemme say, even the Italians cain't out shoe the French.

grherhahaha the man with the nude!! nice catch aunty. Im furious though. you didnt bring me a squid whisk. man, I really really like that. the mushrooms are great and i like the dog or is it a fox figure. so many wonderful things. did you do your xmas shopping there?

24.99 on Amazon!! Im getting the white one with the sea green accents. i am. tomorrow.

Hey--come wif' me next trip, an' we'll scope out all the fun stuff.

Yep, Man with Nude...ahahaha It's the same the world over.

Oh, an' Pup--who'd have thunk it? But...I seen a handbag NOT at Hermes--but tres British--le sigh, "Eeet eese too hard" for mah budget.

Mulberry makes byooooootiful bags! As does Tods. But what I really crave are a pair of their snakeskin or suede driving mocs: http://tods.com/#/it/collections/women/shoes

P.S. Did you see Christine Lagarde, head of the IMF, on 60 Minutes the other night? She is tres chic. However, I wonder what the world thinks of taking budget-sticking advice from a woman who carries around a $20,000 Hermes Birkin?

Them Mulberry folks got 'em a winner--the Bayswater is the sane woman's answer to the Birkin.

OK, true confessions--Aunty do have a couple of pairs of TODs in the closet--mocs, not the Stivaletto! BUT but but...they's old--I'se had them refurbished! They does a yeoman's duty marchin'
through airports, that is, they's earned their price. Le sigh, now...mah budget be strained.

We COULD be generous an' surmise the woman belongs to one of them designer borrow clubs--ya know, whar they pay a fee to "borrow" the bag (jewels, fur) then return it to get the hold lifted of the plastic.

But, youse a smart cookie, an ya KNOW that La Garde is one of them socialist elites that thinks they know what the rest of us worms should pay, while they revel in all the goodies of capitalism
--name me one upper echelon socialist who lives the same as the peons they claim to serve--'member how she told Americans at Jackson Hole confab that we had beeter capitalize the Euro banks--or else? Yep, peon Americans better pony up the Greek bailout, the Portuguese bailout, the Italian bailout...

La Garde as IMF chair- of course!--is the creation of Rahm-Bo. Doan fergit, she worked as chairwoman of the same Chicago law firm as the Obamafiosos. Even Putin said early on that Stauss-Khan wuz set up by the global bankin' cabal.

This woman, as Minsiter of Finance fer France, awarded 400 million to Bernard Tapie, a Sarkozy donor. Ain't that cozy?

But she do look swank in her Chanel suits an' Birkin bag.

Aunty! Great pics. You had a whole different point of view on your trip to Paris than we did. If it was touristy, we walked there and took a photo. Didn't do the shop windows, but did do a few cafes. And no, didn't go in any of the designer stores either, nor would I. That's not in my budget either, but hey I can critique along with the rest. Sigh. Now I want to go back!

Oh, yes, Aunty, she's a piece of work, alright. I give her props for her fashion sense, not her political one :o)