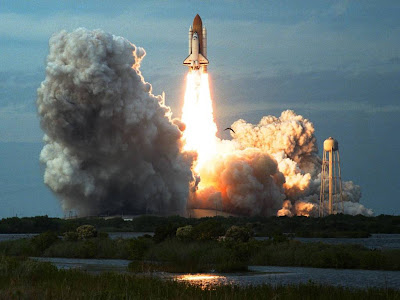 Iffin' I stand on mah own patch of earth an' gaze east, on a clear day I can see the shuttle soar, separate an' whiz out into space.

Me an Uncle always do this--it never gits old, but now, it will be last.

They say it's about the budget, or the over-bloated NASA program, new directions or whatever.

Will outer space will be left now to the Russians an' the Chinese? Beyond the loss to our national identity as explorers/ pioneers, beyond our loss of jobs an' the technology that is derived from what we study in space, I is worriet fer our security.

Some years ago I read a report that claimed the Russians could microwave a single goat on hill in Switzerland-- from a satellite. An' mebbe thas' so...an' mebbe we can too. So....jes' wonderin' iffin' that do be so, doan we need to be above any satellites? ya know...jes' to hep them satellites an' their owners to play nicey nicey? Mebbe we have other methods? I wuz a fan of SDI.

I can see it from Troll County too. And I've been close enough to feel the wave many times.

I think what the Obamanation is doing with Nasa is a complete travesty.

And, of course, it's an indisputable fact that it badly harms the State of Florida.

Alas, I watched online and was late for date with my visiting son-in-law.
However, he was watching at his mom's house, so I was forgiven.

Started watching launches as a kid, my folks would let us be late for school watching Mercury, Gemini, Apollo, etc on tv in northern NY.
Sad to see that chapter close.

If for only this reason we need to keep our space program alive...So that we can send our politicians to Mars for the mess they've made of things. (Or back to Mars, if that's where they're really from.)

There is nothing quite like the power and the exhilaration one feels when the shuttle launches. Propelling millions of pounds into space requires a lot of horsepower. The shuttle served its mission well, yet at roughly $9000 per pound. It's an expensive heavy lift platform. The Orion project could have covered both heavy lift and manned spaceflight had it not been cut. A very shortsighted decision.

Yes it is a miscalculation. The loss of engineering talent resulting from shutting this program down will cost this country a lot. These innovators, these advanced thinkers, have propelled not only the shuttle program, but the deep space programs as well. These engineers are leaving looking for work. They won't come back to the industry that has forsaken them.

The Chinese interests in space has little to do with science. And the Russians are using it for pocket change.

We do need to control the national debt. Giving up our scientific superiority is not a way to do it.

I'll get by the back porch soon, I've just been pressed for time.

I too posted on this event , just pictures no commentary. Not like me to hold my tongue but I am distressed by the absolute absurdity of the gutting of NASA.

I do believe we have achieved amazing things in technology and medicine with our space program as the catalyst. There was a time when I would have believed in American leadership, trusting we would never give this up unless there was something better in the wings. Sadly, this is no longer true for me. Now I believe we are forfeiting much for questionable motives. I loathe also, the loss of America's desire to " be the best". It seems to me what is promoted now is low grade mediocrity.

It is true the shuttles are past their prime, hard to keep in good repair and, nearly impossible to upgrade. A LOT of technology has happened in 30 years! Phasing out this space shuttle program is, perhaps, understandable. To gut the funding for what comes next?
Seems risky, short sighted and irresponsible to me.

My understanding of SDI is that it does not use the space station or astronauts. The technology used does not get repaired in space, it gets jettisoned and replaced as new technologies come on board.

Let us hope the chat about contracts for space "planes", as opposed to orbiters is in fact true. I have read before the intent to weaponize space has moved the programs from NASA to DARPA for security reasons. Maybe the rumors about space drones are true and our new astronauts are in the pilot seats in Houston or Huntsville of Titusville, flying virtual missions.

Lets also hope they are ready to
retrain and hire the thousands of NASA employees soon to be unemployed.

Aunty, if there is about to an opportunity to buy waterfront real estate on the space coast for cheap, give us a heads up will you? Maybe we can all throw in and have a bloggers beach house.

Grr! jes' wrote a long response to one an all an blogger ate it--WHAT is goin' on?

Everybody made good points--we need scientific challenges and achievements or we will lose ground, become a rust belt nation.

I wish y'all could see what I wrote afore blogger ate it--drat!

on a could winter day in '86 I wuz drivin' behind a school bus that were on a field trip--all of a sudden the chillen is crammed in the back window of the bus pointin' up, an screamin' an I could see faces buried in hands. Then traffic stopped, folks out on the street point up--an' I too opend mah door looked up--an Challenger was fallin' from the sky. The horror is inexpressible.

That America went on, persevered...whar' today is that America?

Aint B, don't you know that if we lay down all our weapons, all our enemies will lay down theirs? (Wanna buy some oceanfront property in Arizona?)