A child in Virgina died of E. Coli this weekend and two others are hospitalized in Tennessee. Researchers are culturing the E.coli to see if it is the same strain of the bug as in Germany.


Update: some have finally asked the big question--can this E. coli outbreak be an incidence of bio terrorism? Now the the German scientists say it ain't the Spanish cukes, ain't the bean sprouts, an' they now wonder whar' the stuff came from, nature or terrorism?

After all, E. coli has been identified by government officials and scientists as a potential bioterrorism agent.

Bioterrorism is defined by the Centers for Disease Control (CDC) as the intentional use of bacteria, viruses or natural toxins as a weapon to kill, injure or produce disease in people, animals or plants. Terrorists may use this kind of attack to create fear, disrupt the economy, or to get a response from the government.

... there are a couple of things that are unique about this particular strain, compared to E. coli we’ve seen in the past...“This strain (0104:H4) is a hyper-toxin producer, which means it produces more toxins than the usual strain, and causes hemolytic uremic syndrome (a complication of an E. coli infection that can lead to kidney failure) at approximately double the rate of the E. coli 0157:H7 strain...In his 42 years at the department of microbiology at NYU School of Medicine, Tierno said he has never seen the 0104:H4 strain – not once – ever. 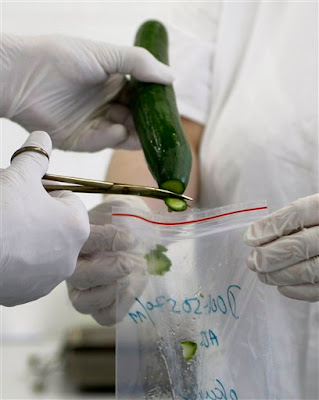 A'fore ya gag up yore breakfast, it ain't allowed in the USA and the the Euros outlawed it last year, but the Aussies is eatin' it regular-like.

If that ain't enough to gag a maggot, what about the new strain of E. Coli thas' kilt 18 folks in Germany and sickened 1700 more? The Germans blamed it on Spanish cucumbers, but now the Swiss and French and Italian and German labs say, "NO, it ain't in the cukes." Even Germany's Merkel has apologized an' agreed that the EU will have to reimburse the zillions this has cost Spanish agri-bidness in dumped produce.

The plague broke loose in Hamburg, at a festival whar' a million folks had to be fed--no Spanish or French or Italians is sick from eatin' the Spanish produce. Seems then the problem is generated somehwar's else--like in Germany itself, mebbe? yeah, in their own sprouts. Hmmn....the secret horror is that this is a strain of E. coli that ain't really known much--and though some news report that it is a "mutant" strain the US researchers say it ain't--and the Italians say it ain't--they say it is the dreadful E. coli 157 , but that monster somehow has picked up a new gene that makes it super-virulent--and of course, highly resistant to antibiotics. 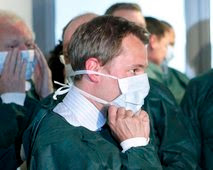 "One of our partner institutes examined the bacteria,” said Gregory Hartl, a WHO spokesman, by telephone today. “It’s one that’s never been seen before in an outbreak situation.” European authorities are searching for the source of the bacteria, which appear to be more virulent than previous E. coli outbreaks. Tests conducted on samples showed that cucumbers imported from Spain aren’t responsible for the outbreak...."

Oh, it's so good to know WHO is on the job. "The crisis is the deadliest E. coli outbreak in modern history." The German hospitals are overwhelmed and the sanitary conditions are "horrendous" according to AP.

Jes' to keep the fun goin', turns out that E. coli is one of the easiest bacterias to play wif' in a lab. Industrial microbiology can jigger the DNA on it an' create the specifics needed fer various laboratory experiments. Ain't that cute? Gits ya feelin' all warm an' fuzzy right? An' guess whar' they do a lot of that industrial microbiology? Yep, ya' got it.

Vladimir Putin done said "Ain't no Euro produce comin' in Russia'" so the trade wars are on....

How many of us'uns is already food wary? How many is already thinkin' of how to source better vittles?

Iffin' any of ya' has a trusted source fer grass fed beef, I'se interested.

I can help you with that sourcing.
Come on up here and I'll show ya the food farmin folks in these carolinas is all about keeping the food local and good fer ya.

Just waiting for our local farmer's market to get going for the season here in the Black Hills!

i read that bean sprouts might be the cause ...
i really haven't eaten sprouts in years although i do like them.
it sure is discouraging.

funny haiku, huh?
hmmmm...
my mind is already in the gutter.
i'll try to contain myself though.

All it would take is a concealed spray bottle and some poopy water to create fresh produce/salad bar panic in the US.

Such a simple way to disrupt normal life and create fear, which is a major goal of the terrorist.

You could even use twitter to make sure it happened around the country on the same day.

Foamy,
It wasn't the sprouts. The entire thought is horrifying--see FC comment.

FC,
gick! Youse scarin' the tar outa me. But I know youse right. Think of the number of restaurant/ grocery personnel who could take out a city in a week. I am writing that novel this weekend.

Remember the Tylenol contamination that led to all packaging of OTC meds being sealed like Fort Knox? Soon our groceries will all sell hermetically sealed packages of lettuce. Still, if the plastic clam shell packages were sprayed with E coli water, then the shopper who picks it up and takes it home has the bug on their own hands--it isn't jes' food that is subject to contamination.

Say, FC, ya got a guest cottage in yore woods? I'se about ready to move out of the suburbs.

No one can pinpoint exactly where this came from because the cause could be so many things. So blaming organic farming methods for this is like blaming mother nature for the weather. But I can see how it WOULD be very convenient, this blame, for big agri-business.

My source on occasion for grass fed beef: moonbeamranch.com

Not the sprouts, now--some think genetically modified corn fed to cows allowed the E.coli that lives in their gut to "acquire" another gene. The cow manure is used as "slurries" --an organic fertilizer that is not made of chemicals.

brilliant undercover way to get rid of some useless eaters. there are a million ways a situation like this could be used/exploited to accomplish all kinds of goals. for governments, for businesses. I remember reading a story about organic being more likely source for e coli because of the manure - even when the lettuce says triple washed - i still wash it.

Its kind of an interesting situation we find ourselves in: "terror" from every sector of life. makes controlling everything more likely.

one thing is for sure -this aint no Al Qeada MO - know what i mean?

I am very pro-organic, but I also respect scientific studies and studies have shown that some of our crops can take in pathogens from manure.
Take them in as IN THE PRODUCT.
Not a surface contamination, but systemic.

You can't rinse that off.

My wife works in public health and gets those alerts from the CDC from time to time.

There is no risk free method of food production.
We just have to keep refining our techniques to get the best balance for health AND a healthy ecosystem.

I'll get to work on that guest house, Aunty.

I have to say, I thought the same thing when I read the news story. It's frightening. BUT, after learning my Whole Foods buys much of the produce I buy in MEXICO I am more resolved to only buy from local farmers. And, as Chickory does, I wash/wash/wash. And if I could boil and/or microwave I would do that too. I have a very heatlhy fear for germs. Too bad bleach can't be sprayed on food. I'd do it. As for those poor people; they are in my prayers.