When ya' see ole homesteads like this heah, does ya' spin a story in yore haid about who must lived thar,' an' how they made they livin'? Who they loved, lost, or fought? I passed this beauty, an' afore I rode on another 5 miles I done writ a whole novel around this speck of history. 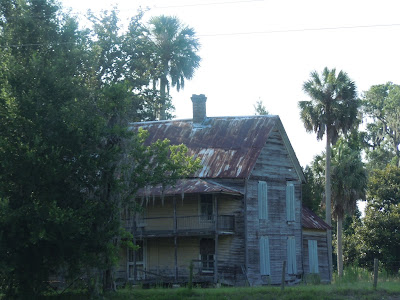 Inspired by Chicory's recent post with the marvelous photos of Florida by Clyde Butcher, I took mah camera along t'other day, when, once again, mah obsessive wanderlust demanded some attention. I'se doin' a bit of professional yakkity -yak in Florida city I doan frequent, an' I knowed I could take some interestin' back roads home. So I tossed the (awful!) new camera in the back seat fer the ride. 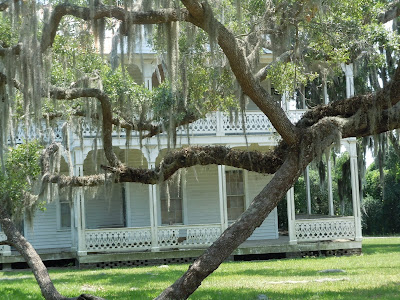 This ole' Victorian is fer sale--oh please! May it be sold to the soul wif' a heart fer restoration.


Wanderlust is part of mah DNA from Pappy Cracker.

When we wuz young'uns, up in Hawg Town Creek, Pappy took us each, one by one, "on the road" wif' him one week out of each year jes' to provide us chillen's wif some specialized daddy time. This were a rarefied looky-see into that mysterious world of grown-ups and bidness. We had to dress up, mind our manners, an' know when to keep quiet. We always seen a side of Pappy Cracker we din't never see at home--prized time indeed.

Now, this were afore the I-75 were completed so often as not, to git whar' we's goin', we took some back roads. Mayhap' thas whar' Aunty's penchant fer the road less traveled began. Ya' reckon? 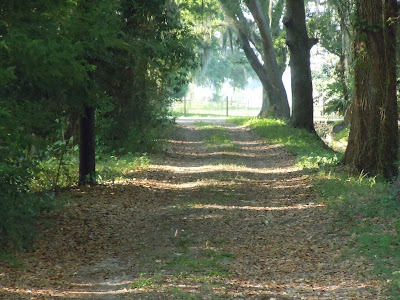 Anyhoo--despite this frustrating camera, I offer y'all these scenes of lost Florida--somethin' the tourists never see. I know it is selfish of me, but I pray somehow "progress" will whiz right on by, leavin' these ole' country roads to us Crackers. 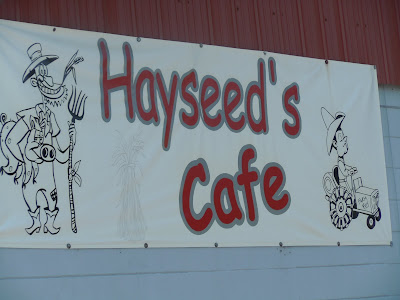 Hayseed's is guarded by this handsome yard art sentinel ( note to Chickory--ya needs one of these!) 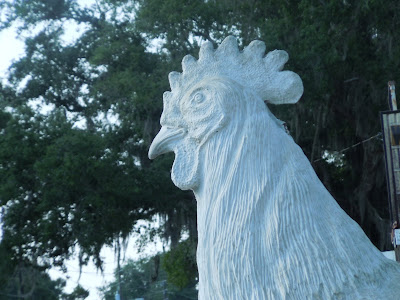 A few blocks away from Hayseed's, this live bird scared the feathers offa me when he/ she shrieked. 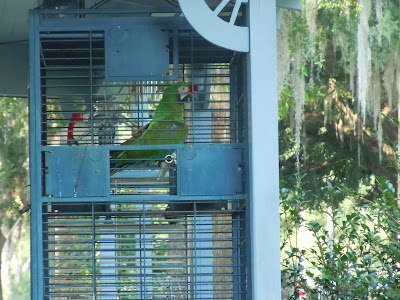 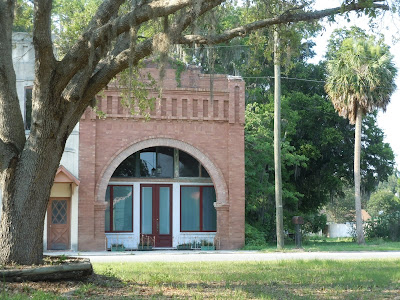 Turn of the century architecture what ain't been victim of a wreckin' ball is rare. This village's library boasts a Civil War archive, so I reckon I'll be back to visit an' bring along some of mah own Civil War archives to share. 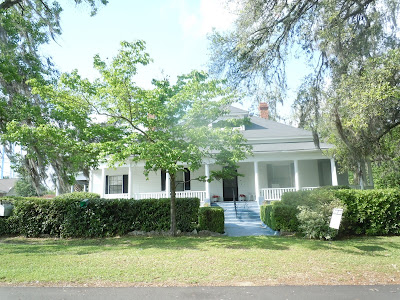 This beauty is fer sale in a quaint hamlet--sigh, I is tempted. 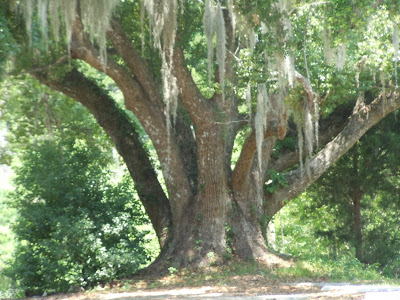 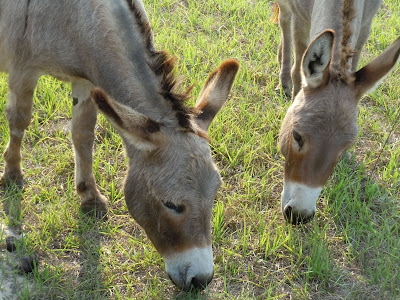 Not much call fer a lawn mower iffin' ya do thangs right. 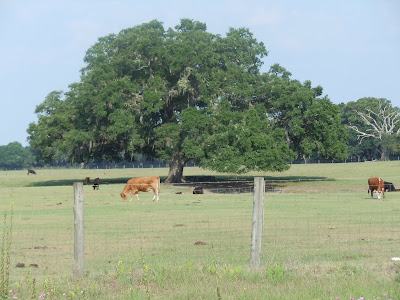 Few folks realize that cattle ranchin' is big bidness in Florida--over a million head of cattle --no wonder long views over ranch land dotted wif' live oaks is dear to the heart of Floridians. 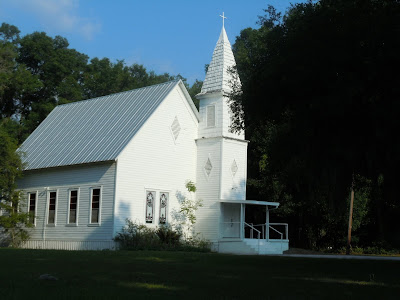 Even those of agnostic bent is touched by ole' time clapboard churches in the woods. 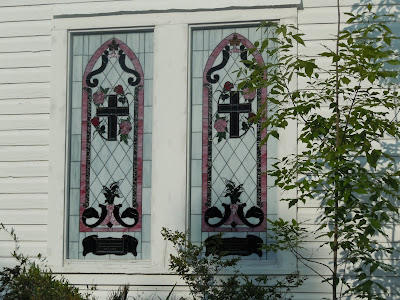 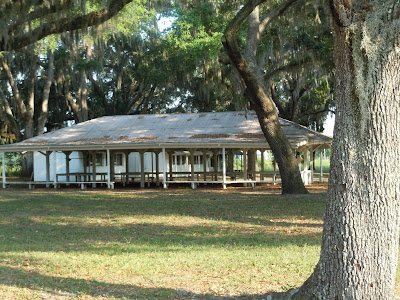 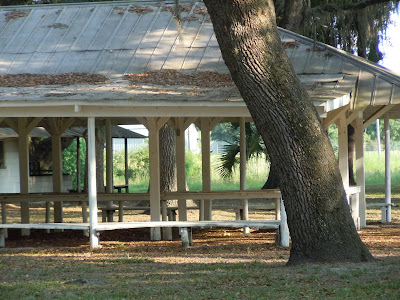 Head down a county road that ain't seen no stimulus money since it were built an' youse most likely gonna see the lairs of honest to goodness Dukes of Hazard cuzins. 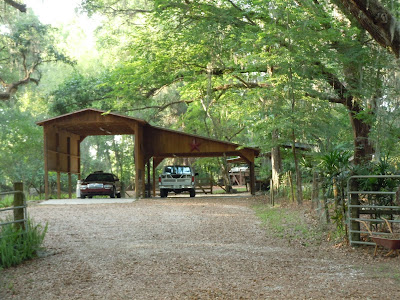 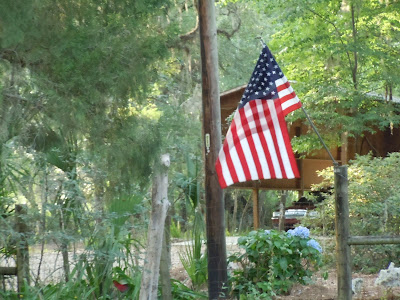 Back along these windin' roads, I seen plenty of patriotism. 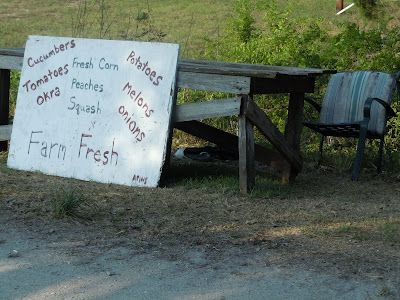 Seen a goodly number of roadside stands...an' I wonder, how long could ya go wif'out steppin' into a grocery store? 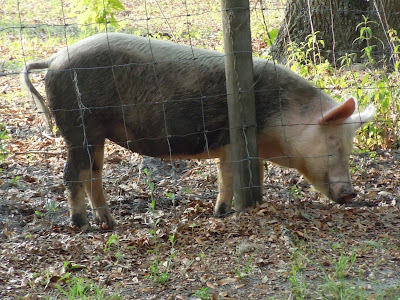 Plenty of pork rinds in this fella, heh. 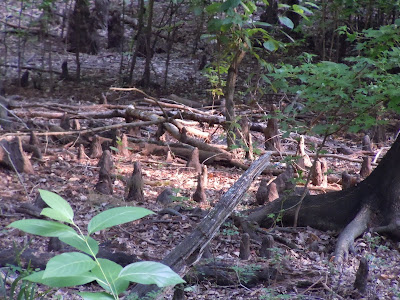 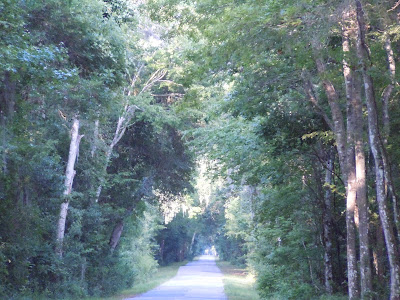 if the vegetation were different, the land less flat it could be nwnc ..
sort of.

thanks for taking us on a ride! i love your photos.

Aunty,
You and I could travel together jes fine. I love ol architecture, can write a novelette in my head from seeing drippy moss and a fine ol cupola. These pics are so endearing, I love the church windows, the shade of blue in the hydrangeas you only see in Florida and the live oaks. sigh. Hope your yakity yak was as entertaining as this photo essay. I reckon I don't have a doubt on that point.

@ Foamy,
Or here in the Upstate. I think you might be close enough to meet for a picnic lunch on a lane alongside the Pacolet.

Auntie, I adore this post and maybe you and I could get into a bidding war on that cute little white house. I think the other one is a tad big for my purposes, but that one is a-dorable. But, do tell us more about the professional yakkity yak sometime!

That was a nice ride, thanks for taking us along.

You frustrated camera users need to talk Pam into teaching a class.

Less flat...funny, but very often if a visitor comes, I fetches 'em from the airport, an' the first thang they note is "wow, it is really flat here."

Akshully out whar I wuz and then on up northwards thar's a decent roll to the land. North Florida can have a skateboarder's dream of a hill. But headed south of Orlando--onliest hill youse gonna see is a landfill.

Fishy!
I reckon youse right! Come on down heah, take the ride wif' me an let's write us a blockbuster. I need the $$. I'se tryin' to git mahself to France in September.

Somewhar' somebody *musta* a done a picture book on ole' Florida, I'll ck Rizzoli --but if not, we could make a project of it. Besides, wouln't ya love to git yore hands on that Carpenter's Gothic an spin it in yore own brand of TLC?

Lady,youse alive!!! What in tarnation is afoot in the middle of America?? You'd have better weather in OZ. Seriously, I am heartbroke for all them folks who is left dealin' wif such devastation. And infinitely grateful yore folks ain't missin'.

Ain't that a darlin' house? Wif' both an open an' a screen porch--gotta have porches!! Lemme tell ya, the lawns adn shrubs were tidy, the place fresh painted--mah goodness it is a temptin' idea.

As fer the yakkin' even I is surprised that folks will invite ya' in an pay ya' to tell 'em what time it is. Heh. ( I write on certain issues--that may prompt an invite to speak. VERY small potatoes, I assure ya'.)

Thanky--so glad ya' came along. Thar's a lot of history in an afternoon's buggy ride. As fer PamOKC teachin' a class--I'se the first in line to sigh up--inspired idea! Akshully, wouldn't it be fun to have a blogger summit? Big time? Everbody includin' spouses and kith an' kin'!!

You certainly get around town. Your 3rd picture reminded me of this.

@ Buzz Kill: You may want to check the source for that link. There is something in it that my firewall doesn't like.

Damn that company firewall. I'm able to see that link too. I'll just put the address in but it's probably lost it's funny now.

There is a house on the Island that pass on the way to my brother's; old and falling down and I wonder the same thing; who built it? Who lived there?

I love these pictures, especially that big beautiful tree. Wow.

I love those backroad days.
Thanks.
... um, was that Citra?

Wow, BuzzK--thas' real impressive that ya can remember scenes so well an' match 'em to a blog picture--real impressive. Now...ever road like that will have be wonderin' if a box of chocolates is waitin' t the end. Wow.


"if the walls could talk" huh? all them ole homes must have stories. Thar's a "novel" point of view--from the perspective of the house--let the house tell the story. Know you must treasure yore island as at least safe from shopping malls.

I hoped you'd stop by the Porch to see these pictures--this be further south than Citra--though now that I think of it, very similar feel. I wuz up thataway a few weeks ago, an it is so purty! I went to O'Brisky's books in Micanopy then down a'tween Lochloosa and Orange lake to 301 south through Citra.

But this time, I wandered up from the southern edge of the Withlacoochee SF, cut over at Floral City to Bushnell, then down 471 through Webster(Whar' Hayseeds Cafe be) Found a cart path road to Linden, crossed 50 to another CR (772?)running parallel to 50 on it's south side--whar' I seen them cypress knees--until about Mascotte. As Granny would say, "it were the back of beyond"

Lovely tour, thanks for taking us along. So many wonderful places to see in this country, it's a wonder anyone travels overseas . . .

Another vote for a Pam-led camera lesson blog summit.

Oh, that was a fun ride Aunty! thanks for sharing!

well you know I loved this tour. I will take that white house in a second. I can smell the rich hummus of the earth in each of those photos. this is the florida i adore. Just a delightful post aunty. I loved the old pavillion and wood pole arns. damn cant tupe i hurt my hand later aunty

Thanks for those sailing coordinates. I will try that sometime. I think I have done bits of that route.

Moi, youse the organizer par excellence--PUHleeeeze git PamOKC to do us a seminar on How To Handle Yore New Camera A'fore Ya Throw It Through The Window of The Camera Store.

Chick9,
now ya know I had ya in mind when I started off on them backroads--I kept wonderin' what music youse gonna play had ya been along fer that ride. Heh. An I DID smell that loamy earthy elixir of rich soil.

Listen, ya' tempter of fates--I'se so happy to see ya heah 'cause it means that gator ain't et ya' up--yet. (folks--go look at FC's post--it will give ya the willies)

As fer the sailin' coordinates--meant to say I went SOUTH from Bushnell to Webster--in case ya ain't privy to mah logic that goin' "down the road" is south, an "up the road" is nawth.
Please share yore photos wif us iffin' ya go--an' mebbe do more in the Withlacoochee--I need to go look at it mahself a little more.