How to Git Rich Kwik

We gits so many scam offers per day that the national forests is in dire peril.

We prolly receive two "Unclaimed Sweepstakes Winnings!" letters per week. They doan even make it into the house. Other advertisements is obvious frauds.

Onc't in awhile a hum-dinger arrives such that we holler "There oughta be a law against this!" 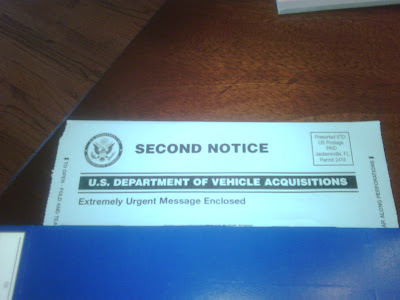 We knowed right off this warn't a real thang, but wondered who done it.

A local car dealership. They better fire their Ad agency today. All this advertisement done is to make us say "we ain't never gonna git no buggy from them folks."


It ain't clever, it's fraudulent:

It ain't from the gubmint
It ain't the "second notice."
It ain't "extremely urgent"


Doan know about yore bidness, but in ours thar's so many rules and regs, a body cain't hardly keep thangs movin' along. Meanwhile advertisin' abuse like this flourish.

In the NEW AMERICA the fastest way to success is a successful scam. We's rewardin' scammers by lettin' 'em hide behind "free speech" laws. But jes' try to advertise somethin' real an worthwhile, like organic food or vitamins an' watch the goons come up to yore bidness door.
Posted by Aunty Belle at 2:11 PM

trickle down from the top.

I get so fed up with these things. Plus the key they send you in the mail that will open the door of the free car if you are the winner. We've been getting robocalls since Monday down at the office, boy could I tell you some stories about that. Political calls preying on the elderly ... getting them to push "1" to speak to their elected official to tell them *no more bail-outs* ... when really it is for something else entirely. There oughta be a law. Wait a minute, surely we can arrange that.

Just yesterday my office Fax machine received a Fax asking us to send them all of our unwanted Faxes and they would ensure that we are taken off the lists. And they would do this kind service for free. In actuality, they were just verifying that our Fax number was still good so they could sell it to other companies. I wonder how many people bit on that scam.

With all the other crap going on in the world, we now have to be careful of 2-bit thieves like these. My head hurts - a lot.

If you're going to compile a Top-Ten list of sleazy/obnoxious/relentless scam markerters, I suggest you include AARP.

Auntie, what can we do to stop the junk mail? It's the waste of paper that kills me. You know in Australia, paper goods are sooo expensive, they value their trees! Why don't we? Why should I have to go through the bother and inconvenience of recycling and shredding when I never asked for it in the first place? I know I read there are companies that remove your names from their lists but whom do you trust? And even the credit card companies I have accounts with send unnecessary mail.

Don't get me started!! I have a shredder at my house and the thing that makes me the maddest is that I didn't buy a big enough one. Does that even make sense? Well you get the picture.

Another thing that chaps my ass: those relentless email scams from some pretend exiled prince from some bumblefork African nation asking for financial assistance with the promise of big bucks rewards. This has been going on for years, everyone knows it's a scam, and yet these forkers persist! Makes me nuts. I forward everything on to our Attorney General and yet, just a couple days ago, there I was, being invited to once again share in undreamed of riches for an investment of only $500.

Pffffft. At my office I get "invoices" for obscure yellow page inserts that were never ordered. Has anyone gotten the envelope that looks just like a bill from the IRS? Yeah, you always open that one. I'm still getting my Father's mail at my house and I wonder if Troll is right about the AARP because my Dad got more than his share of junk. Matter of fact; we throw out more than 90% of what is delivered to our home. Daily. What a waste.

what would really tick me off is that my mother obviously got the same mail and in her beginning alzheimers stages she would completely freak out over mail that looked like it was from the irs or from official federal mortgage places, etc ..

For mail I think our ratio is about 3 to 1 junk to legitimate. On the telephone it's about 1 to 3. It's very annoying. And it seems like anyone that gets your information sells it to someone else. Our motor vehicle department sells personal information lists to advertisers.

Oh, don't forget paid fundraisers. The folks that call saying there raising money for such and such sheriff's department or the volunteer fire Dept of Hicksville. We used to give money to several of these groups until I did a little checking on them through our secretary of state's office. Turns out that most of these paid fundraisers keep almost all the money they raise. One police group that we were giving a few hundred dollars a year to, was collecting over $250,000 a year and gave the actual charity less than 10,000. Because of it I now have to research any charity were going to give money to. More time that I don't have.

Here you've got me running on again.

There is a fix for this.
Just require the USPS to charge full rate postage for all the junk mail. No more "bulk" rate postage.

Actually I think a cool advertising incentive for the USPS is for there to be bulk pricing for Christmas cards (I miss them), St. Valentines, St, Patricks, Easter, July 4th and Thanksgiving.
Maybe my birthday.

I know those who pedal direct mail advertising say they are the reason we still have a USPS but I think it a poor exchange.

Maybe we should borrow from the Chickory comment and bulk mail the
"top" back to Hawaii.

Amen to all y'all!

Hope you can play Haiku Monday this week. Hosting at my place. Theme is PERFUME. Write as many as you want, but I'll be judging only one (be sure to indicate which that will be.)