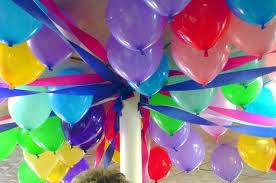 Iffin' y'ain't heard it yet, thar's a New Year's Eve (an' beyond) blogger party gatherin' speed at Boxer-Babe's in the Pacific Northwest--an thanks to digitizin', we can all be thar too!! Come an join the fun--jes' send yore RSVP to Boxer here: PARTY RSVP whar she lays out rules of fun an games! ALL is welcome.

Think of it like a blogger block party, whar' ya' roam from home to home to see whas' up at each Add yore own fun blogger activity an join the riotous fun!!

Heah on the Porch thar will be PRIZES for the winners of word wizards/ hilarious fill in the blank games / an' an "remember when" contests to see what ya REALLY know about a fellow blogger (heh!).

Pssst! Tell me about the WORST New Year's party ya ever endured--an now, relax, cause this party will charm ya'.

Y'all come now--the more the merrier!
Posted by Aunty Belle at 4:46 AM

Labels: Ring in the New Year

Happy New Year Aunty! Trying to think of the worst party....can't remember! But I DO remember one year back in Chicago, I was going to this woman's house for her party. She was fascinating and crazy at the same time and I met her when she worked as the door bitch for Limelight.

I only remember two things about that night (no, I don't think I was drunk, just not memorable) I remember walking down the street in high heels and a beautiful lace dress, freezing my butt off and trying very hard to miss the ice spots, almost falling an breaking my back. I remember cussing and saying to myself, "I MUST move where there is NO ice!"

And I remember she had this HUGE chandelier that she bought in Italy. It was all hand blown glass in pastel colours, rosebuds, flowers, it was beautiful and at least four feet wide. It was also too big for her house and hung about a foot off the floor! We all had to walk around it. Weird.

might be the time that V and i were in a hi-falutin restaurant when a fella came along and put his face to the window and licked all around on the glass right thar in our faces! this went on for a few minutes too - an intense french kiss he gave that plate glass. course we was somewhat put off our vittles.

i hate new years eve. YOUR part for the party sounds like grand fun. i will be here.

I don't know how it is today, but when I was in high school, crossing the border into Juarez was a no-brainer. One NYE, some friends and I decided to head south for the cheap beer and seedy bar festivities until one of our crew spoiled the fun by drinking one bucket o' Coronitas too many. Passed out cold and there was no rousing her. So the other three of us had to take turns carrying her the two miles to the border crossing. Where we were promptly stopped, questioned, and our parents called. Still, the fact that we were allowed to get in our car and drive back to Albuquerque blows my mind to this day. Nowadays, I'm sure we'd be strip searched and placed on some kind of terrorist watch list.

Trolls don't follow the herd and party on NYE. But I did get stuck baby-sitting THE MOST COWARDLY DOG ON THE PLANET one NYE.

A German Shepherd, believe it or not.

Yes, the same breed that has been the dog-of-choice for Centuries of Armies also can produce THE MOST COWARDLY DOG ON THE PLANET!


Fireworks and illegal immigrant Obama voters firing pistolas made HIM (yes, a boy dog) inconsolable.
Whined all-night and wouldn't stray more than 2 inches from me.

I think I can honestly say all the NYE parties I've been to have been the worst. Don't really enjoy the holiday probably because it's one of those Drinking Holidays. I have a hard enough time dealing with most people when they are sober but pour a bunch of booze into their gullets and let them out upon the world? I much more enjoy private, intimate NYE celebrations.

Yay! For Aunty. Thanks for being our Host in Florida. Can't wait to see what you'll be doing.

My worst was spending the night (and weekend) with a couple who were clearly breaking up. After dinner there was a big fight and drama and when Midnight came around? Not a lot of kissing.

yick! dear mercy, why'nt the restaurant folks take a broom to that fella? I'se so pleased ya's comin' by fer the blog party! Gonna be funnin' all y'all wif some teasers.

Moi!
TREMBLE! NO WAY that would be remotely safe these days. Shudder!
But, what we all wanna know is did ya have on stilettos that night?

I hears ya! Aunty ain't a fan of NYE parties--find any an all 'scuses to avoid. As fer dawgs, if ya git a coward jes' put that thang outa it's misery==or stuff it fer a pillow. A cowardly dawg jes' ain't a dawg a'tall.

Happy almost New Year's to you too.

I'se in yore camp. I ain't learnt how to drink yet--onc't in awhile I have a glass of Prosecco, an I does like simple village whites in France/ Italy/ Spain. Thas' 'bout it. (an since I cain't git over thar often, my consumption is near to nuthin'.)

Uncle on t'other hand? well, let's jes' wink at it--he done played fish wif' his frat boy buddies only after takin' Aunty-Teen home fer her Marine Daddy's 11:00 curfew. Then when Aunty-Teen an Uncle hitched up, her bein' under age (fer drinkin' not fer marryin')an all, thar' wuz a lag afore he tried to teach her the ways of grown-ups. It plain jes' din't take.

Haha, Aunty you are funny! You know La Diva would never DREAM of wearing flats or sensible boots with a cocktail dress! Since I wasn't giving up stilettos anytime soon, it was just easier to move to place without snow.

Odd that you could get married before you could drink, isn't it? I'll take a sip of Uncle's bourbon if he doesn't mind sharing! (Does uncle like Manhattans?)

Aunty, wise move to stay sober. That Uncle is one crafty man...you never know what sort of shenanigans would happen if you stopped tottling your tea.

Aunty, I have no idea how this blogger party is worked out but I aim to learn. I am looking forward to it.

I don't much like going out on NYE as I loathe being in a room full of drunks. My worst NYE was spent in an Emergency Room where on the stroke of midnight some boy with too much likker and a bloody busted haid insisted I should
"jus pucker up and relax". ICK.


Aw..that wuz a real bummer--cooped up wif' The War of the Roses. But this NYE will be a party of a different stripe__an BTW, I is REALLY lookin' forward to that cashmere wrap, Sugar Pie.

Nope--nor me either--I done traipsed all over creation ana tarnation too in high heel brogans. Heh what we wimmen-folks will do to catch a fella's eye.

Reckon I'se jes' a sober type. Hope that doan make me no party pooer--cause I'se hopin to kick up some fun heah on NYE (latish).

Oh youse gonna love this party--Boxer is the premier party hostess. Nuthin' to it--jes drop by every few hours at Boxer's place, see what's up over thar', leave fun comments, invite folks to yore place ( which ya will have decorated with some theme) then make the round to see what other's is doin'---some will invite ya to play their games/ sing a song...have a virtual drink, solve a riddle...

take a look at the Dec 8-9 archive of Boxer's to see how it went. Promise youse gonna have jes' the swellest time.

darn it! i need to get with it. blogs are getting festive around here.
worst new years? i'll think on it ...