At Pamokc's blog whar' Troll's Haiku is carried on, Fishy suggested that our bloggers carry on both Troll traditions, Mute Monday and Haiku Thursday by combining them--Fishy gave us an example of her idea wif' ISTANBUL as her theme--an LO! Behold! an idea were born --folks is tempted to plan a BLOG SUMMIT in Istanbul FER 2011 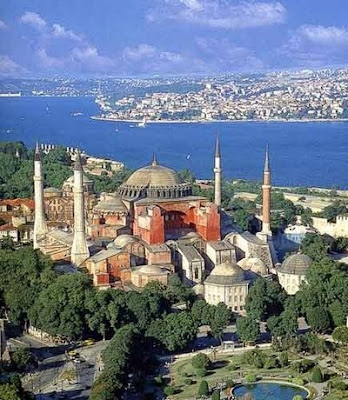 Aunty loved Turkey, an' I needs an excuse to go back-- an' can tell ya you will LOVE IT too! As mah offerin' to hep lure all y'all to such a summit, may I introduce ya to:


Jason Goodwin, A Cambridge educated writer of history and historical fiction whose fascination with Istanbul drenches his Yashim the Eunuch stories: The Jannisary Tree, (winner of 2007 best mystery) The Snake Stone, an' The Bellini Card. ( his personal pilgrimage, On Foot to the Golden Horn is also HIGHLY recommended.) Yashim is a detective in the employ of the Sultan. He is also a phenomenal cook (are ya' thar' Shamy??) I assure ya that youse gonna love Yashim and his adventures--1800s Istanbul, harems, murder, intrigue, politics, food, history and dern good prose--what else does ya want in a book?

Heah is Goodwin is describing his inspiration for Yashim in Istandbul

Aunty would like to make a modest proposal--let's all read a Yashim book, an see iffin' that doan make ya wanna git to a blog summit in Istanbul in 2011!


Oh! this is a wild idea, but why not? I is savin' mah pesos... sell yore stuff on ebay, hawk yore garden veggies from a cart, do some overtime...or hop aboard yore magic carpet!
Posted by Aunty Belle at 12:33 PM

now i know what to read during the summer!
thanks for suggesting these.

a blogging summit in istanbul sounds exciting.
maybe i can fit it in between plans to go to germany and cuba next year.

Aunty Belle,
So glad you are on board with the idea of the Visual Haiku's. I does like your notion of calling this new game MMHaiku especially since our hostess, PAM, said Mondays are a better day for her to do this game.
WooHoo, I am looking forward to this.

Well, I'm not big on travel (I'm pretty boring that way) but I'd like to do the visual haiku so count me in.

CUBA? wow--can I go wif' ya? I has somethin' I wanna say to Ole Fidel.
Foamy, come go wif' us'uns to Istanbul.

Fishy,
MM Haiku? okaaaay--but uh, where / who is the theme administrator?

BuzzK,
aw....traveling wif bloggers might have a whole new unboring dimension-- but so happy youse on board fer the continued Haiku--since youse a winner so often, we need ya!

Aunty,
Last I had a handle on things,
PAM is our host and BOXER the judge. Still unsure what day of the week.

Hi Aunty!~ Thanks for the book suggestion, I will definitely look it up. As re MMHaiku day .... I have posted several themes for upcoming weeks. Once the Monday/Thursday things gets settled we will have a more specific day. However,r ight now it will work as a weekly thing, me thinks. If it takes Monday to Thursday for everyone to post, fine by me! I'l get with Fishythis week.

Haven't read Goodwin's books, but I will now. Oh, I would so love to Blog Summit in Istanbul in 2011. It's one of my favorite places of all time.

GAD! I JUST got that song OUT of my head! Can ya guess what one I mean?

I may be missing something, but what good is having access to a harem for a eunuch? I mean gee whiz, all the gossip and none of the glory.

Istanbul is an ambitious destination, I'm not sure I would make it though.

Hi Aunty, what a beaut suggestion! I have a new friend from Turkey,I think she is even from Istanbul and raved about "home." She married a dear friend of ours and we met and became fast friends on my last trip to Australia.

LOVE Turkish food and would love to get there one day....but I think Paris for my 50th might be first! (however, one never knows, I just might have to start playing lotto!)

im in. you know i speak a fun language i use in places like turkey - great for out witting carpet peddlers.

Aunty why not have the blog summit where
more can join?,