Wilbur Murdock stopped us t'other day up at Ace Hardwahr Store to tell us that Otis Purdy was was sittin' low in the Slough of Despond.

I tried to show some sympathy, an it warn't all a feint. Uncle shook his haid an' made that suckin' sound in his cheek that menfolk make while they try to think what words to out out in the airspace that they woan be sorry fer later. I knowed right off that Uncle woulda said somethin' off color iffin' I hadn't been standin' thar. But I wuz. So he jes' turned his head to the side like an owl an' said, "I could told Otis that men like us ain't got no bidness wif' an Astrid." 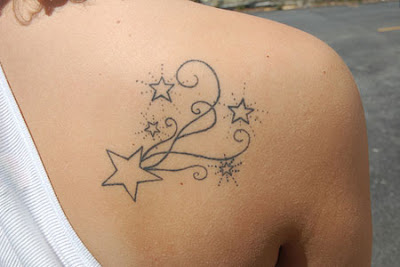 "Well, two days after knowin' her, he wuz seein' stars alright an' he wouldn'a heard nuthin' nobody wuz to say on it," Wilbur mused.

Me an Uncle got in the buggy an drove southwest toward home. We neither one said nuthin'. The sun hung low, huge and red over the horizon like a benediction. ( I stole that line from a very famous author's newest book...but I reads Flannery so I knowed that he done lifted it from her, an' I can return the favor). When an ole friend does somethin' out of character an pays a heavy price it's hard to know how to be of help, ain't it?

Otis Purdy was a gently raised cracker boy. We ran around as young'uns wif' his Dubois
cousins, an he would tag along as the mascot onc't in awhile. His daddy was maimed in a machine accident at his factory when Otis were still a sprout. After that, Ole Mr. Purdy retired to his library whar' he sat in his wheel chair an dictated story after story, though I ain't never heard that one was published. The boy would sit wif' his daddy in the afternoons after school while Ole Man Purdy drank his "tea" an' read the chile' what all he'd wrote that day. Otis' Mama ran the bidness, but his daddy wanted Otis groomed to take over soon as he could be respected by the factory folk. After college an' a stint at bidness school, Otis came home an rolled up his sleeves. But his heart warn't in it. He wanted to write stories too.

BY now his mama wuz care-worn despite the hep she had from well meanin' family an' friends. All she wanted to see Otis find a sweet girl an start a family, so she tried to shoo him off the place. This caused consternation behind the doors of their large frame house on Shady Lane. Seemed a veil fell over the place. Mr. Purdy wrote in the big window over lookin' the back lawn, Otis went to work dawn to dark-thirty, an' Mrs. Purdy went to the office after Mr. Purdy was settled fer the day. An' thas' the way they lived until Marguerite Purdy slipped out of this vale one fall mornin' as she stretched up to tie a bloom laden cane over the rose trellis. A stroke, said Doc Wallace. 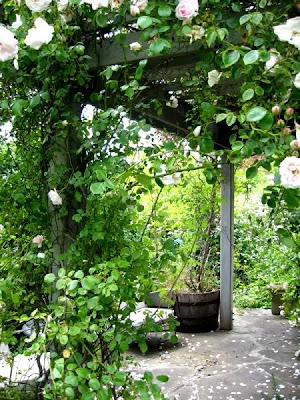 After his accident, Old Man Purdy had given power of attorney to Mrs. Purdy. All those years she did what he tole her to do, but after the consternation, seems she made up her mind to do somethin' fer Otis that Mr. Purdy could not undo. She quietly sold that factory and the land under it, but leased it back for the term of 7 years after which the new owners could do as they seen fit. All the while she kept thangs runnin' wif' none the wiser. At the time of her death the lease had jes' eight more months. Marguerite din't stick the money from the sale of the factory in a her sock drawer. Her idea was to invest in the same raw materials the factory paid big dollars fer every year. After the funeral, when light was thrown on the books, both Purdy men was stunned. Marguerite split the the money down the middle: Mr. Purdy had a fat nest egg, an' Otis was free of the factory and of his daddy's purse strings.

But habits of the heart is hard to break, so Otis wuz found most afternoons wif' a Pinot Noir in hand readin' to his daddy what all he had written that mornin' in his upstairs aerie what looked east over the lake at the end of the lane. Some local ladies of a certain vintage tried to lasso Otis, now a desirable middle-aged bachelor. Otis slipped loose every time an' many a home grown lady wuz left dejected.

In November the local paper featured a book review of Otis' debut novel 'bout Cracker Florida. At the local book signin' soiree we wuz introduced to a thirty-ish female in a one shouldered purple sequined thigh skimmin' dress wif' chopsticks in her hair. She had a constellation tattooed over her exposed left shoulder an' was introduced by Otis as "Astrid, my publicist."

"Is that a real name?" Uncle whispered.

"Depends on whar' youse from," I said under mah breath.

The next month we heard from the local candy shop that Astrid was miffed that this "backwater swamp" did not even stock mango marshmallows fer her Jamaican version of s'mores. We wondered who wuz eatin' them smore's as none that I knowed had been invited to a shindig that featured mango smores. I woulda remembered that.

Starstruck Otis was off in dreamland, but ole Mr. Purdy could not be charmed by Astrid. "Son, a woman like that will make a fool out of ya twice before ya know it." 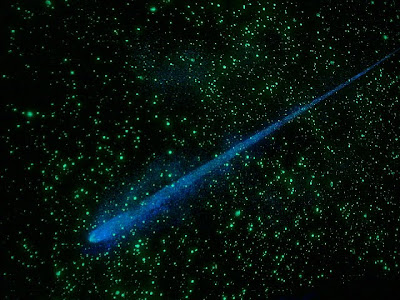 Soon enough Daddy an son were barely speakin'. In February Otis got hisself a penthouse apartment up in the city. A design team wuz called in to create a star-studded decor --the foyer is tiled map of the solar system. The terrace sports a half moon shaped hot tub an huge telescope. But Astrid and Otis warn't in that penthouse perch much on account of them travelin' around promotin' Otis' opus. Until last week.

Astrid has a new assignment. He writes sci-fi westerns.

Otis is takin' it real hard. Word is, she woan even return his calls or text messages. Florrie Dubois, his cuzin, say he jes' sleeps till afternoon an sits up on that terrace thew whole night long. She tole us'uns that all Otis will say is how he feels purty stoopid, an then jes' look over the rail toward the dark horizon watchin' fer fallin' stars.

The town is divided of course--some think Astrid ain't nuthin' but an opportunist who took advantage of a trustin' soul like Otis. Others, led by ole Mr. Purdy, say Otis is jes' one more middle aged fool who should known better.

He be too busy star-gazin' fer the moment, but when Otis gits around to sittin' a spell here on the Porch wif' Aunty, reckon I'll tell him how excited I'll be to read his next novel that I'se shure will feature Astrid in some guise or t'other.
Posted by Aunty Belle at 12:20 PM

he should have met himself a sensible girl named mary pearl or lou ann or betty sue ..
;)