The Good Wife: Sing it Tammy! 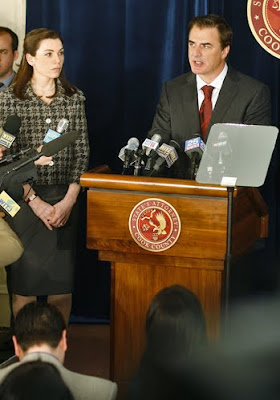 But some folks pointed me to a CBS link fer it's new series, "The Good Wife" a Ridley Scott drama based on 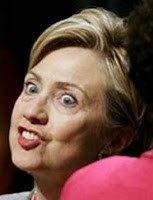 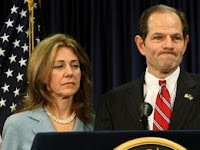 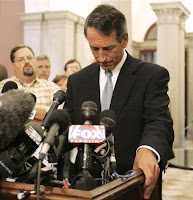 
The drama has its moments an' the actin' is good enough, the writin' is intelligent--but these wimmen is less a mystery to me than their spousal buffoons who crave a very public power then wind up on breathless Diane Sawyer's girly gabfest who's empathizin' wif' his fall from grace while he goes on explainin' that he doan think extracurricular acrobatic appetites caught on tape discredits him wif' his voters.

In this case, art is definitely reflectin' America life. It's a cryin' shame.
Posted by Aunty Belle at 10:19 AM

Aunty,
I went to have a look at Sophie Maes food art, and the veggie art. Can ya just imagine what Boxer could do with these?

As for TV imitating the politicians,
well I didn't find it too entertaining on the news never mind
tuning in for more of the same as
"drama" television. I do like Julianna Marguiles, (the woman who launched George Clooney) but not enough to be a regular viewer of this show. And, picky as it may seem, the title " The GOOD Wife" somehow implies acceptance.
I ain't on that page.

what would I do? I must go look!

I tried to watch this show last Fall, but it felt soooo much like reality, I just let it go. Primetime "news" (cough, cough) and television are so blurred nowadays, I've nearly given up trying to get my news from a television. I read online, I read blogs, etc.

It actually made me dizzy. Wow. Thanks Fishy, I actually have an idea......

It's quite possible I'm missing the point, but it just so happens as I was flippn channels last night, after watchn a documentary called "Me and My Big Breasts" ... (Gotta love BBC) I came across a BaBa WaWa interview with the first lady of South Carolina and it was so refreshing to hear her NOT stand by her cheat'n man for the sake of HIS political career.
At least she can hold her head up, unlike those other women.

I had a retired lobbyist (one of the good ones) actually tell me that the most difficult part of his job was keeping up with the sex. Not on his part. But remembering who was sleeping with who. A handy piece of info to have.

As fer yore First Lady--Jenny was a super star Wall Street-er she doan need no much brained husband --but it hurts my heart fer them beatiful boys they have--those poor young men--a daddy like that? What a sorry, shiftless worm Mark Sanford is to hurt and embarrass those four sons like that.

Did I make mahself clear on Mr. Sanford?

yep, it is tought ter tell where drama eds and real life begins....eeesh. But bein' a Ridley Scott thang, thar's some decent writin'.

Cain't wait ter see what ya does wif them food art inspirations!

baba wawa...heh. Gag. Ya know--I wish Jenny Sandford woulda kept silent--no book, no interviews...jes' have the dignity to shake the dust of that simpleton, but REFUSE to play to the media jackals.

We has some ole timey friends--known 'em 25 years afore they's into the political circus...they say it would turn a maggot green.

this heah is what I cain't figger out--why does we put up wif this garbage?Why do we elect these low-life fungus?

I agree with FC that it's an injustice to put Mrs. Sanford in the same category as the Hippo-Hipped Hildebeest and the utterly loathesome Edwards couple.

The latter KNEW their husbands were relentless lifelong whoredogs, used taxpayer dollars to facilitate their affairs and the cover-ups, committed felonies,
and, at least potentially, were a National Security risk due to blackmail possibilities.

Aunty,
I agrees with you, Jenny Sanford became aware of the Governors South American love months before his Applachian hike hit the news. She initially agreed to counseling and a commitment to work through their issues. But then, once he cheated on THAT enormous grace, she was out of there. She also has refused to be a buffer between him and his sons new opinion of Dad. Word in state is his boys are shunning Dad for bringing shame to their name and dishonoring their mother. Jenny is smart, successful, comes from great roots and will emerge from this just fine. Like you, I wish she had avoided the book schmiel but have heard she has had her say, on the record. to forestall Mark's plans.

Boxer,
I can hardly wait!

Troll-Man,
I agrees wif' ya...mah point was not that I (Aunty) thinks Jenny is in the Hidebeast or EEEEW! Edwards category, but that the creators of the CBS dram , THE GOOD WIFE used Jenny as one of the women in the composite they created to come up wif' the Alicia Florick character.

watch the TUesday night episode of The GOod Wife an' see if ya think she is more Jenny Sanford than anything else. Heh.

Like you, I hate she gave interviews--but I can see why she might have written her story first. As fer them adorable boys--a father that could do that to them should be horsewhipped within an inch of his life.

Any person who goes on national TV and talks about their "soul mate" and it's NOT their spouse, is a fungus that can be scraped off the bottom of my shoe. and let's include John Edwards in that happy group, too. I think the whole "ripped from the headline" television only makes it worse. Fictionalizing these stories must be horrible for the people who are actually trying to live through the ordeal.

I havent actually watched it yet but it is recording on my hard drive every week. I have a softspot for Julianna Margulies so Im looking forward to sitting down for a marathon session with it :)