The Lisbon Treaty became effective December 1, 2009 in defiance of most of the people--- who now must live under the horror of the newly formin' USSR (ain't my words--see Russia's Pravda..reckon they oughta know) 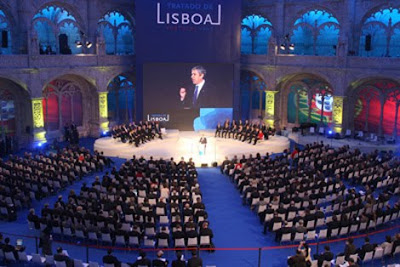 Henceforth the "people's parliamentarians" doan represent Irishmen or Greeks or Czechs. Nope. The parliamentarians represent the citizens of the EU. None of the countries is sovereign any longer--all subsumed into the belly of leviathan. 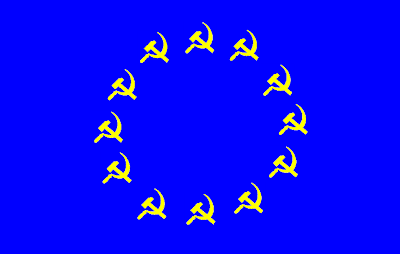 Thar' were a couple of would-be heroes who attempted to stand before the tanks, as at Tiananmen Square, but lacked final fortitude. The Czech pres, Vaclav Klaus, refused to sign the Lisbon Treaty, but the Czech Parliament an' high court said he had to --or be impeached.


Klaus tried to warn his people this would sign away their sovereignty--a freedom barely 20 years ole, them poor Czechs havin' groveled under the USSR boot. Klaus pleaded...but in the end he signed it. He shoulda forced them to impeach him so he could give witness to history of what had happened.


I could pen a tome on this heah horror. Lemme distill it fer ya: A free peoples spent 50 years systematically under-edooocatin' theyselves on matters of history an' philosophy such that they ain't no longer able to discern serfdom from freedom. Them countries that shoved back (Ireland) at first, got slapped hard from they own "leaders." An' the people whimpered, but they din't buck it, so now the bit is in the mouth and the harness on they backs. 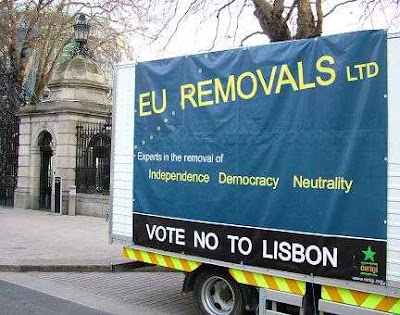 What do it mean? In the grand scheme it means the world is closer to totalitarian global hegemony. (thas' academic speak fer NWO) In the smaller scheme it means 500 million new serfs will be used as fodder, they daily lives ever more orchestrated by the demands of the European Super-State. An fer the the EU neighbors?


Why jes' take a look at the enraged vituperation the EU has turned on Switzerland's still (barely!) free people when they voted (ha! what a novel idea--to vote an' have it mean somethin') to ban minarets --ya can have a bell tower, but ya ain't goin' to have no new minarets in the Cantons of Switzerland. 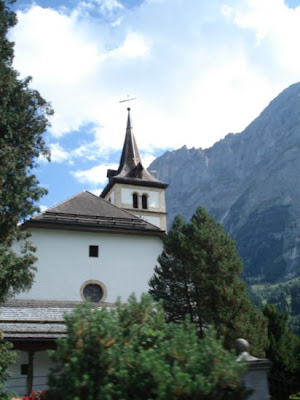 The Swiss voted to maintain they sovereignty an' culture. (As one perceptive Swiss noted, "In which muslim country may we build a cathedral?") But for how long shall the Swiss be free? Note the people "defied their government by approving the right wing motion to ban minarets. "

Ya' mean the people voted to remain SWISS and that is defiance? ...defiance of what, precisely? Defiance of a homogenized world run by a syndicate of "planetary leaders."

Can ANYbody still recall that the "representatives" of the people are supposed to enact the will of the people? No, no, happy-shiny-people, the Swiss people defied no one--it is the "leaders" who have tried to defy the will of those they were elected to SERVE. But instead of serving, these "leaders" attempt to tyrannize.

Death of freedom is spreading--stiffin' yore spines folks--soon it will be on yore doorsteps.

Aunty,
Florida signed way it's sovereignty in 1821.
Our country, the USA, is all the better for it.
As are the Floridians.

"defied their government by approving the right wing motion to ban minarets. "

I saw that same article. Disgusting that it wasn't labelled as an EDITORIAL because that's what it was.

oh FC, I wish I could agree wif' that.

Sadly it ain't the same. Florida did not have its own language, customs, long national history...to have yore nation gobbled up by a super state that will decree from afar every text in schools, every traffic rule, every holiday and what constitutes "fair practice" or what the local standard of values may be--this shure ain't mah idea of freedom.

Simple example: for much of Europe the age of consent is 14, and the EU wants to make that uniform--youse a teacher, FC--that sound like a good law to you?

Prostitution is legal in most of Europe--now that will be made uniform too--with the age of consent 14 and prostitution, "sex work" legal, does this sound to ya' like somethin' all nations should have forced upon it?

Or turned around, when does ya think a nation, a culture, has the RIGHT to self determination? These is the kinda thags what worries me so.

The worst type of Committee mentality.
Terrifying stuff Aunty ... youse a good warrior but lessen some more pick up they sword ....

America is gonna have a slew of them bad thinking kids marching against those silly old ideas of theys parents and grannies. If it gets delivered to their brain on a screen it is real to them because they can see and "experience". If it comes to them on the pages of a book, or a founding document ....nada, nada, nada.

The principled foundation of a decent civilization is unless youse okay wif' wickedness ruling over ya', be prepared to accept death rather than collusion wif' wickedness.

We used to call it bravery.

There is an essential difference between the European and the American mindset. I know this first hand because my mother was German and I speak regularly with my uncles, cousins, and friends over there. And that difference is, basically, the Europeans don't know how to assert themselves in any way that doesn't eventually devolve into tyranny. So afraid are they of anything that smacks of ethonocentricism or cultural insularity or national identity, they will do anything to appear as homogenous as possible these days. Moi, I'm mostly worried about what's going to happen to the quality of the cheese and wine coming out of France from here on out.

Youse right 'bout them Europeans --an' I hope youse right that Americans is different, but the global mash down on all is Europeaninzing American academics, bidnessmen and nearly all our pollyticians.

defied the gov. wow. our pols act like that too. how about pelosi calling town hall people nazis. right. question your corrupt goverment=nazism.


not really. i declare chickory the independent republic of chick. do not tread on me.

in all seriousness tho...this is grim terrible news. and yes we are next. and our people will go for it im afraid.

Pup, is a passport to the Independent Republic of ChicK hard to obtain?

not for brainiacs that can cook!

Americans have crossed a mental line beyond which they are no longer able to grasp the meaning of "enemy".

Who is the bigger enemy? The deranged Muslim, Nidal Hasan, who shot to death a dozen of his fellow soldiers in the name of Allah?

Or, the US politicians who refused to name the reality before them for what it is? OR, is the worst of all Americans who, after Fort Hood, did not hold their leaders accountable for the tragedy caused by flaccid politically correct policies toward a known, violent enemy?

You cannot preserve your civilization with your minds tied behind your backs.

I can carry fire wood and fix the rocks around the fire pit! Does this give me entry to CHICK?

They're all drinking the kool-aid, Aunty and it makes me seriously sad.

You have to express more your opinion to attract more readers, because just a video or plain text without any personal approach is not that valuable. But it is just form my point of view

You have to express more your opinion to attract more readers, because just a video or plain text without any personal approach is not that valuable. But it is just form my point of view

This is my first visit here, but I will be back soon, because I really like the way you are writing, it is so simple and honest