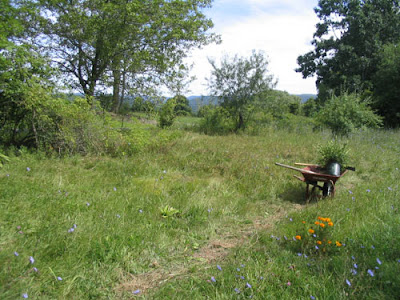 I grinned down the porch steps at Elmo Wiggins, "Same as we wuz last night Elmo when ya' strolled over this way. Nuthin' has changed in 15 hours other than the sink is full of dishes--again."

He nodded his haid absentmindedly. "Well, but I seen a wheelbarrow out in the side yard, so I thought mebbe ya' had a project about to commence."

"I reckon so, Elmo. Uncle is hidin' here at home avoidin' the Pork Rind office, so ain't no tellin' what he done drug out the buggy barn an' has set his mind to doin."

He stood there as if he were part of the landscape, eyes off to the distance. "When he hides, he hides at home, huh?"

Elmo scuffed the toe of his shoe at the steps, "Well, reckon I'se hidin' heah. I told Dottie I promised to hep out over heah when I seen Uncle's buggy in the drive. "

"Elmo, what sorta spat is y'all two havin' that ya come over heah to hide from Dottie Mae?"

Scuff scuff went his shoe against the lower step.

"Aw, nuthin' really. It's jes' that she has gone to repeatin' everthang I say --as iffin' I couldn't hear her. It's maddening to have a woman repeat what ya' say like ya' wuzn't even theah."

"Last night when I come home to supper I looked on the stove to see what was cookin'. When I seen inside the pots, I said,

" Brussel sprouts an' beets? In the same meal?"

Then she snapped back, 'Well, Elmo, I'se jes' tryin' to serve up some colorful food.' "

" ' He doan want colorful food', she said wif' her mouth all scrunched up."

I snickered behind mah hand. 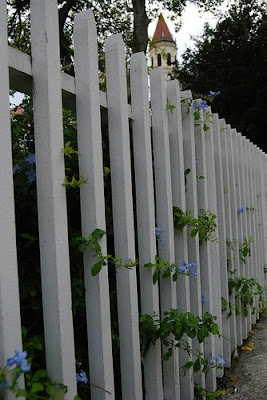 Scuff scuff when the toe of his shoe. "Why do women say back what ya jes' said when you already heard it from yore own self? Who's she speakin' to?

It gripes, me Belle. Doan know why but it do."

He shuffled off toward the side yard where Uncle planted the wheelbarrow but so fer, nuthin' else.

Oh too funny. Ya gotta know when to leave some space in a close relationship, eh???

I have heard it said, from a lady or two, that men can be irritating just by being men. I have never quite understood that, but I will sort of let it slide, accept it on faith. But women folk are the best at choosing to be annoying, I think. It is their social nature that gives them practice or something?

And space does help. As I liked to say to my last girlfriend, I can't miss her if she is still there. (she is probably still repeating that half under her breath, to figure it out).

we never repeat what the other says ...
cause we never listen to each other anyway ...

Mr. Boxer HAD a very annoying habiting of answering "what?" to every question I asked. One day, I didn't answer fast enough and he answered my original question. Huh? For years I thought he was hard of hearing. Bwahahahahahah.

Well, I don't have that particular annoying habit, but I'm sure there are a few others I trot out on occasion. Like Mr. Boxer's. Then again, I did have an excuse. I honestly spent the first 2-3 years with S.B. just trying to figure out what he was saying. Now, I'm fluent in southern speak :o).

Pam,
I know thas' RIGHT! Thas' why I doan begrudge Uncle his huntin'.

ha! very funny line--gotta remember it. Women is another species, JTWII(jes' the way it is )

Oh no Sugar Pie, youse learnt Southern an CAJUN too !!

HOWL to Moi .... must of spent those first coupla years using alternative communications.

Here at the Pond, we have PhD's in communications ....Pretty heated Debates :-)

We're coming up on 18 years of marriage this weekend and I swear ... without a good man cave for him, and business trips for me? We wouldn't have made it past 8.

Funny stuff. I saw a news story once where they ran sub-titles when a Cajun spoke in his version of "English".

I thought all Trolls could speak Cajun.