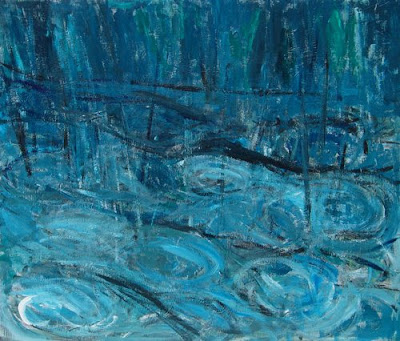 Din't wanna miss a drop of it, so I got out bed came down stairs. Got half a mind to go out in my nightie and git soaked. Nuthin' like a drought to make ya appreciate rain.

It's quiet, save the pouring rain. I'se readin' about cantankerous saints--mah very favorite sort. Ya know, the ones who love humanity but gits annoyed wif' people. They move to the desert. Or up a cliff face. Somewhar' quiet and devoid of human caterwallin'. I git that.

But did'ja ever notice how dearn few hermits The Good Lord lets be? Saints din't git saintly by looking dreamily toward heaven wif' that otherworldly shinnin' countenance ya see in picture books. 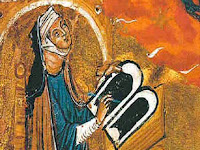 Ah, no. Saints is gritty folks. I mean....gritty. Think about little Hildegard who went off an walled herself in as an anchorite. Think the village would git the hint? Heck no--letters and visits poured in--even Henry II and his Eleanor sought her counsel. Ya jes' cain't git no peace this side of heaven. Ya might as well quit wishin' fer a monastery to escape to an' jes' go ahead an deal wif' all the souls in front of ya'.

Poor Hilde, 1oth chile of a rich man, had been an apprentice anchorite wif' the beautiful and rich Jutta (who lived in a cell adjacent to the church...gick! What kind of people call a poor baby girl a gutteral grunt name like "Jutta" or "Hildegard"?? No wonder they tried to hide.) Hilde jes' wanted to write about her visions an' make a few herbal remedies an' write a tune or two. Nuthin' doin' Hilde! Git yore head outa the clouds of antiphons an' speak to the live people on earth.

She were so cool that now idjits like new agers try to appropriate her. She would'na given them a sou fer their silly ideas. More marvelous by eons is Hilde's real work...

which makes me think of Sister Wendy, another would be hermit, an wif excellent reason. She has buck teeth an' an unfortunate Cupie Doll, Sweetie Pie voice. Ya know the playground bullies never run outa mean stuff to say to her--mercy. 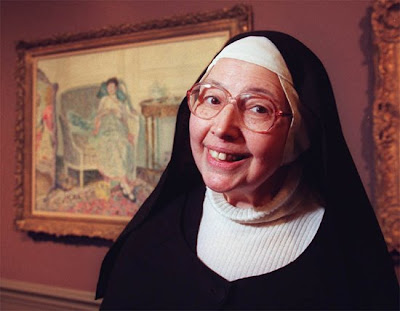 But God has high standards fer suffering would-be saints (wha? ya thought it is easy to become saintly?) God yanked her right out into the light of day an' smacked her down on TV, Cupie Doll voice an all.

Well, this is a weird post. What'd I imagine it would be in the wee hours of a gully washing rainy night?
Posted by Aunty Belle at 1:35 AM

Dang...ok, now it's back.
Maybe I should stop drinking so early in the morning...at work.

Is it too late for me to become a hermit? The pay's about right and I wouldn't notice much difference in my social life.

Aunty Belle,
So glad you got some rain for thirsty veggies and flowers and lawns. We've been thru an extended drought in these parts and it is grievious to watch what you have nurtured wither away. I get the run and to joy dance in the rain. Being Fishy's, mermaid and I have been out rain dancin a few times. Blowfish usually stays under roof and allows how we girls don;t have a lick o sense.

I agree, "Hildegard" alone is a reason for retreat, athough I expect in her day it was a fairly normal name. Seems like the name parents give ya can do a lot about how your character develops. Wasn't there was a song about a boy named Sue that spoke to this very issue?

On the finer points of wantabe hermits called to service. Well, I think I remember the idea is to share the gifts with which we are blessed. So maybe the character of the name lead to the development of the strength of the gifts to be shared?

Funny you should bring up this subject. Just recently I was ruminating on how I might become a bit of an eccentric recluse drifting around the Pond in my gunny sacks , maintiaining gardens and making some art. Maybe finally getting around to building those really great looking trellis designs that keep popping into my head. One day, I might try my hand on those driftwood sculptures I like so much. Mostly this is all a fantasy about retreat from a culture I am irked with and a fear the Pond will be lost in the great ongoing redistribution.

Wish I had a swwet gentle rain to sing me to sleep.

well so far my hermitage is working out fine. im on the francis plan: deer, bear, chicks.....trout

No idea who Hildy and Wendy were. I thoroughly enjoy being a hermit-troll and God would have to give me a VERY CLEAR sign to get me to engage with and save humanity.

Actually, he'd have to give me TWO of them. Because, like Jonah, if he asked me to save Nineveh, I'd be high-tailing it in the opposite direction.

I'm a Happy Hermit - and despite the long winter we've had, I'm actually a fan of the weather we have in the PNW.... after 75 degrees all weekend, the rain returned on Monday night with a vengence and I stood out in my cabana/tent and listened and smelled the rain. I totally understand your desire to let it drench you.

Gnomeself, I git a chuckle outa ya' more'n ya know--yep, pay and social life jes' about right.

Fishy! Of COURSE ya love the rain, youse a fish...but is thar' such a thang as a hermit fish?

Troll, oh, ya know, I doan think I'se supposed to save anyboody. I figger God does that part, all I need to do is be thar' when folks is expectin' a human touch. An' on Nineveh, heh...I hear ya!

It takes all the cache out of being a hermit when folks like K9 and Boxer and Gnome think escaping the city for a weekend makes them one of us.

Glad you agree with me about Nineveh, Aunty! Until Christ himself tells me where I'm wrong, I'll think Jonah was right!

Troll forgot that jonah had a very clear sign when the whale spit him up on ninevehs shore?

My favorite saints are Joan and Teresa of Avila. Fascinating women.

Although I require large amounts of time alone (and, thankfully, get them), I'm also very social. It's not people – or the state of the world - that I object to. It's just that I need silence in order to think, process my thoughts, work, and enjoy the great outdoors. Chatter gets in the way of all that.

there's rain on my post for you today. xoxox have a great weekend.

As a child I wasn't taught about Saints, aside from the Disciples, so I feel like I've missed something. However, I love Peter. I adore him...because most days I feel just like him. My mom-in-law was struggling with something the other day, a particular fear she has, and she felt guilty for not trusting God as she felt she should. I asked her, "Mom- if Peter lost his faith- WHILE he was walking on the water WITH Jesus an arms length away, what do you think YOUR chances are of faltering in your faith?"

No, the life of a Saint can not be easy. It's the hard stuff that brings wisdom. Hugs Aunty Bell :) it's always a pleasure to sit on the porch with you :)

Hey B-Babe! I swam up yore way to check out your rain...heh.