Why there is no Mute Monday on the Porch

NOTE : SNOPES IS NOT ACCURATE in this matter. Snopes debunked the "book burning scare" with insufficient analysis that is outdated since the gubmint issued "clarifications."

Here is a snip from the American Library Association's website this week:

If the CPSIA is applied to books and paper-based materials, as indicated by the Commission’s General Counsel, public, school and museum libraries will have to either remove all their books or ban all children under 12 from visiting. This cannot be what the Congress intended…. They should enforce this important legislation where the dangers are, not with books, which are not playthings, and should remain unregulated.”

(y'all reckon that iffin' the ALA writes this "cannot be what Congress intended,” that it means them librarians is very worriet!)

When the gubmint is bannin' books--that is too mute fer Aunty. 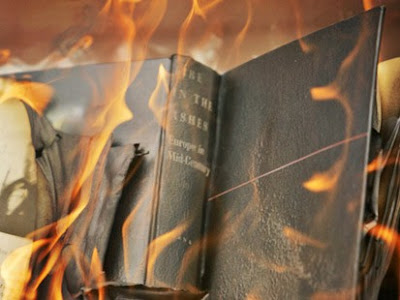 This here is a real truth, folks,

On Feb. 10 yore gubmint moved against all chillen's books published before 1985.

Read an article written by an attorney here


The American Library Association tried to prevent it--guess what? They could not git nobody in Congress to lend an ear--one poor man, Jim Demint.

Here's a snip from one worried bookseller: 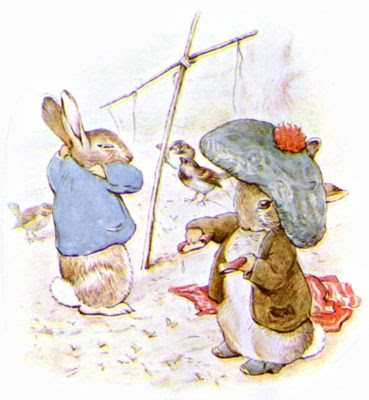 Whatever the future of new media may hold, ours will be a poorer world if we begin to lose (or “sequester” from children) the millions of books published before our own era. They serve as a path into history, literature, and imagination for kids everywhere. They link the generations by enabling parents to pass on the stories and discoveries in which they delighted as children. Their illustrations open up worlds far removed from what kids are likely to see on the video or TV screen. Could we really be on the verge of losing all of this? And if this is what government protection of our kids means, shouldn’t we be thinking instead about protecting our kids from the government?

Doan be fooled by concerns fer safety--ever hear of even ONE kid who died from readin' a book wif' illustrations made from ink wif lead in it? No, din't thinks so. The AMOUNT of lead in old inks is so miniscule that--well, ya know what this is, it is a GRAB for American history and 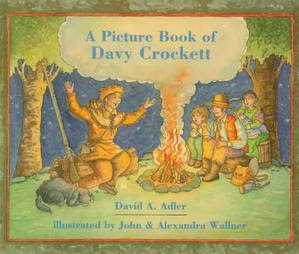 Veiled in "safety" regulations, this tyranny extends to ALL old booksellers, Goodwills, even IMPORTS from other countries. I tried to buy books from UK, no deal.

No more Anne of Green Gables or Beatrix Potter...but worse, no more American history except that written by the tyrants. How much censorship is ya willin' to tolerate?


Doan sit still fer this folks---doan take this horror lying down. Git all yore gumption up an' fight this--iffin' they take chillens books--what books is next?

GO buy old encyclopedias--they will soon be contraband too.


I love the Mute Monday meme...but LOVE my country too much to play today--got work to do.
Posted by Aunty Belle at 9:30 AM

we had been fighting it, but, no one was listenning to us.
Tell me honestly....how many times and how many people told you that the power in office was rolling over us all, danged whatever your politics are, if you're in the way, you're as likely to be shot in the face as anything.

But....so much following of a single man and his ideas led to a congressional order like this?

Well, he's OUT of office now.
And, maybe after the dust settles (If it settles) there will be some 'pay-uppance'....though the way these fancy pantsed lawyer types are, he may be put in jail three days before he dies of old age.

It sure seems like an over reaction from a chemical hazard standpoint, and I agree the books should have been exempted.

It's not a banning of the stories themselves though. That would be something very, very different to me.
This is a problem if you like antique books for their antiquity. The stories themselves aren't being banned by this law.
REAL book banning comes at the local level most commonly and it's done by schools and community libraries ... not by Uncle Sam.

actually, mine is quite the over-reaction, too.
They aren't banning the books.
They're just getting rid of the books.
Then they can be replaced.
Look....more jobs!

(i still don't favor those fancy pantsed lawyer types, though)

What what what? I have never heard of this. Good thing I just ran across my old copy of "Hop on Pop"!!!

FC,
techincally, youse right--it is the books, not the stories that is banned....but the trouble is the sheer cost of republishing these 100s of thousands of treasures is prohibitive and thus is a defacto form of censorship.

see answer to FC above.

this is more serious than most realize. It essentially erases our culture pre-1985 ( for children). I do not mean only the stories, but the illustrations that portrayed an America that decidedly different that what we have today.

This wouldn't be the first time that American right or civil liberties were taken away or restricted under the guise of protecting the safty of the nation.

Let Hollywood, TV shows and Computer software games makers fil the heads of todays youth with sawdust and take away the one shining light of intelligence and ethics available to them.

The beaureaucrats(sp?) have too much power.

"They who can give up essential liberty to obtain a little temporary safety deserve neither liberty nor safety."

And another thing: in these crunchy economic times, many families turn to local Goodwills, Salvation Armies, and thrift stores to purchase toys, books, and clothing for their families. THESE things are also targeted. So what are these folks supposed to do now? Grow dollar bills in the backyard to afford to clothe and entertain their families? Because even if new goods are manufactured to replace the old, most people won't be able to afford them.

Lastly, as someone who has a background in both commercial and fine art printing, I can tell you that the loss of these beautiful pre-1985 printed children's books is indeed a loss of ART. The original Peter Rabbits? Dr. Seuss? Barbar, etc.? Horrifying.

I guess I'm a criminal in more ways than one now since I collect just this sort of book. I don't sell them but I certainly let kids read them.
What's more dangerous, the lead paint in pre-1985 kids books or Grand Theft Auto video game?

NYD,
Exactly! Take away the good, substitute the bad, pretty soon all notion of decent good taste is obliterated.

Moi,
youse a dear to post on this topic too--thanky!

AND it is so right one--we will lose amazin' art, and imagery of / from our culture--Aunty say they tryin' to erase cultural memory.

(BUY THE BOOKS EVRYWHERE YA CAN!)

darlin' save Aunty a spot in yore cell...does ya play poker? Canasta?

Look at the video to ee how the new law will choke bidnesses:

You are more than welcome in our cell but I suspect you know a fine lawyer or two who is more than adequate at getting you out of whatever bind you might find yourself in. However we will need a prison garden so make sure you smuggle in some seeds.

Oh Aunty,
you are right, far too serious to be Mute

I have a friend whose family came to America to escape the Castro regime in
Cuba. They were sorely disillusioned folks as many who fled Cuba were original supporters of Castro in the role of Change/Liberator.

They tell stories of how freedoms were removed one at a time, history controlled and corrected, kids taught to report parents for being keepers of the past wrong ideals and other, numerous atrocities.

Too much lost, nothing good gained ... seems to be the new path to change Government is promoting.
Why are we not screaming in the face of every congressman and senator?
I spend my lunch hours e-mailing senators and congressmen almost daily. They all advise statistics do count and to e-mail all of congress not just our own representatives.

God help our country! Jim DeMint of South Carolina is a stand up, shout and be counted kind of guy and yet there was an editorial this weekend AGAINST Jim DeMint for his NO! votes and television rounds on why bailout and stimulus insanities should NOT happen. Seems the author, a Democrap Party Guru says DeMint should learn to play ball with the future and not hug dated Republican ideals of the past.

I just cannot stand what is happening to America. And unlike Cubans, we have no Democracy to flee to ,
so we better save this one.

WHATTTTTTTT??????? I think this crazy thing passed because the whole country is frozen in fear over EVERYTHING. Lead? In books? As a small business owner I am incensed that "we" are continually crushed by more regulations/etc. Shamu makes a great point - what's more dangerous? Books or Video games?

I'm happy to do some time for this - and I'm pretty good with decorating on a dime, so our cell will look fabulous. I can do a lot with gum wrappers and string. (do we get string in prison?)

Decorate on a dime! Ha! Youse the funniest!

Boxer Baby, Aunty ain't all glum and gak, please see post before MM for the recent fun me an Uncle had--heh. Know youse got a thought or two on it.

i bought som e super cool books yesterday: on daniel boone, buffalo bill, the alamo, the revolutionay war -many others. i can see they havent been sanitized by the PC police -the tyrants of our ever increasingly oppressive government thanks for the heads up yesterday. i read your post and didnt bother to comment. i went straight to atlanta vintage books

while there i picked up"

the history of north georgia

living on a small acreage farm


you are right is is DE FACTO censorship and probably just the beginning. see: fairness doctrine. also interesting how they want to finance everybody to get that digital converter box. no matter what they are going to make sure every dolt in the USSA is going to get TV, comrade


"no dumbass left behind"

Aunty,
You are welcome to the Pond anytime. Better than a jail for you and Boxer and Moi.....might make ya'll work in the garden in the mornings and e-mail the politicians all afternoons

That way we'll have plenty to eat and plenty t talk about....best be bringing the books and the 22's to protect 'em.

Happy non-mute Monday, I am up at the Pond.

Uh - WTF? That is about all I got. I have't heard of this - but just how in the world do they think this will be accomplished? Lunatics.

Bought books this afternoon from an elderly couple this afternoon...never have heard of such a silly notion they declared. Might get to another one tomorrow :-)

This is such a travesty and I am beyond words that so many beautiful books will be lost to not just our children, but future generations too. Thankyou for bringing this to our attention Aunty.

Amy had three children with Gary Chapman. Mix it up and pick a different sub channel every day. The use of these types of instruments generally makes up a symphonic orchestra. Paisley debuted the song at the Country Music Association (CMA) awards show on November 10, 2010. We don't want to "Let It Go" but we have no other choice.