The Death of Print (plagiarism, fabrication)Journalism 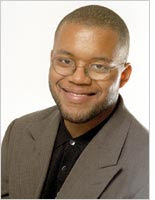 Jayson Blair, premier plagiarist for New Yawk Times, Pulitzer thief an' the domino that started the NYT slide to plagiarism's nadir, draggin' along other names like Rick Bragg, who ain't braggin' so much of late.

Jes' cause it's funny:

HELLO? Bailout people? Mr Secretary of the Treasury Hank Paulson? Aren't you forgetting somebody? Like me? I'm a print journalist. Talk about financial meltdown! Print journalists may soon have to send their kids to public schools, feed dry food to their cats and give up their leases on Prius automobiles and get the Hummers that are being offered at such deep discounts these days.

The print journalism industry is taking a beating, circling the drain, running on fumes. Especially running on fumes. You could smell Frank Rich all the way to Nome when Sarah Palin was nominated. Not that print journalism actually emits much in the way of greenhouse gases. We have an itty-bitty carbon footprint. We're earth-friendly. The press run of an average big-city daily newspaper can be made from one tree. Compare that to the global warming hot air produced by talk radio, cable television and Andrew Sullivan.

There are many compelling reasons to save America's print journalism. And I'll think of some while the waiter brings me another drink. In the first place, one out of three American households is dependent on print journalism. And if you think home foreclosures are disruptive to American society, imagine what would happen if USA Today stopped publishing. Lose your home and you become homeless: a member of an important interest group with many respected advocates and a powerful political lobbying arm. But lose your newspaper and what are you going to do for covers on a cold night while you're sleeping on a park bench? Try blanketing yourself with Matt Drudge to keep warm.

Reckon ya'll knows The Chicago Trib is is in bankruptcy? No wonder, since they's a leprosy that's eaten at the truth until the truth ain't recognizable in they hallways no more. An' now, who's shocked that fewer Americans git their daily news fix via newspapers, specially the Gen-X-Y's? Seems the fourth estate was the last to git the news . Oh the paper boys an' girls raged about the untrustworthniess of the Pajamas Media, them thousands of upstart online "scum mongers" whose sources ya' cain't trust...how thar' was no editorial oversight fer unshaven unshod onliners --oh yeah, them print news hegemonists said all that while givin' Pulitzers to plagiarists! The New Yawk Times has less credibility than the Auto Trader.

When an industry doan police itself, it is rots from within.

Same is so fer a nation.
Posted by Aunty Belle at 4:55 AM

Labels: death of print, rot within

A guy with the gambling sickness loses his shirt every night in a poker game. His buddy tells him that the game is crooked, rigged to send him to the poorhouse. And he says, haggardly, ''I know, I know. But it's the only game in town.''

I left newspapers behind a long time ago. It grew tiresome reading the same stuff in different AP/UPI papers and most of it about two days older than the news on the web.

Good riddance to the current crop of newspaper owners who are overwhelmingly lackeys of the traitor-democrat-party-of-filth.

The one owned by the New York Slimes Company is actually the more moderate of the two, believe it or not. The other one makes NBC look fair-and-balanced.

Aunty Belle,
I doan think Mr. Paulson is a gonna be listening to ya. Lots of folks I know have quit taking their papers not cause they don't believe in the importance of the print media but because what they's printin is fine for lining bird cages but not so fine for folks wanting what a paper should be.

Reckon this is just another tragedy of our rapidly disappearing culture.

Those park bench folks is getting creative. Saw on the news yesterday where some homeless folks is now homesteading in forclosed Fannie and Freddie residences. The position is they's got as much right to em as any other American!
Least ways they not on the benches looking for a little newspaper cover!

It's about economics.
The lies are only part of the problem. The real problem is that people are not willing to pay for lies to be printed on paper and dropped on their doorstep when they can get all they want off the Internet.
Sort of like not buying bottled water cause you can just turn on the tap.

My local paper is merely a patchwork quilt of things taken off the AP wire service - they have cut their actual LOCAL writers and I cancelled the paper years ago. Plus, we are a two newspaper town, but both papers are owned by the same company. ??????

print journalism is a bailout i support. i need paper to shit on.

ya got my sympathy, but then we's gota Trib paper--gack! Turned it off years ago.

them homeless is creative! Homesteaders indeed.

howdy, an welcome. Lies is the first problem, all the rest is a vortex. Whaddya 'spect when ya know who the father of lies is?


thas' pure-T collusion. Dip the paper in vinegar an use it fer cleanin' windows--light the light in.

our local newspaper keeps me informed on local family reunions, church suppers, boy scout chicken ques, the high school sports teams, who's on the A honor roll, who married who, the christmas parade, who turned over in the ditch over yonder and needed to be helicoptered out .. that's news, ain't it?
it's just a small family run newspaper. i'd hate for them to go out of business. the owner is our cub scout leader ..
and that's the only reason i get this newspaper. i get no other.

Our big Chicago owned rag woan run no news like that. They jes' ahave announcements--the name of who pulled a marriage license.

Iffin' newspapers went back to bein ' local services then I bet they would survive. It's when the big conglomerates decided to mold the people into what big boys wanted, when the locals were shoved out, when the idea of civic pride gave way to national murder and mayhem, well then, it was jes' a matter of time.

In other weighty news, YOU won the Troll Points contest!

Aw, Troll, is ya tryin' to make sure I ain't feelin' left out over the RR thang?

Interesting take on this industry. Are you saying that the newspaper industry has had a sparkling reputation up until recently? That muckracking and yellow journalism never existed before 20 years ago?
The problems that the industry seems to be having is one of revenue. When the money you made from classifieds dries up because of free services like Craig's List, that's a problem. When your readers can download grocery store coupons from the internet instead of buying the paper for the store flyers, that's a problem. When you can get scores for sports events, stock info, voting results, almost everything quicker than buying and reading a newspaper that issues once a day, it's very hard to convince your advertisers that the ad rate you are charging them is worth the effort.
Until the industry figures out a way to capture the revenue they are losing on their hard copies in their soft versions, they are in for some very hard time.

Yep, I knows that muckrakin' was rife at the turn of the century. But thar was a time after WWI when journalism became a trust, a profession not unlike a doctor --an' some doc was quacks.

Also, more papers were local endeavors--more community spirited cause they was from and part of the community. No longer. An' the big city boys think nuthin' of stompin' the local community to wormfood so they can attempt to build a new assemblage over that ground.

The tippin' point, in mah view, is when editors knowingly hire an' promote folks they know are frauds. Thar's a reason *liars* is in a lower part of Dante's Inferno than thieves.