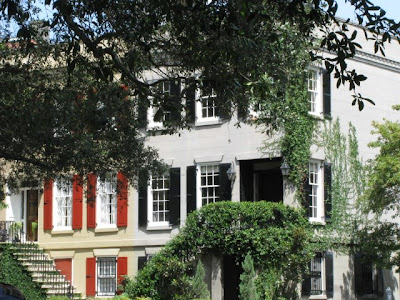 On the Way up to the Birthday Bash  me and Uncle stopped the night in Savannah Georgia. Ya'll this is a lovely old colonial city, laid out by Englishmen to be folks-friendly.

Georgia is one of the first 13 Colonies--a proud history. English "second sons" is the founders of this gracious moss draped reverie. 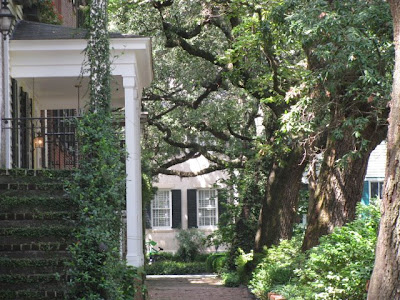 It done had its share of modern malaise but its bones is still good. The city is arranged around 28 squares as hubs fer lovely old homes and churches, an' ya enjoy a sense of gentle discourse between city and nature. 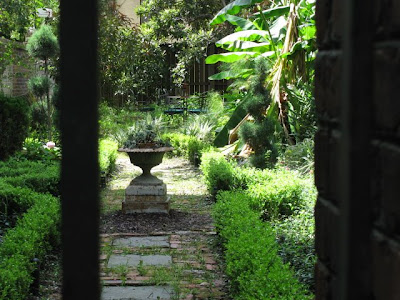 Me an Uncle strolled the streets en route to a tucked away paper gallery I knows of--needin' to find some birthday treasures fer my Sister. We poked our nose through gates of tiny alleys and courtyards. 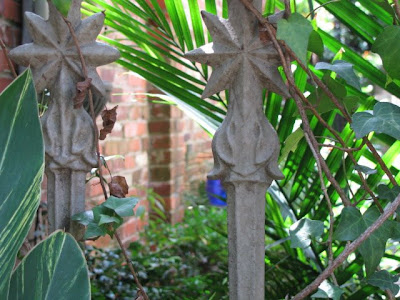 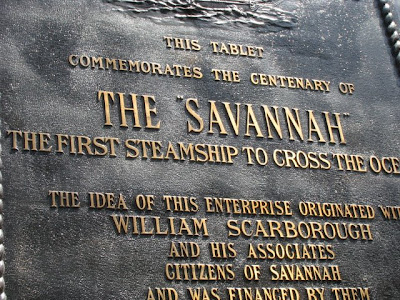 Savannah is justly proud of its history. There is a Revolutionary War battleground heah, some nifty old forts on the River. 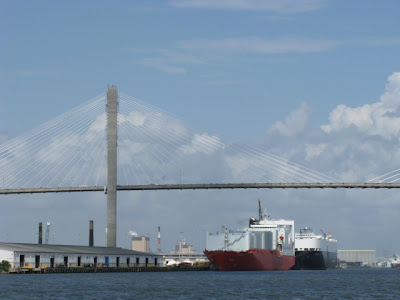 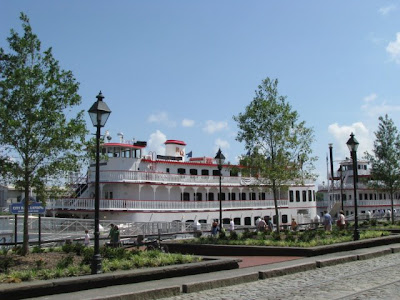 
Ya' cain't hep but admire these old buildin's that was made of the stone that served as ballast in the first ships that brought settlers...

Along the riverfront we had a mediocre tourist version of crab Benedict fer a late breakfast, then strolled up to street level past ancient bays of the factor walk (factors is middlemen--they give ya cash fer 70 % of your transported goods so ya can turn yore boat around and head home...then they make the spread when yore stuff is sold locally) 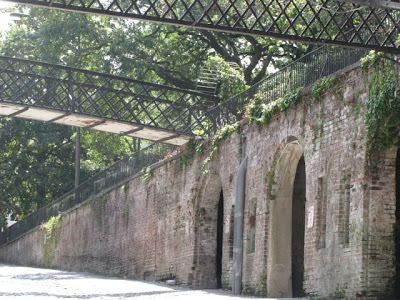 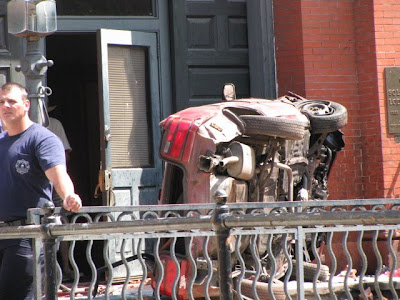 Ten at street level, Mercy! Seems a girl was still in her cups and drove down the main river road doin' 70 mph! Well...ya know where that landed her? In the front of th Cotton Exchange after goin' airborne fer 100 ft!

Yes, she survived....must a been a very fortuitous weekend folks--drunks and plunging balloonists survived.

reckon somethin' had to be sacrificed, though. The ancient lion fountain in front of the Cotton Exchange is now decapitated. 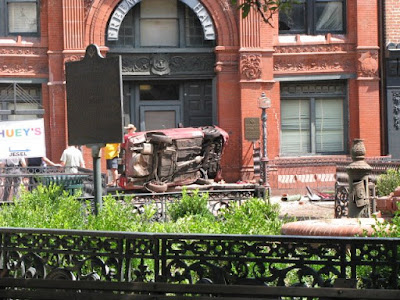 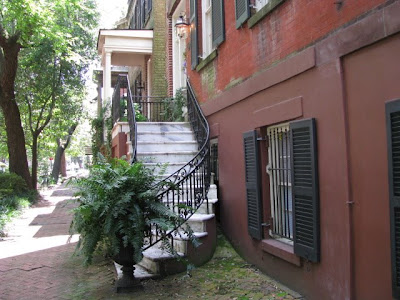 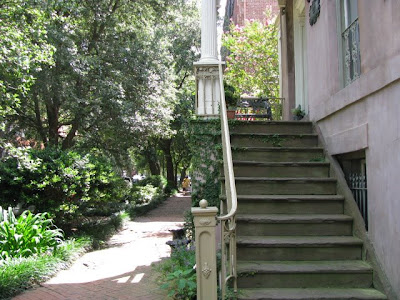 What I 'specially appreciated about this Old Lady is that it is a city that ain't over gussied up. Livin' near to Disney, I reckon I'se mighty tired of the "Disney effect", that pat, canned look of storybook perfection. Nope, Savannah has a torn petticoat or two, but she looks real, not like a museum set piece of a long ago city.
Posted by Aunty Belle at 7:43 AM

My Grandmother loved Savannah and it's on my list of places I MUST visit in the next few years - they did a great job in preserving their old homes and not letting new condos/etc., ruin it's beauty and history. It almost looks European? Or is that just me coming from the very "new" Pacific Northwest? Have a great weekend, Auntie. Are you finished with your deadline? Can you kick back and enjoy for a bit? xoxo.

Savannah is so beautiful.
I'd love to be set loose there with a camera for a couple of months.

I spose I'm too late, sakes alive.
For'th' lim'ricks contestin' jive.
Though we don't see eye to eye
('zit the politics? oh me oh my...
No. It's cause you're petite and I'm near six foot five.

But, just so y'know, I still use it
heard it important t'not abuse it.
The book marker, I'm saying young miss
What'de you think? Oh my goodness!
Well, once you're reading, y'just don't want to quit.

A suggestion, for wherever you are
(don't take to smoking a cigar)
yeah, that's right, but not it
more important, do not sit
next to a woman driving that fast in her car.

I hope to see Georgia again mainly
T'taste fresh, sweet peaches, many.
We have those up here, it's true
and even magnolias, too.
But, the thing is I was born in Albany.

I spose it's not near the likes of Savannah
what, all gussied up and ladeedadah
but, having been all around
The truth is, I've found
The smallest towns are like Shangrilla.
Shangorilla?
Shangoria?
Dang! Got really far, and it all went to pieces in the end....

Oh well.
Good as reason as any to stick to painting.

Anon Boxer-Babe! I IS FINISHED!! WoooHooo! Yore granny loved Savannah? Well, she done had real good taste.C'mon down to Georgia--I'll drive up and meet ya! We'll git the She Puppy to come join us too...oooh! Savannah will never be the same agin'. Heh.

Iamnot, aw, Honey, youse a displaced person, I heers it in yore "voice". Your camera will be in ecstasy. One of ya should be.
Thanky fer yore back porch visit.


Boney, youse a poet and ya even know it. I'll add yores in to the mix--and I'se real pleased that Venetian bauble still marks yore pages.

Wonderful post, Aunty! Savannah is such a lovely place. I had the privilege of staying there for a few weeks during a negotiation - the people were friendly, the homes were beautiful, and the food was excellent. (I still have some on my hips to prove it!)

Of all the places I would love to visit in America, the old south is top of my list. I love all the gracious buildings, and the pure romance of the place.

Lovely pics Aunty and I thank you for sharing such a beautiful place.

Hope you and Uncle have a great weekend.

My Granmother was a true Southerner... born and raised and never let any of us forget it.

You know what? I just may pull out some miles and meet you all in Savannah. Why not? :-)

What are the best months to visit?

To me, it's a night-and-day place. Those same places have filthy criminal welfare-freaks wandering around them at night.

savannah is lovely. i love me a city that is walkable, rich in history and where the beauty of subtle decay is appreciated.

Java J!!
Hey hey...well, the food is worth the embellished hips. I done savored --get ready--a smoked chicken pear and brie biegnet. Need I say more?

Gypsy-Lady,
come come!! These is some good places to see: Savannah, Beaufort, Charleston, St.Augustine, the old part of Mobile, Natchez, Charlottesville Virginia (and both Monticello and Mt. Vernon in Virginia) The Blue Ridge mountain villages...oh dear...now I'se workin' up some first rate wanderlust.

Anon Boxer-Babe, Sweetie, c'mon on down!! Late October is lovely, and April gardens is glorious, but touristized. I knows a pair that goes in march when thangs is in bud, but fewer tourists. Onliest tough time for a PNW girl is summer--sticky heat ain't yore forte. Yore G-Mama Rocks!

Troll-stud,
Pudin' that is sorta true, I admits. I ain't gonna walk after dark wif'out Uncle or a few lady friends...But, Whar I stay, they's not a problem-- Jes doan go to the waterfront late night.

Foamy!!
Sweet Pea, can I tell ya, that since I'se in "subtle decay" meself, that might be why I groove wif Savannah??? And it is oh-so-walkable.

I have a friend that lives in Savannah. I have never been to the city but looking at your pictures makes me think of him and how far we live from each other.

Forget spain. It looks like it's time to come back home...

I looked on the back porch Aunty. Shame on you.

A baalloonist soard very high in the sky,
Then suddenly streamed toward Earth to die!
"Oh no! Can't be!", our Aunty cried,
"I will catch him", an angel replied,
"Can't let this happen before Belle's eye!


Belle's got herself a new coppery kitchen,
Now all can stop their infernal bitchin.
That Wishy was proud
He said so aloud
Now Aunty's back fixin the chicken!


Mute Monday's assignment was 'zest'
Our fun weekly wordy contest,
With pictures of lemons and soaps,
Our players presented their hopes,
But our Belle's was the best of the rest!

What can I say that hasn't already been said? One of the highlights of the southron tour. And now you've got me yearnin' for a visit to Cha'lston. Been way too long.

I looked on the back porch too Aunty, Bravo!

I lived on Tybee Island and worked on Cockspur Island (Fort Pulaski) for 3 years from '84 to '87.
Loved it. Coming from the MUCH older colonial city of St. Augustine, Savannah had enough old charm to feel like home.
She had her dingy parts too though ... I always said she was like a pretty hooker ... lovely on the surface in good light, but on the inside ...
My first baby was born there and Savannah will always be a special place ... even with a few flaws.

Tell me Aunty, have you eaten at Paula Deen's Lady and Sons? I have only been to Atlanta and am longing to go to Savanah! There is nothing this Yankee girl loves more than the richness of the south in the warm months...those flowers and foliage are mezmerizing.