Hot Air (Balloons, that is) 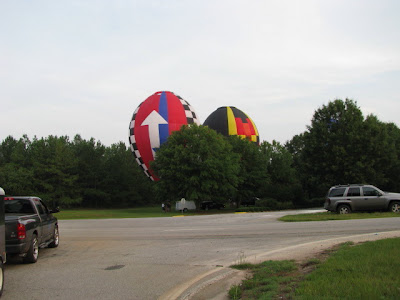 Mah deadlines was met, so Uncle and me high-tailed it up the road to South Caroliny fer a family festivity--

ya'll, I have so much to share--hoo! Blog fodder fer a few weeks! Stay tuned...

An' this heah is the first one: Hot Air Balloonin'!


Nuthin' more childhood magical than to drive along the road and see these elephantine bubbles float up over the tree line!

One of mah sisters is a balloon groupie. When the balloon brigades show up in her town, she dances aroun' like a little kid on Christmas morn. Sometimes she hep's crew. Ain't sure, but I think it means set up, take down, ride in ground chasin' vehicle and yell into the walkie-talkies, cal -koo-late on the GPS--all that stuff.

Well, nuthin' would do but she had to go "up up and away" and up she done went! (Thanky to her hubby who arranged fer her Birthday to begin wif' a sky-ride.) 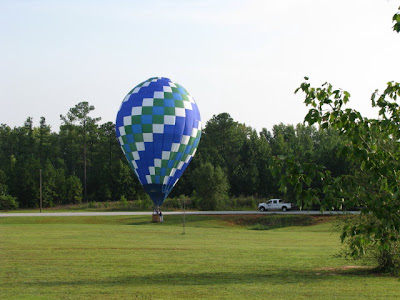 So we head out to the edge of town and thar' was a colorful parade of Gulliver's biggest eggs! Cain't say fer sure, but seemed at least a hunnert (100) ballooners turned out fer the festival. They's all racin' around the county tryin' to find the best launch spot--

pull in a dirt lane only to find some fella beat ya' to the spot, roar out again an' consult the GPS, some wind info--ain't tellin' what all they's trackin' til they finally choose they spot...then, 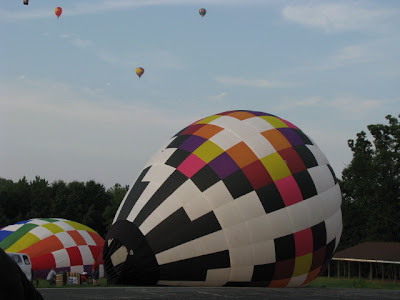 We watched folks git set up .....blowin' hot air in this thang is man and girl work... 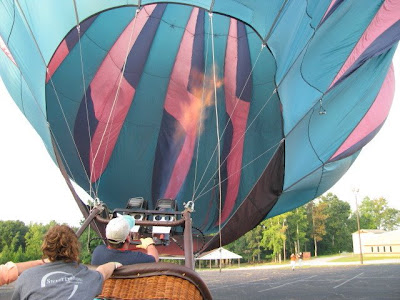 Ain't easy, folks--this heah was a competition and the game means ya have to be airborne by 8 am or youse disqualified. It's is a frantic set up!

Somehow, this whole rig is unloaded, unfurled and airborne in about 10 minutes! 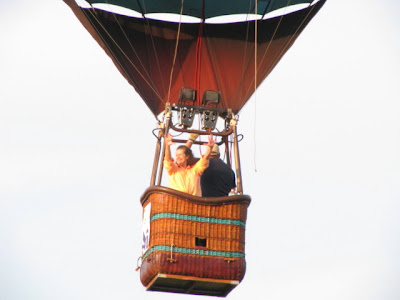 Keep an eye on the pink and turquoisey-green one what mah sis' is ridin' (Classier than a broomstick, I will say! jes' kiddin'!) 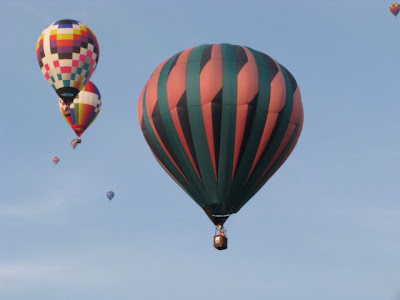 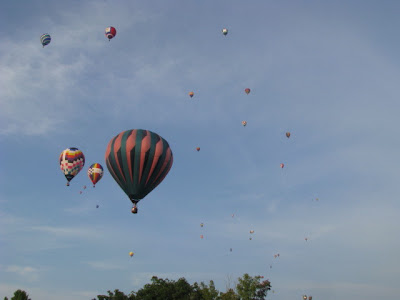 When dozens of these beauties start polka-dottin' the sky, it is pure fantasy!! 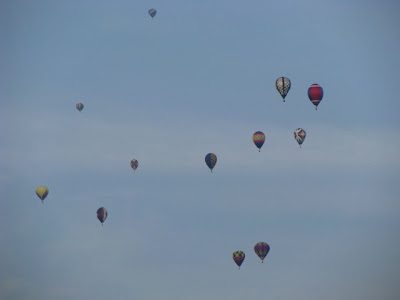 We bumped and banged over ditch and dale, racin' along below...a merry chase we made fer nigh on 20 minutes...


But ya'll...oh dear...I looked out the window of the vehicle, off to mah right in the distance, and seen what I thought was a giant kite tail fallin' toward earth..but Uncle say, "Oh NO! Oh my God! That's a collapsed balloon thas' fallin'!!

It whirled through air gyratin' and spinnin' its colors like a top..for an eternity. We raced on, found to a place to pull off to the side and check wif' others--"

Anybody heard any chatter on the radios? Has ya'll seen a balloon fall? "

Naw, folks said, them balloons is safe and doan fall...an' then we heard the sirens...mah heart was heavy.

Next we heard the squawk of our own balloon's radio--they's comin' down, come pick 'em up...
Yes, a balloon had fallen, the competition was canceled. 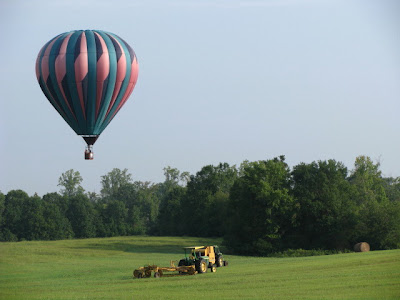 
While we packed up the balloon, radios began to pop and crackle with the news that the fella had survived!! Caught in the arms of an oak tree, he was bein' airlifted to the hospital...

Sis went off to a meetin' about what had happened. Never knowed the air safety transportation folks monitored balloon stuff...but some official like thang went down all afternoon...

and the good news is that the balloonist, sucked into a wind shear at 6-7000 feet, was reported to be well enough to flirt wif the nurses....heh heh... A fractured pelvis and a jagged broken spear of tree trunk through his thigh never stopped a good ole boy.

The story is passin' 'round that a sweet ole lady sittin' on her porch lookin up at the lovely balloony mornin' seen the horror fallin' toward her...she buried her face in her hands and said, "Lord! Youse gotta ketch dat boy 'cause how's I gonna live if I see this thang what's happenin'??"
Posted by Aunty Belle at 9:44 AM

jes' a note: The limerick winner will be announced on Sunday--so ya'll can vote iffin' ya want to...

Wow! Great pics Aunty, ... Very glad Sis made it back to Terra Firma okay and that the faller feller is gonna heal.

Great post, Aunty! Glad your sister is safe and sound!

Labor Day weekend is celebrated with an annual "Balloon Classic" here in the Springs. My hubby loves going to the take off point for the evening "glow", when all of the balloons fire up and hover just off the ground, but I'm more of an early morning takeoff fan - I love to see the sky filled with those fantastic things!!

We got to go to the big balloon rally in Albuquerque. That was spectacular. We have some balloonists out here as well, but they have to fly early morning or late evening because of the day time heat.

Boy howdy! Thank God for a prayin' granny-woman! I love watchin' them thangs from terra firma, but I's a big ol' chicken come time to jump in and lift off. I used to know a balloon man who tried to get me to ride, but I kept both feet on the groun'.

What part of SC did you visit? I have family up there, as well.

Aren't they just beautiful? I don't think I would have the courage to go up in one of those things. I think I would like to have a bit more between me and mother earth than a wicker basket but it sure does look like fun for the courageous and young at heart.

I'm so pleased your sister made it back down safe and sound and that the poor fella who plummeted to earth will live to fly another day.

Wonderful pics Aunty and thanks for sharing.

You should visit for the Albuquerque International Balloon Fiesta sometime. It's a party. My favorite events are the nighttime balloon glows. But you know, being up IN one is weirdly anti-climactic.

My healthy fear of heights make me dizzy just looking at these - but there is something so beautiful and colorful about hot air balloons. I love pictures of them however.

balloons are beautiful ..
i don't think i'd ever do it though..
fear of heights, i might puke over the side of the balloon due to air sickness, fear of falling ......
and theere might not be a granny to pray for me.
i'm glad the balloonist survived ..
whew!
what a blessing.

i saw that balloon collapse on tv! you SAW that???!! crazy. very nice photos too. no chance for you to go up up and away?

better than a broomstick? grrrrrrrherhahaha

I liked the ending a lot. Even if it's apocra..apocry...

Even if it's not entirely true.

FOlks--I'se pantin'...jes a lot to ketch up on, ya know? So, ain't been bloggin' like regular--so so sorry.

Java J!! I wanna see one of them evein' glow thangs--heered it was amazin'.

Phos G Kid, does ya do the rally yoreself? Go up in them big bubbles?

Hey Sophie Mae! Why, we went to the upcountry, not fer from Greenville...yours ?

Gypsy Lady!! I'se pleased to see yo' out bloggin'! They's purty, but oh my! I'se been up once't--over Napa in a big big one, but that'll do it fer me, after seein' this event--I'se jittery bout it now, fer shure.

Hey AnonBoxer Babe. Reckon it is a spectator sport fer folks wif vertigo. You and GYpsy and Foamy and me can be the chase team, huh?

Thursday Next, Sweet Pea, how ya been?? it do look fun--but I'se a feared of it now--is ya the adventuresome type?


Foamy!! Oh honey Chile...you cannot imagine the collective relief when that fella was found alive and conscious. But doan worry, Sugar, a granny would certainly be theah, praying fer some wings under ya',

K9, ya seen it on TV?? No kiddin'? Wow. The news made it to the metropolis of hot-lanta? Yep, darlin' I did akshully, truly see it as it happened. Broomstick--like that? heh.

Troll-Stud, yes, that story ain't no figment of Aunty's fertile cerebrum, thou it might be apocryphal in the balloon community. But given the location of the landing, it seems real real likely.

Onc't we had a heck of a blow round heah...and a big tree, that is, a BIG TREE, started cracking and Aunty holler out, Lord, let an angel catch it!!

That tree was laid down in the ONLY spot it could be that din't crash a home or cars or dog yard, or...

Course, since I seen two angels, that I know of, in mah life, I ain't surprised the tree was caught.

(no, folks, no wings--them beings looked exactly like mr. average man. Thang is, one appeared where no man had been or could be, the other left in a way no man could depart--both snatched Aunty out of some foolishness she got her
derriere into.)

Aunty, you are some adventuresome lady! Heard today that fallen baloon feller got jetted to a hospital in Michigan where his home folks can visit him regular.

Read where the reports is he was flying along in his bubble @ 7500 feet and then what probably is gonna be "discovered" to have been a terrible wind shear took that balloon to 9000 feet and ripped the crown plum out of the balloon causing it to stream on down to the catcher tree.

Really blessed thing there were some good grannies around to say some serious prayers! I'm guessing all those other balloonists in the sky was praying mighty hard too!