Why be polite? It is the Politcal Season 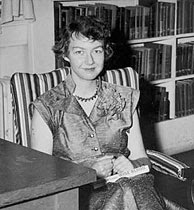 Mayhap I've mentioned that one of mah favorite writers is Flannery O'Connor.

She wrote the dern'dest short stories ya ever will read. You'll laugh out loud, an' you'll be shocked. Some called her the master of the grotesque. She wrote up some amazin' characters--mostly drawn from the South.

One funny but serious story is called Good Country People. The story revolves around a lonely young woman who sneers at her country mama and mama's friends. He mama named her Joy, but after gettin' a Ph.D in nihilistic philosophy she renamed herself "Hulga" --about as ugly and hopeless a name as I'se ever heered. Hulga has a wooden leg that she sees as her most precious part.

Along comes the travelin' bible salesman, a Mr. Manly Pointer (Tole ya the stories is hilarious) who is goin' to , ah, point a few thangs out to this smug woman who puts on airs about her atheistic erudition. She ain't what she claims, and neither is he....but I won't spoil the story fer ya'....jes' a warm up to make a point on manners.

Flannry O'Connor wrote during the 1960s (early death from Lupus) when the Civil Rights thang was gatherin' steam. She noted that the relations a'tween Black and Whites would be okay as long as we all kept our good manners--an' mostly she were right: More riots and trouble in the North than the South over integration.

Flannery thought the formality of manners acted as a mediator--a buffer if ya will, for those times when tempers is high.

Well, tempers is about to fly, ain't it? I mean, here we go into the election season, campaign season, political season.

I reckon ever'body goin' to have strong opinions--I will. (Obama is a Marxist, pure and simple.)
All I'se suggestin' is that we remember to be polite about itl-ya know? The person who thinks different from you is still a person that ya might like on other matters.

Mostly the Front Porch ain't fer sluggin' thangs out--thas round on the BACK Porch. But it ain't never amiss to remind meself that I can say strong thangs about the situation wif'out forgettin' to be mannerly.
Posted by Aunty Belle at 10:19 AM

Great sentiment and so very timely.

soooooo,
how's the weather down yonder these days .. ?

Hey AB! Alrighty, I knows youse up in Obama territory, so doan worrY none when ya come here--I'se determined to be mannerly.

Ain'ty ya glad to be out from under that big rush job?? Whew!

Foamy Lady,Heh..okaaaay, I reckon I'se pep talkin' meself most of all. We CAN yak about mor'n the weather--it's jes' that Aunty can git herself in a swivet iffin' I ain't mindin' meself.

I love all my Demochromatic friends. I hug them and squeeze them and call them George.

Recipe contest at the Troll Report today. Should be right up your alley, Aunty. Bout 90% of the eaters be Southern.
And the other 10% need educating.

I do love that story. I've read everything by Flannery. Even her letters.

I see that Hillary's 18 million folks is hornet mad. Others demand she be Veep--doan know iffin' the Dems oughta do that..

Troll--I took one of mah best receipts over to ya!

Hey EOR!! How ya' be, my Sugar Pie? Flannery is the all time favorite--Her letters is even better. She is one fer layin' it out, ain't she?

I ackshully made a pilgrimage to Milledgeville, looked at the books and her desk in the wee college library--I hoped to get some of her by osmosis. Great to see ya!

The Great State of Washington does love their trees and liberals, and that's why I'm a lonely Liberterian. It's a good thing I have "Moi" as my candidate!

Well I'm glad I can be kept out of the polliticking of your fine country and don't worry Aunty, I always mind my manners.

I'm thinking Obama needs to pick Bill Richardson for Veep. One, he has the fern policy experience. Two, it will get him the hell outta Nuevo Mexico.

LOL at AB. You, Moi, and a few others, rattling around the country like a bunch of pinballs with nothing to ping.

Libertarians? I can almost go wif that --some hitches.

Gypsy, Sugar Plum, youse got some of the best manners of all. Ya gives all the benefit of the doubt.

Yep Moi, Richardson would be the choice to shore up Nobama's geographically challenged fern policy. Heh.

But lemme say right out--I ain't excited about McCain. He is the lesser of the evils.

I understand so well Aunty,

Seems most people I come across with where I live needs some serious reminders about "manners," I don't think most know the meaning of that word anymore. I dunno'..I was brought up to make sure I show the politest side of me towards anyone..and it repels me absolutely when people are just so impolite...vain impolite..like anyone can just prattle on about anyone in such an unkind manner..I mean everyone seems to have lost manners..politicians..tv people..even the car salesman..