I'se supposed to be organizin' photos of a trip Uncle an me took three years ago. I ain't got a clue whar' them pics is, he seen 'em once, thas' enough. They's in closet somehwar...Lord knows whar.

But while we wuz on the topic of trip photos Uncle as't if I could find them photos of a visit to the Tower of London whar' we seen the forerunners of the coming Punk-Goth fashion--them 20 somethin's wif' the stegosaurus hair. Now this were in the century back, so weird hair was still weird.

We's roamin' around in the Tower precincts, and thar' were a gaggle of young men and women in all black, wif' silver shackles locked round they ankles and khol around they eyes, boys and girls in high heel boots. That were noticeable enough but it were the hair that dropped our jaws.

"What are you starin' at, American Man?" demanded a zitty faced tough. 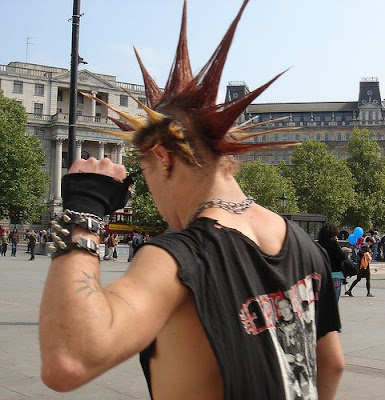 Uncle replied, "Now son, I didn't want ya' to be disappointed none, so I'se lookin' ya over real good. I reckon you got yoreself all rigged up like that so people WOULD stare at ya. Reckon ya' want attention, or ya wouldn't subject yoreself to all that pain and effort. So, here's me lookin' at ya'."

No kiddin' folks, this poor lost chile had growed his hair out a foot long , then parted it in sections from his forehead down to th nape of his neck, shaved bald on the sides. Each section was drawn up like a pointed spike that he had used super-glue to stiffen, such that he had a row of six, foot long spikes growin' out of the top of his head, then, fer embellishment, he done sprayed each spike a different color of the rainbow. He looked fer all the world like an abused stegosaurus.

A few more words was exchanged between Uncle and the Punk-Boy, then a flock of ravens flew down to perch on the parapet. I knowed right then it was an omen of thangs to come. 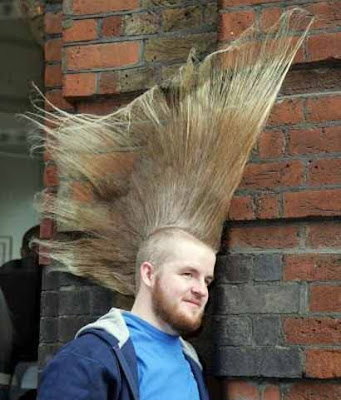 We's "progressed" now an' kids cut and tattoo and pierce every orifice, so ain't much that shocks no more.

Except Granny. Last year Granny were in the hospital fer a spell and the nurses on her floor organized an ice cream social fer residents. One of the nurses aides has a creative hair job, so while I'se wheeling Granny into the social room we's laughin' over this ole' story about the weird hair at the Tower of London. She say it reminds her of a joke a fella in rehab told her.

By now we's at a table with cups of nasty Pepto-Bismal lookin' strawberry ice-milk (no cream fer heart patients) and Granny launches into her joke, wif' me smilin' on, not knowin' a thang of what is comin'.


Granny tells a finetale and she led up real good until all them ole codgers in bathrobes was leant forward.

"So while the ole' man sat peaceably on his park bench feedin' the pigeons, mindin' his own bidness, along came this passel of younguns wif' the overalls down round the knees, they behinds bare to half crack, ragged vampire tee-shirts and hair dyed neon green an' purple an' oranch. Natcherly, the ole man is starin' at this spectacle."

I tap her gently on the arm, but she shakes me off...she doan want no warnin' from me...I knew she wuz goin' ter embarrass me.

"So this heah one boy detatchs hisself from the passel and comes over to give the ole fella a scare. The boy barks, 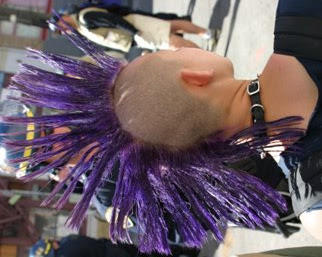 
Now the ole boy jes' keeps lookin' the kid over an he finally said, "Yore hair is blue and green"

That boy guffawed loud fer his buddies an' gave the poor pigeon man a shove against his shoulder,

"Yeah Pops, din't ya' ever do nuthin' wild when you wuz young?"

Well, I have to tell ya, there was a time in Moi's youth when I had a similar hairstyle. No lie. Only it was pink, and not nearly so high. I mean, one has to get though doorways, right?

i don't necessarily mind the look..
i mind the rudeness that at times comes with it..
although rudeness can come from anywhere.
and i can't imagine the vanity and time that goes into trying to look anti establishment..

Ass-crack pants are a misdemeanor on Troll Island. And, yes, it's enforced.

Ain't THAT old, but mercy, I like to look at them films from the 50s, whar' people dressed fine...not fer everyday, but dern folks, the slovenly style we have now????

oh, i did focus on the joke, aunty..
but, alas, my mind was in the gutter..
those thoughts were not worthy of your comment box ..
lol