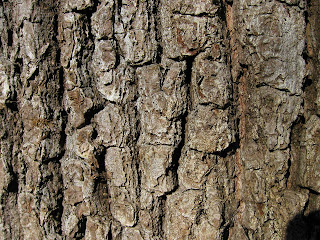 Now this is what happened jes' this mornin' (Saturday) (I attest here an now ever word of this is true!)

Uncle done found a new digital camera under the tree from Santy Claus. But as he ain't no techno wizard, he's jes' now gettin' the hang of it, and I'se sure sorry that he is...roams around takin' shots of breakfast, tree bark and woodwork.

He wandered up heah to mah cubbyhole to show me what he learnt, and I was chucklin' over some of ya'll in the combox . Natcherly, he made me read what I done wrote about him. He thought all ya'll oughta be real impressed wif' his words.

But he has his doubts. he tole me how yesterd'y he said to his secketary that half the folks in the buildin' ain't got nuthin' ter say at a meetin' they had, all them folks did was to prattle on and on.

Then, Uncle tole me, he went in his office and started ter worry if "prattle" was a real word or an Uncle word. So he looked in the dictionary but could not find it. Thinkin' that the problem was his abridged desk version of the dictionary he decided to look again this mornin' in the home dictionary(s). 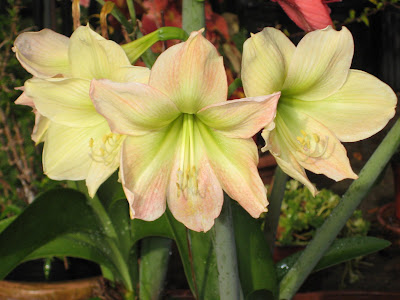 "Belle, dang it! I KNOWED that it's a word...but looky, they took it out of the dicshunary. Is that cause it is old-fashioned?"

Naw, I said, it ain't too old fashioned.(Uncle doan know nuthin' 'bout refrigerators, he still calls it an "ice -box" and the fella at the airport what shines shoes is a "boot-black"

[yeah, yeah--even if he is Chinese he is called a "boot-black"] and he takes his own boots to a "cobbler" an' he ain't even made it up to "stereo" much less jam box, Ipod or Itunes, jes' a "record player," which is up from a "Victrola.")

"Well, then why ain't 'prattle' in the dicshunary? " he demanded.

Knowin' it'd be fodder fer this blog, I slyly asked him,

I snickered at the poor soul: That's why ya cain't find it--because "bird-day" ain't the day youse born and yore sister cain't "freeze to debt."

Does ya'll ever wonder iffin' folks have trouble gettin' along on account of they cain't even speak the King's English, or find the right words to mirror what they mean?

This heah is a true-ish exchange 'tween Uncle and another fella:

" 'Bout the same. Will ya take some lemonade? Aunty makes it fresh."

"Naw, uh, I cain't git home wif'out dumpin' on the floorboards, but I reckon thas' right nice of ya'."

"Well, Roy, it's jes' a manner of speakin', ain't thinkin' of no subversion."

"Sub version? Who you callin' a subversion? I'se a fuller version than you is!"

"Naw, Roy, youse a subvert againt me fer sure--looky, I'se a half a haid taller, so, that makes you sub-vertical to me."

After while I heered the porch door slam and Uncle came slouchin' into the kitchen, his lip all poked out.

I said, "Seems smart enough to me. He makes a go of that cycle shop of his'n's"

Me: "That ain't what witless means, Aloysius. "

"Well, since I'se the one speakin', thas' what I means it means. But Roy got so mad at my
funnin' wif' him he hauled outa heah as white as a sheep."

"Doan talk dirty, Belle, it ain't fittin' fer a lady. Even if Roi were rude sonofogun."

" Mah phrase is 'sheep'. But it doan matter none cause when ya git in a thang like this, there jes' ain't no way to equify it."

"Yeah. Ya know, make thangs equal again, when ya' try to justify what ya done or said."

I blame it on TV.

Not for any particular reason...I just enjoy blaming things on TV.

FOAM
so glad ya' had a chuckle! Thang is, it dern near the word fer word truth of a real exchange.

Anonyomus Boxer
....no, not rap, jes' normal Uncle speak. (them back posts show how Uncle is a character unto hisself!) but I'd love to see ya turn it into one---teach us how to Rap!!

Other than prompting a good laugh, this story also made me curious: Aunty scribbles for a living. What does Uncle do?

Moi? What do Uncle do? Why darlin' he is a PORK RIND MAGNATE. Ho-owwwwll!

(akshully, puddin', Uncle is bidnessman-- He ain't no doc or lawyer or acccounternant, just a poor ole fella out thar scratchin' in the dirt tryin' ter make somethin' happen)

Uncle done tole me how I was impugnin' his image wif' tell all ya'll these stories on him.

I tole him--git yore own blog, and pay me back. (I'se safe, he doan even know how to open a browser.)

i love that word magnate. it sounds really gud with a suthern drawl

Oh Aunty, now I'm laughing at your exchange with Moi. You know I'm an aussie and we speak a whole other version of English over here. I'm always having to explain myself on my blog because people don't understand me.

She, ho! Funny enough, Uncle always says "maggot" --as in "I'd have me a quail huntin' lodge too, iffin' my grandpappy had been a rich railroad maggot like Le Roi's."

Gypsy, hey hey! Talk to me in Aussie, Honey Chile'! Yep, we folks wif' a fun dialects have an edge on plain speakers, ain't we?

Man, Yankee words are not as near as intersting as southern ones with drawl...