NOW CAN YOU SEE the Fish? 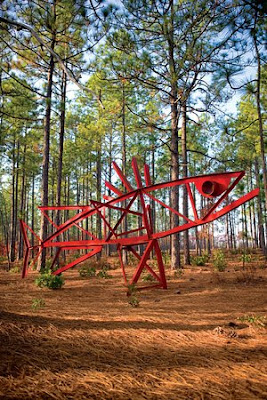 ( UPDATE: Reloaded the fish photo--Can ya see it Troll? AnonBoxer?)

"The absolute worst review of my last book appeared in some rag from Columbia, South Carolina, so I drove down with a dark view of the entire town. But Columbia is actually all right; in fact, I’d say it’s a museum-quality midsized Southern city. It boasts a funky art scene, a statue to the Confederacy, euphemistically named bars such as the Wild Hare and Chubby’s and Big Slicks and Uncle Louie’s and Sneakers, some without windows to see into or out of, a ton of churches, beautiful women, more bars, a river, a football team that comes with its own university, an ancient abandoned redbrick building all beaten down and falling apart right around the corner from a state-of-the-art something-or-other, a couple more churches, dogs, a foreign car manufacturing plant, trailer parks and antebellum mansions, and it’s also the home of the artist..."

Uncle went to bed early tonight. I found him a new magazine--one we could both enjoy. It's about "21st Century Southern America." Garden and Gun.

Ya'll thought we din't have no culture??

Who is the quote from?
I'm lost.

That quote is from an article in the mag--about going' to visit the fish artist--Mebbe I ought put in a link.

Anyhow--I jes' though ya'll get a kick outa this fish sculpture in the piney woods!!

An of course--show that they do be some culture round heah...smile.

Thinkin' on it. Mayhap I'll be puttin' all ya'll in a work of amusin' bloggers I have known.

Awesome. I'm going to scramble off now and subscribe.

So, Aunty, is your bookwork perhaps Southern Gothic Bodice Ripper Romances? Cookbooks? How to Talk to Democrats and Still Serve them Pie with a Smile Afterward?

No Moi, alas....no. Aunty ain't got no fiction--no bodice ripper credits--drat! I need to try that --hee hee.

Scanned the magazine. Reserving judgement. If they hire you as a roving reporter, I'll consider subscribing.

The picture still isn't showing for me.
I've never managed fiction I'd even share with my mother...and she says she loves me.

I can't see the picture and since I LOVE culture (or, Kulture) I'm very curious!

Iamnot--do ya see it? Kinda fun.

Anon Boxer, I figgered ya' fer a Kulture maven!! Can ya see it?

She, oh youse lucky--I'se on a plane suring the MAss--never seed it , so I'll have to catch the reruns--what did he say that ya is cottonin' to?

the ususal. be of good cheer. nevermind the BS dont let the shiite get between me and Christo etc etc etc.

Hey Pup...well, looky...ain't many interested, but fer the She-Pup I'se gonna put the links to all the transcripts on the BACK porch--links only , except for the talk to young people--an amazin' discourse--he directly addresses "darkness" --take a look.

This heah is fer Sweet She Puppy--rest of ya'll doan need to read iffin' speakin' of religion is against yore religion. Doan want no one ter worry none that Aunty is going turn the porch into a church.

SHE,
This is what I draw some comfort from: Jesus didn't walk through a village or town and suddenly every mayor and councilman was honest, Jesus didn't come into the city and
call fire down on the liars and cheats and oppressors.

Jesus din't come through a burg and suddenly everybody was cured of everythang....


What did happen is a cheat named Zaccheus did give back money he cheated is neighbors out of, an' a woman was healed of an issue of blood, a blind man (Bartimaeus) asked for sight AND GOT IT. And a servant was healed from a distance-- no immediate presence of Jesus required, because his Centurion master understood authority, and a child was raised when her daddy asked Jesus to raise her, ...

Aunty sees that those who was healed were those who *sought* Him. He didn't impose no faith or no healing an' no change of heart on nobody.

He invited them , He taught them...but he left their hearts free to choose....and that did make Him sad some times--not because he was in no popularity contest, but because He knew they would live on in confusion--being less Human than they ought a be, ya know?

So iffin' when yore Messiah walked the streets of Jericho or Jerusalem, and not ALL mended their ways, I reckon we can expect that's
how it will be in our time too--some will believe and try to live more HUMAN lives, others will ignore it. Free will.

And, innocents will be hurt by the misuse of freewill by others.

See? The plain thang is that for this to be a "perfect world" means to force people, to remove free will and turn us'uns into a bunch of puppets on heavenly strings. Not fully human, just marionettes.

TRUTH IS that today is a day of incredible blessins', chile. Youse in a free country, in the SOUTH!, in a congenial marriage, youse talented, wif' a fine dawg, a pair of chicks and the mockingbird and the brown thrasher ain't troubled wif' polly-ticks or even infernally bad mannered folks, they's happy to sing--so should you.

sweet aunty! you are right of course. i had been sorely troubled by that devil right up in the church...just like mexican painter sequerios done showed us. but chirp i will aunty. thanky much for the memory of those birds....and your kindness. i was disheartened also over at that "lair" too - and in some ways i agreed but the spirit of the thing was too prideful i suppose. my own failings reflected up on me....get pardon/give pardon. it is hard tho'.

love to you aunty!!!

I want this sculpture in my yard. :)