"Has you ever seen such a gorgeous day, Belle?"

Why good mornin' to you Spencer, ain't seen ya' in a coon's age.
Whar' ya been?


Spencer Freemont took a wee step inside the gate and looked around.

I chuckled, "Oh I see--youse got a new lady friend, and she be the jealous sort, huh?"

Spencer picked at the spent pansy blooms. "Yeah, reckon she is. Jealous as a hell-cat."

He was quiet so I waited to see what was on his mind.

"See, Belle, I wanted to ask ya' to tone down what youse sayin' in yore backporch blog.
Thang is, I reads it ,and Lulu comes up beside me and reads over mah shoulder.
We done had an episode last \evenin' over yore Obama post. She is a Dimmi-crat, see?"


Spencer, does you really wanna torment yoreself wif' a Dimmi?

Spencer, why date them desperate types? Youse good enough to get a girl who expects to go to dinner on Friday evening.

"Anyway, I wanted to bring her by to meet ya', but now she say she woan come. She say youse a
bigoted ole bat. I told her that ain't it, but she say no matter how good your blackberry cobbler is,
she woan come. She jes' doan like folks like us --I mean, except fer me. I tried to get her to jes' stroll
by and exchange a word or two wif' ya...she say, 'why bother, no matter what, I ain't gonna like her'....
sorry to say this, Miss Belle.

"Lulu, thinks it's folks like you who cause global warmin' and ya' doan drive no hybrid or nuthin'...."

I sent him on in the house to get some cobbler and coffee wif' Uncle. Ain't no point in tellin' Spencer
that the only "global warmin" is democrats in heat like Clinton and Spitzer.

I reckon I best git over to the grocery--rice prices have doubled since January, an' yesterday rice prices on the world market went up 30 %. Food inflation: Bio-fuels uses up food growin' land and Vietnam, India, Cambodia 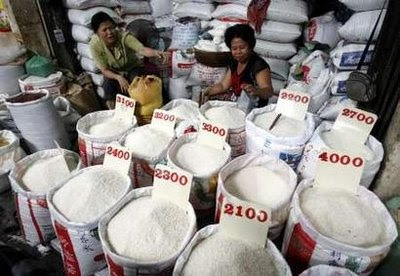 and Egypt had a panic and shut down exports when Indonesia tried to place a large tonnage order fer rice. After all, folks was in the streets --not race riots, but rice riots.

So I'se off to buy a year's worth of rice--ain't gonna pay 3.77 a pound fer rice like we pays fer gas at the pump.

GOOD LORD I HOPE rice never prices like that.
Dagdest thing, thouh, and that's quite a contradiction in our lives here in the USA, ain't it?
We say capitalism is just fine, but, put it up close on folks and they be screaming like mashed cats!
( I stepped on m'cat, once. Twas a terrible sound, fer sure!)

Then again, they's free to price as they do, eh?

Well, nevermind that about the story....that fella is lucky if'n he can find someone who'll cuddle with him, though, in my own experience, it seems like an uneven cup if one mate can tell another not to go to a place or see a person...
I personally don't jive with what you say all the time, but, i see from your words, you appear as a good woman with goodness hiding inthere somewhere. Why else would you have a front porch and a back porch, see?

But, to why I have wandered over, I sent you an e-mail and the address may go missed by your computer because I fergot to mention one other thing new with my life while you been gone.

I got the interweb stuff right here at the home!

Now, I don't know if that's a good thing or not. Remains to be seen by what comes out'a my life and living post web, eh?

Well, gotta get, now. Ain't trusting the weather folks any for a forecast because I'm darned sure their darts are dull. They really need to sharpen them things up, if'n theys gonna throw 'em at the wall to tell us the weather!(clowns might get a better forecast if'n they would throw the bones, eh?)

did you know that 47 % of women of hurled footwear at men? just a little tidbit that my son is reading to me from a book called ... well,...
the book of useless information.


so, what was this post about again...
oh...
jealous wenches .. tell him to dump her ..
nobody needs a jealous mate regardless of politics .. he might get a show hurled at him.

and i do think the production of ethanol is raising the price of foods..
not a good thing in my opinion..
surely there's a better way ..

Yeah Boneman, Capitalism is fine. the best system yet--ain't sayin' there'll never be a better sytem, but fer now, it is best. Socialism is a disaster.

The Rice Riots are becasue Al Gore and COmpany , all the global warming fakers, demand we not use oil. Oh, and Ted Kennedy doesn't want windmills in Massachusettes on account of it messes up his zillion dollar view of high price graveyard of mary jo kopechne. It ain't capitalism that is at fault--it is air-headed whackos who set public policy.

As fer a better way, we could use hydrogen fuels, could use gas--just make iit a wee more clean burning. But the Good Lord put the oil here so we would use it--and the USA has a massive ammount--in shale, in Anwar, adn in a new field we just found in Alaska.

No need to turn corn and rice and wheat fields into bio-fuels. I'd rather 5 bucks a gllon fer gas than five bucks a pound for bread.

The silly woman needs to get over herself and learn some, uh, tolerance.

It certainly is NOT Capitalism that's causing the problem. As for strong supporters of the TAXPAYER-FUNDED Ethanol and Corn Syrup disasters....

Let's give special mention to:


All Anti-Capitalist members of the traitor-democrat-party-of-filth.