The Art of Oblique Negotiatin'

Sometimes couples done learnt it's best not to be too straight wif' each other. Iffin' they wanna work thangs around to suit theyselves, often as not they learn the art of oblique negotiatin'. Won't me ter show ya how we does it?

We'uns have rule 'round heah that we doan NEVER put no political signs on the front forty. Partly because we doan wanna be egged or rolled ...

Another reason is that locally we have too many acquaintances runnin' after the same dog-catcher elected positions--half this county seems to be runnin' fer sherriff-- best to keep them aces in our hole, say Uncle.


Ha! Doan ya jes' love it when a man-folk breaks the rule he done set up in the first place?
See, the rule extends to bumper stickers on our buggy--or, at least on MAH buggy.

This is what I seen on Uncle's buggy bumper when went
to fetch the local gloom and doom sheet this mornin':

"Take them bumper stickers off" I said as
I handed him his half-gallon mug of coffee. 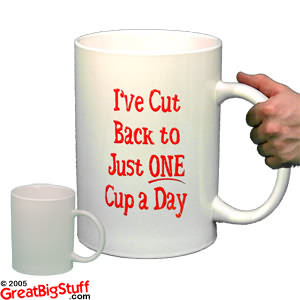 (yeah, thas' why Aunty is gettin' Carpel tunnel--it ain't from bloggin', it is from that Paul Bunyan mug.)

"Aw, shucks Belle...admit it--you laughed. Jes' the one time lemme have some fun."

Uncle: "Nope? No Fun? or nope ya din't laugh? Shore ya did. Listen, MissyBelle, you'd do well in this world iffin' ya'd jes' lighten up a tad. And wear some pink bloomers."

Uncle: "Now, Belle, this heah election season is gonna be a hum-dinger.
May as well wring a little fun from it!"

Me: "Ackshully, ya doofus,' this heah is a serious matter--
ain't NOBODY on neither side runnin' thas' worth a tinker's damn.
I cain't git no lightsome-ness out o' that."

Uncle: "Belle, is ya cussin', cause iffin' ya is then youse really vexed...wait!
Who youse callin' 'doofus'? "

Uncle: "Doan make me no dinner. Think Jake an me will go fishin'
this afternoon--may spend the night at the camp. "


Uncle mutters as he walks off toward the bird feeders,
"Polly-ticks ruints ever-thang it touches."


Now ya'll...doan worry none 'bout Uncle. He was itchin' to git on down to
the camp tonight, but he was feelin' too guilty to jes' go, since he's been thar
most weekends since huntin' season--- an' he doan wanna tell me he
is wishin' he could go, cause he thinks it will hurt mah feelin' iffin' he
doan stay round heah wif me. So I had to pick a wee lil' fuss wif' him
so he could go on down thar' wif'out feelin' his conscience naggin' him.

Besides, I got a Monday deadline and wanna finish up that BACK Porch essay
this weekend and Uncle gits riled when Aunty spends too much time on the blogs.


This heah is what is waitin' on him iffin' he ain't alert when he heads to the fishin' hole...look carefully, now. 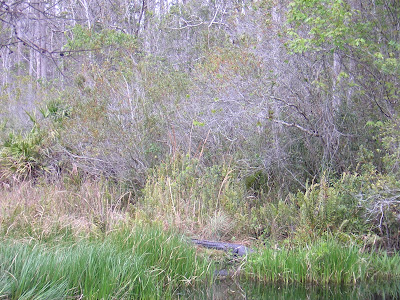 "Oblique Negotiatin'". I like it. Ought to be a chapter on it in every relationship counseling manual out there.


Now fry them fingers in the hot peanut oil until they's golden brown, drain on sheet of paper made from a heavy paper bag and sprinkle wif' salt--then serve hot as an appetizer--we uses either a sweet and sour sauce or hot mustard and honey sauce.

Now--wif the skin, make a nice pair of loafers and fine belt or two.

no moi will make a BAG outta dat crechur

She...that was funny about Moi making a handbag out of that alligator. I reckon there would be enough left over for some shoes and maybe a nice jacket too.

Aunty, you could write about paint drying and I would love it. I just LOVE the way you speak. I read all your posts with an accent. Hilarious....

Great stuff. I wonder how many fish-camp weekends were the result of "oblique negotiations" that the feller didn't even know he was engaged in.

Papa Troll told me a rule-to-live-by regarding gators:

That's a 5 footer there. Just a babe!

Oooo, Aunty, thanks so much for the recipe. Now all I have to do is have the in laws ship Moi some in.

Oh, and, a bag, some shoes, a belt, a jacket, AND a headband. One mustn't forget the headband. Or is that all just a tad to matchy-matchy? Ladies?

MOI: is the jacket short or long? If short, git the headband. Hee hee.

ALL Ya'll...what about yore own "negotiatin'" methods?

The jacket is motorcycle style short, nipped in at the waist. So I'll go with the headband, too. Just to keep it all from looking too Bridget Nielsen.

My spousal unit is one of the most direct people I've ever met. I have had to learn to keep up. Which at times is difficult, as I tend to gravitate towards "oblique."


Well, goodnes, iffin' yore S(pousal) U(nit)is direct, then ya' ain't got no need to resort to the oblique technique.

I'se gonna do a whole post on how these days ya gotta have conditional speech--ain't PC to ever say anything direct, in case the other person holds a different opinion. As in:

"Seems to me that when the sun comes up, the day tends to follow..pretty much, I guess."

Notice the use of four conditionals:
"Seems to me" and "tends to" and "pretty much" and "I guess."

I think I could go for directness.

seems to be that the mr foam and i pretty much tend to participate in the art of oblique negotiation ... i reckon .. for better or for worse ..
i guess ..

I've been taking part in "Oblique Negotiatin" for some time now...but I didn't know that's what it was called! Now that I have a better grasp on it- I will use it more properly! :)
lol-
Love the gator...and I've eaten gator (and you are EXACTLY right -it's more like pork!) and I've had Croc (in South Africa)- maybe a little leaner than gator...but not much of a difference.
Hugs Aunty :) I've been reading the back porch- I actually need to print it off so I can take it to bed with me, hubs isn't so keen on me taking the laptop to bed! lol :)
Of course, once he starts snoring (which is promptly 10 seconds after his head hits the pillow)- he might as well be dead to the world...and he doesn't notice anything at all. See..."Oblique Negotiatin" at work :)