Didn't Nobody go to the Movies Last Weekend?? 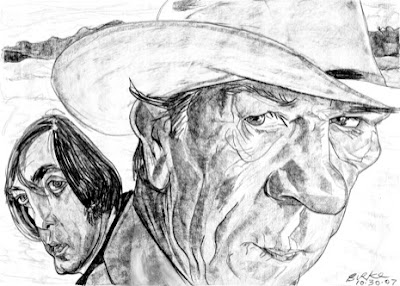 Misguided souls will tell you that No Country for Old Men is out for blood, focused on vengeance and unconcerned with the larger world outside a standard-issue suspense plot. Those people, of course, are deaf, dumb and blind to anything that isn't spelled out between commercials on dying TV networks. Joel and Ethan Coen's adaptation of Cormac McCarthy's 2005 novel is an indisputably great movie, at this point the year's very best.


"On the most basic level the movie is about hunters and the hunted, order and chaos, the fragility of civilization, and the nature of this world and us in it. There are four main characters: a world weary sheriff, a cowboy welder who makes a bad decision, an insanely competent killer with a memorable physical presence, and a landscape of big sky, deserts, thunderstorms, trailer parks, seedy hotels, dead mexicans and dusty jacked up trucks. The landscape is as critical to the intensity of this movie as the "overlook" was in "the shining".
-----

An intense, nihilistic thriller as well as a model of implacable storytelling, this is a film you can't stop watching even though you very much wish you could.


Cormac McCarthy's marvelous, throat-gripping, best-selling 2005 novel of the same name describes a contemporary American West (the action is set in 1980) where drug trafficking dirties the parched, wide-open landscape that was once home to cattle rustling. Here, where the value of honor has steadily declined, an average chump named Llewelyn Moss (Josh Brolin) is out doing a bit of unsuccessful hunting when he happens upon a huge cash haul at the scrubby site of a drug deal gone bad. And it's here that Moss makes his first wrong wager: He thinks he can take the money and run.

Lemme know what ya think.

*sigh* it snowed, so I was house bound.

THIS weekend. And I'll be back to tell you what I think.

poor aunty, lol...wanting to chaw, but having nobody to chaw with...
we were out and about in the blue hills of kentucky. we'll probably see it on dvd ... sometime or another..

The New Yorker's move reviews haven't been any good since Pauline Kael left a bazillion years ago. This movie is great. Review to follow on da Blob at some point . . .

Sorry, last weekend was training and this weekend Im at a party. Mind you, it's probably not even in cinemas over here yet. The Golden Compass is stealing all the film news over here.
Happy Holiday!

no except from SHE!!! the mighty SHE!!??? grrrerhahaha dammit i want to know what all the bloggers think too. now theres all these blog parties! i know moi and the other AB are going. and foamy? shes too outdoorsy and active to sit in a theatre for two hours! cake? er, in that outfit? her husband/lover etc will never let her out of the house! grrrhahahaha

Having mah Cake...sugar, howdy do and welcome to the Porches....party? wha'? Drag them party-goers to the movie wif ya!!

Six months after it's out on dvd, on a Thursday night after my wife and kids are asleep, my chance will come.
I'll watch it then.

actually ditto what iamnot said. i'll be asleep, the kids will be asleep and my beloved spouse will stretch out on that long sofa and watch the movie ... and probably fall asleep half way through it. or, i'll stay up with him watching the movie and he'll still fall asleep half way through it ... actually that's the more likely scenario. come to think of it, i haven't watched a movie for geared towards adults in a movie theatre in a loooooooooooooooong time.
this weekend i'm gonna watch my youngest perform in his christmas play at church.

I'll not be goin to the cinema this month but will endeavor to obtain it on dvd..Pleased to make your acquaintance...sent her by ab....

I LOVED this movie. By far the best one I've seen this year. I think I've got most of it figured out, but I think I should see it again to see if I can make more sense out of the ending. I'd go on, but don't want to spoil it for anyone who hasn't seen it but is planning to.

Hi Aunty....just popping in from AB's little shindig and wanted to say MERRY CHRISTMAS. We are on the same table so hopefully we can chew the fat and shoot the breeze at some point during the evening. Perhaps we could share a mint julep together :)