"Hey darlin'! Git on up heah and let me look ya over--Why, gracious! It seems school is agreein' wif ya!"

I said this when Big Beau Riley sauntered up on the Front Porch durin' the Days of Christmas--he were home from that fancy journalism school in the north.

"Why Aunty! Youse a sight fer sore eyes! How ya been?"

I tole him I wuz too fine fer words...and then I explained how I wuz into journalism mahself, wif' bloggin' and all....tole him how bloggin' gave us folks out heah in the hinterlands a voice...an' what did he think of the influence of the the blogosphere, now that he were studyin' journalism
official-like...din't it spell the end of the elite media an' all?

Big Beau jes' threw back his shaggy haid of black hair and howled:

"Naw naw, Aunty, it ain't no different from the old media--jes' in a new format, thas' all."

I tole him I heered that the blogosphere wuz changin' the world of journalism.

Beau jes' kept laughin'...an' when he caught his breath an' swigged down some lemonade he asked,

"Aunty, how many folks read yore blog, or anybody's blog? Now think--ain't many blogs that have a readership of a hundred regular folks--but they's millions of blogs. Doan ya see? Ain't enough folks readin' the same blogs to create any real influence--it is too diffused....it looks democratic an' all, sure, 'cause anybody can git a blog an speak his peace...but ya might as well sit on a park bench and tell whoever stops by to sit a spell wif' ya....why Aunty, you'd git more effect writin' a letter to an editor or gittin' on a call in talk show--but nope, bloggers ain't ackshully influencin' much--or leastways, no individual blogger is.

When I got over poutin' fer a spell I asked him iffin' he was studyin' about blogs in particular at that university. 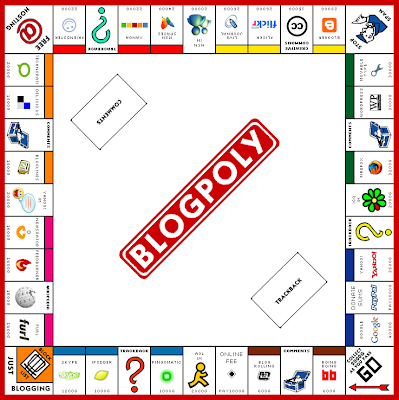 "Looky, Aunty, this is the thang ya gotta know--the blogosphere is made of humans, so it reflects human principles of organization, jes' the same as any other human endeavor whar' thousands of humans is involved. Some rise to the top of the heap--or fight they way up--defraud they way --same as of old. The ambitious or clever ones, the aggressive, the tenacious, the persistent....same as in every collective human activity--an dang few make it to the top o' the heap--the blogosphere ain't one whit different.

"The blogophere is jes' as hierarchical as any other form of human interaction--aw, mebbe it's not intended so, but it IS so, due to the nature of the technology, ya see? ...I mean the nature of hyperlink processing, search engine filtering algorithms, RSS feed, syndication, etc. It jes' naturally creates an electronic hierarchy that favors the few, not the many, not the great unwashed--er, the unread.

But most of all, human nature jes' does thangs the way it always has--ain't ya seen how it has growed into the same ole patronage system we had since man learned how to share fire?

Aunty, youse jes' a blog-peon, so iffin' ya wanna git out of the back o' the bus, ya write up somethin' lovely 'bout a famous blogger so his crawler finds yore mention of him, an he will link ya'...then fer a few days ya'll git some high hit stats...but it doan last long--the proverbial fifteen minutes of fame.

Besides all that, the old media had the bucks to hire top chatters and bloggers, corporations have their own blog sites--not all are identified as CORPORATe, either...ya' see how it's goin'?

An' ya might even be fooled into thinkin' the A-list bloggers is readin' ya or noticin', but they ain't cause they got too many other high traffic stops to make--naw, Aunty....they ain't no significant change--the little guy is still the little guy.

After a while I said I knowed that. But I ain't bloggin' fer fame, fortune or influence...it's jes entertainment and curiosity about other blog-folk. I guess thas' why most folks blog, doan'cha think?

Beau stood up and gave a little shake to his pants legs. "Yeah Aunty, I does think that. I jes' doan want ya to buy into that idea that the 'man in the street' is suddenly more influential than he ever has been by virtue of the blogs....think of it like this: Did the telephone make the average person more influential? Did the telephone mean more important stuff got said --or heard?

When he were gone, I tidied up the glasses and then sat down heah at the computer to ask ya'll...
why does we all blog?
Posted by Aunty Belle at 8:52 AM