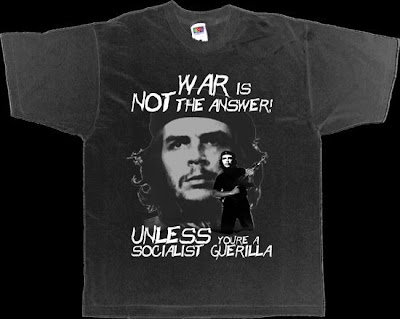 I'se noticed that some of the Mute Monday folks put up Che fer a boycott subject. Amen.

Can anybody tell be why it is that some other folks is so enamored of him? I jes' cain't grasp it, less'en its the beautiful loser syndrome.

I mean, here is a fella that even the Soviets said was an abject failure at any mission.
They didn't cut him no slack either when Che's signature on checks was "Stalin II."


An when the body count of his executions was 14,000 he boasted
to the United Nations: "Of course we execute!"

One of my young friends tells me Che stands for the idea of revolution against oppression eve'rwhar' an how he identified with the common man.

Really? Ain't that odd, since he insisted he was descended from a Spanish viceroy, and he commandeered a fine hacienda fer hisself, while the peons of Cuba lived (still do) in grass huts.

As fer opposin' oppression, that ain't what he said himself--he was committed to totalitarianism, hence the Stalin II signature, jes' a tyrant wannabe, not a liberator of the oppressed.

So often these revolutionaries are opposed to oppression only because they aren’t the ones doing it.

Che said: "To send men to the firing squad, judicial proof is unnecessary ... These procedures are an archaic bourgeois detail. This is a revolution! And a revolutionary must become a cold killing machine motivated by pure hate! We must create the pedagogy of The Wall!"

Che was a real person? Whow. I just thought he sang well in Evita. Damn.

An individual will be forgiven ANYTHING by the neo-libs if He expresses (or is thought to have expressed) Anti-American or Anti-Christian sentiment.

Hey Iamnot and Anonymous Boxer, seems I cain't find anybody to show me what the lure of Che is...dern.

Thanky for yore comments, though.

It so seem that the left is into expediency for leftist causes, but deny same otherwise. Go figger.

keep stories on the front porch

i don't know what the appeal is either..

Love those images as ruela--wow.