How Do Ya' Know When it is Time Ter Go? 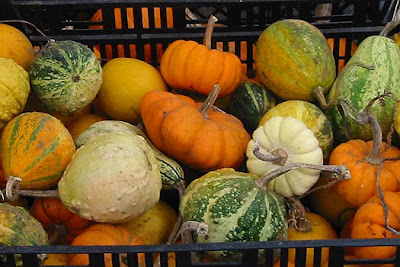 Duncan and his boy stopped by ter visit wif Uncle.

That chile' is growed into a man now, 30 somthin' and wif' his own toddler boy. Duncan talks real fine, no colloquialisms, like me an' his Mama (Who is older'n me).

He chuckled, "Why Aunty Belle, nobody would miss yore famous scarecrow making party. Suzanna has been saving old clothes all year just for this event."

Uncle got ter makin' paper airplanes fer the wee one and Duncan an Aunty settled in the rockin' chairs fer a glass of lemonade.

"Aunty, how does you know when it is time to go? "

"Go to find new friends. Some of mah friends is different now...or maybe I'm different....I don't know. We don't share the same ideas on the most important things. I still like them, but we are traveling different roads, I have to admit."

He had that far away look in his eyes that man gits when he is tryin' ter see over the hill of time.

Aunty :
Well, now, youse settled down and life is mebbe more serious fer ya' now that college days is behind ya?

"It is more than that, mam. It's like they want to live as if there were no consequences for what they do. Last week Roscoe Tanner called me up to ask for a loan. He has never given up that gambling habit and now he is in hock even on his house."

Aunty:
Didja' give him the loan?

"No mam. I did not. I feel bad for him, but he knew that I knew he would still not change his habits, so the loan would do him no good. Way I figure it, there is no good to come from my sacrifice unless he makes a change. Over the years, I have pulled him out of tough spots, but it did no good. In a week he was back at it. So, over all this time, it seems no matter how I tried, I was never any lasting good to him."

Aunty:
Darlin' life is like that. Roscoe is a long time buddy, I know that. An' it is sad ter go yore own way. But all a body can do is live by what he knows is right. Take some comfort from knowin' yore own way is an example of a better way ter go when Roscoe comes ter his senses.

" My own mama said we each must tread our own path, some pick the wrong fork and some day they will see it was a dead end," he said. "I tried to joke him into leaving the casino scene behind, but he threw back that he was in a 'free and over 21.' I didn't bother to even say that being free means free to do what's good. What is the point of using freedom to wreck your life? It's a terrible waste."

The leaves is dancin' in the tress, a bit of a breeze came up. 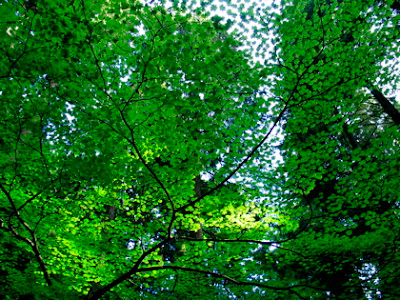 Aunty:
Duncan, mah heart aches fer ya'. It is sad ter leave the Roscoes of this world, cause he do have some good qualities. It's jes' that he doan cultivate his good side. One day he might.

"I have other friends of course, along with Suzanna ....it's just tough to leave Roscoe and his cousins--they are a funny clan and enjoyable sometimes, but you probably know what goes with gambling," he replied.

"I guess the balance has tipped and it seems to me that there is less good nowadays and more that Suzanna and I cannot stomach.

Thas' yore own answer puddin.' When the balance is not tipped toward the good, then youse gonna have ter be livin' out of balance yoreself jes' ter hang wif that crowd.

"Yes. I do see that. But I hate to see that." His jaw was workin' an' I knowed he was distressed.

After a minute or so he sighed an' I recognized it as a decision.

Aunty:
Duncan, keep yore memories of the good fun ya'll had. When it is time ter go, jes' slip on away quietly. They knows the score. An' they know whar' ter find ya' iffin' they want yore brand company. 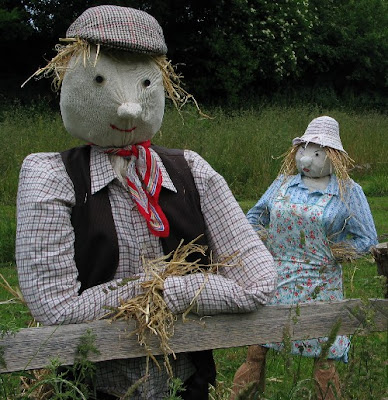 A paper airplane landed at Duncan's feet and his boy came giggling over to retrieve it.

Duncan swung the boy up onto his shoulders.

"Aunty, we are sure looking forward to your scarecrow breakfast. Will Uncle be flapping the jacks?" he laughed as he ambled down the path, his seemed somehow a bit lighter-hearted.
Posted by Aunty Belle at 5:14 AM

Hi Aunty! Sorry I have not been around this year much. Pulled my blog.

I have recently had this same worry. Hard to know when a friendship has run its course.

Dad survived his chemo. I wanted you to know.
Joan

did ya'll make those scarecrows? they are fantastic.
i never thought myself one for scarecrow fall decorations cause most folks around here find something premade scarecrowy looking from the local wally world which is then put up ... year, after year, after year.
but these here .. there's something else.

I get in trouble sometimes....

I wander into Sunday school classes and mention that they already know what they're supposed to be doing. Go do it.
I get the blank stares mostly.

Here's the thing. That the church raided the books of the bible before they were put into the one big book is the singlemost worse thing to have happened to Christianity. It's funny what some men will do when the crunch is down, eh? Some scurry into dark corners, some face off what's happenning, some just sit around drooling on themselves.

Paul went out and did work, but, the work was also writting to those he had eother seen or those he was hoping to see soon.
The letters were never expected to survive, a trait that continues to this very day. Some folks throw away their mail after they read it.
Paul probably thought the same thing.

The lies he used weren't of a serious nature, and for that, it would seem to some that I am taking him to task for it. OK, I used to say, when I die, there's gonna be a big ol' fight in heaven, cause that Paul and I are gonna go a few rounds.

Now, as for our lazy butts....
My goodness how lazy we have become. But, that's for each person to see for themselves.
And, I want you to know, I ain't no exception, either. Sometimes I paint a picture and when I sell it, I could take the money down to Wheeler's Mission (downtown Indy) and give it to them that helps folks who are broker than me (that's a hard one to believe, but, it's true) and yet, I greedily cash out whatever pittence I have gotten, give most of it to Steve (cause he's been coverin' the bills for this long period) and then I go buy m'self a box of cereal (Sugar Pops) as a congratulations fer sellin' a picture.

(For a better understanding of what I just wrote, look under three of the four gospels for the fella who asked Jesus what he could do to get to heaven.)

Anyway, for that and one other thing....how in the name of heaven can we argue over stuff that was written so many centuries ago? What? Are we nuts? (or is that, "What are we? Nuts?")

A friend told me, "if you started up in the argument, it would be rude to step out without saying something as to why" which is kind'a superfluous. (uh-oh. boneman's gettin' out the fifty cent words.) I reason that since I was always movin' as a child, what with the ol' man being in the Air Force and all, that I had learned well a few things and one of them was, we rarely change anything.
Rarely.

Did you know that Billy Graham used to preach to the rabbits and the squirrels in a local park? He did that for years.
Not one of those animals ever did do communion. Not one.
Now, as for baptism....well. It's like when everyone was in the room hiding from the romans...
the SPIRIT wandered in and put a ball of fire over all their heads. A Holy baptism, if you'll allow that, and when they stepped from the house, unafraid of romans or anybody, for that matter, they spoke in tongues. Spoke to everybody there in their own language....even those from way far away.
Spoke in tongues to them all.

Did not "jabber" in some scat....
rather told them all of the love of the SPIRIT, and Jesus and the FATHER.

'Course, at the time, Saul had no idea of this business.
Even later, after claiming to have been in tune with Jesus, he would state that talking in tongues was talking to GOD, not talking to people.
Odd, eh?

But, rather than beat an old dead horse I thought that I shuld back up and retreat.
Not scurry to some corner, mind you.
Dang!
I'm a wise "fish" y'know.
Been around long enough t'know better.
But everytime I see that worm curlin' around the hook, I bite.
And, not just the hook, but the line, too. And the sinker!
In fact, I've done it so many times in my life that I'm sure, "hook, line, and sinker," was written about me.

And, Lordy! That I'm a contrary piece of argument doesn't help any.

So, what am I sayin?
Well.
(be careful, now....)
If yer thinkin' t'teach us Islam...
y'all do realize some will go to that religion fer what you say?
And, that may be OK with the CREATOR in the long run because it doesn't really matter at all.
My guess is (and what else COULD I offer but a guess) the CREATOR doesn't care what we call our religion or what silly lil ceremonies we attach to it, just help each other.

It's just a guess, though.

Foamy, no honey, them's not our scarecrows, but we do make our own an' they's near'bout as good--I'll post the pics after we has our shindig.

Boney....Real happy ter see ya back on the Porch. I read your post a few times and there is so much in it. Iffin' you'd care to, mayhap we could have an offline discussion wif' emails?

Not that ya need to. I can see ya's OKAY wif' what ya have worked out, an ya' doan need Aunty add or subtract from yore stance.

But tell me this, what do you think on this post? What would ya say to my neighbor, Duncan?

( An how does I buy one of them paintin's of yores?)

those are great looking scarecrows. what a cool idea for an event. i might make a dogheaded scare crow....or maybe a crow scarecrow.

anyway..thinking about when to cut bait...must be something in the air ( i would say water but we dont have any .. i mean here in ATL ) no joke. had to let the garden die or face citation or jail even!

She -Pup, ain't got no water?? Oh yeah, incompetent city commissioners in Hotlanta--ya' needs a cistern like they do in Venice. I seen some rain barrels wif' hoses attached, placed whar' the gutter runs down--saves the rain that runs off the roof--mayhap enough fer your garden?