Bear not Charged with Homicide ? 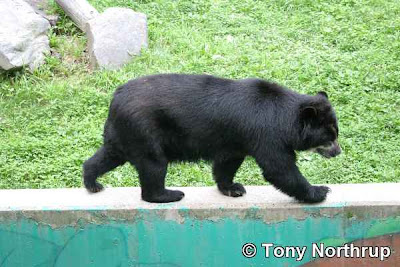 This morning, we have a story, thas' fer shure.

After the thang wif' Priscilla judgin' poor Jimmy (previous post: Scandal on Shady Lane) , the next we had was bears on the loose.

The paper reports that a fella was wanderin' in the woods and came up on a den of Florida Black Bears. The bear population has been on the swell, we's findin' 'em school yards or ya' go


out wif' ya' first cup 'o cawffee in the mornin' and find one swimin' in yore pool. (I ain't got no pool, so 'taint a worry fer me)

So, ya' can see it ain't no wonder a guy could jes' be out fer a walk and find hisself nose on ter a bear! The bear et that fella.

The Slantinel Star (local rag) reports that after an investigation, no charges was filed against the bear.

In other Bear news, a lone bear climbed up on Interstate 4 , durin' peak travel time an' got hisself struck by a car an' after investigation, charges against the driver were dropped.

One of these stories is true.
Posted by Aunty Belle at 11:18 AM

I don't know which is true. But I've never heard of a Florida Black Bear killing and EATING a healthy grown man.

But I do know that the World REALLY needs to hear Auny Belle's contrarian view of:

THE JENA SIX (against one).

Probably better suited for the back porch.

I did a Blog-Search on that and the ones I checked were even worse than the mainstream-maggot-media coverage.

i'm betting the tale of the driver who struck and killed a bear and had the charges against him dropped is the true story - but i'll have to do an Internet search to confirm. nonetheless, i fully support the bears in their quest for truth, justice, and the American Way.

Uh uh - the Jenna Six - an interesting and shocking case. I wonder AB - we will be on the same side of the fence on that one?

drivers kill so many animals on Indiana's highways and roads that we've been cited as the most dangerous state in the lower 48 (according to Possum Times, a local paper fer critters)

Any fool that would walk up to a bear (oh, isn't that cute) has got the wrong brains in place. If y'have t'feed the wild animals, just go swimmin' on the gulf side. Thems sharks is very, very hungry.

Ah, but which one?