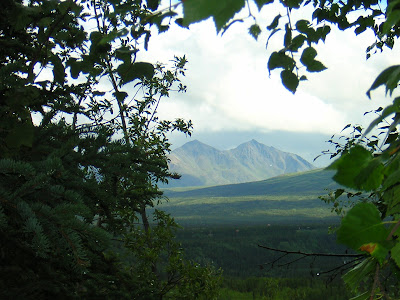 We'uns done had a week of 97 degrees and even climbed over a hundred one day.

Aunty is heat tolerant, but they is a limit. When I got in me buggy t'other day at 9 o'clock and it were already 87 degrees, I near 'bout wilted righ thar' jes' thinkin what was comin'. 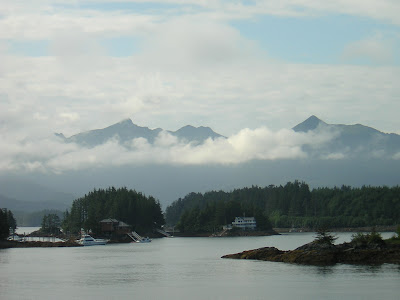 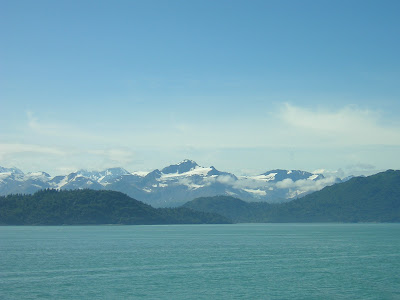 We had a youngun hangin' around that day, an' when Uncle Aloysius tole her ter look in the ice-box fer some juice she jes' stared at him....
"what's an ice box?"


(Uncle also takes his shoes to the "cobbler", the music round here is played on a "Victrola", and he "draws" a bath.)


So ter beat all this hazy heat, I been gazin' over some photos of a much cooler place--ALASKA! 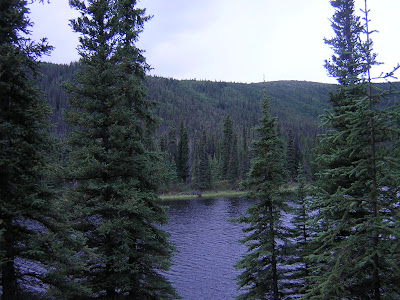 But folks, it ain't all ice in Alaska- 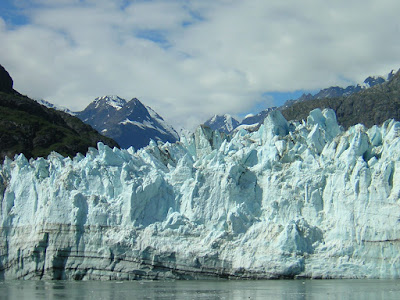 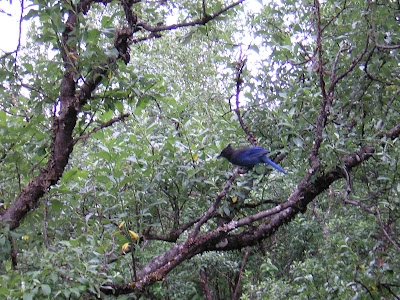 I seen some of the bluest birds on earth!

An' the bluest flowers too! 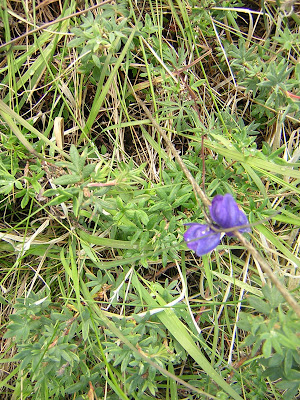 how is ya'll beatin' all this summer heat? 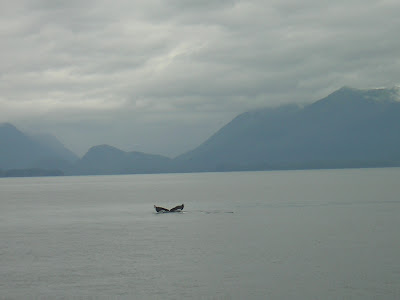 I'd be at the water park. That's the way to stay cool!

well, I'm losin' the blog and gainin' another one back! Happened so quick some doesn't even know I was gone!
HA!

Now, as fer the comp[laint of heat...
hmmmm. Lessee, here abouts we've had 90 or better fer near two weeks straight. Cotton pickin' weatherdudes (in their air conditioned studios) are gigglin' bout comin' up on a record! Next time I jear it, I'm gonna go tell them to go play it on yer Uncle's Victrola!

Those are some fine and dandy photos of Alaska!
Match them? Well, we have bluejays (more of a powder blue, I'de say) and indigo buntings which shine a flashy deep violet, but, that bird you've spotted with yer lens is quite a looker! I have no idea what it it other than beautiful.
(how big was it, anyway?)
and the blue flower? Well, I CAN match that with m'front yard, but, I 'spect it's quite a bit smaller than the one you've in your lens.
We have some of that wandering jew plant from California that pops a tiny blue flower,( oh every bit as bright, but, way tiny!) and then there's the irises, but, they don't pop again till next spring.

Love those mountains and stuff, though.

the was country, yes they was.

when she was 18, she moved to London. Can you imagine? The Beatles played up the block from where she was working as a nanny.

Hey Butterfly lady chile', how is ya'?? And yore fine little fella? Must be nearly school time for him, right?

Seems ter me that blue cools down the landscacpe--blue and white. When it is hoteer'n blazes, who wants ter look at red and orange flowers?? gimme some cool blue.

I doan know that bird 's name --or the flower--but I ain't never seen a bird like it here in the deep south. Glad youse back online, though!

Contessa, yore mama and me mayhap be 'bout the same in years, tho I ain't never pumped water. But the beattles hit Ed Sullivan show afore Aunty was into any music or signers. It is UNCLE what calls stuff victrolas and cobblers, not me! How old is ya' Sugar? I always think mah babies is about yore age.

As for "beating the heat", I eat and drink differently in the Summer and find that helps a little.

I am so jealous. I NEED to visit Alaska! Thanks for the invite, anyway. Great pictures, you should enter "Mute Mondays" the Meme at my blog.

TMI is "Too much Information" and is another Meme I participate in. I think it's:

It's been around for 96 weeks, but I just started with it. Basically, they ask silly questions and other bloggers answer.

Artfulsub, I like yore horse--I watched yore you tube clip-- that's a fine piece of horseflesh--

Yeah darlin' git yoreself to Alaska--my papa took me and I'se here ter tell ya, it were amazin'. Now Uncle Aloysius (aka Rhett Butler --thas' an old post whar' uncle was stompin' mad that I give him such a prissy name on a blog, so he renamed hisself) uh, whar' was I? Oh yeah, Uncle wants ter go now too--mebbe we could team up.

in atlanta people are not dealing with the heat well at all. i am painting, and should not be on the blogs, but the braves game on in the background and it is insane...3 people have been thrown out already. bary bonds is in the house and he got in one of the fights.. its a sloppy game too..its too damn hot! traffic is hateful and everyones face is contorted into a mask of irritation and impatience. i cant. take. it. help. please. somebody

Yeow! Pup, looky, make some lemonade , keep it ice cold, and leave some water runnin'--it'll remind you of coolness...and take a shower in talcum powder--the ole lady trick! Fergit flowers, use just greens in yore vases--cools down the room.

Naw, it is so hot--doan it make ya' admire yore forebears who lived
t hrough all this wif'out airconditionin' or even ice makers in they fridge.

just let me know when that blog summit is in alaska and the foam will be there.
i've been staying in an awfully lot which i really kind of hate. i truly love the sounds of summer...
the cicadas, crickets, birds, dogs barking (oops, nope, they're also too hot)...

AND THAT TIE OF YOUR DADDIES WAS IN STYLE ABOUT 5-10 YEARS AFTER MY MOM WAS BORN.


BUT YOU KEEP CALLEN YOURSELF AN OLD BIDDY!

Iffin' mah daddy's tie was in style 10 years AFTER yore mama was born, then wouldn't that make Aunty younger than yore mama? I'se jes' 2 years ole in that baby pic. (An' shoot--mah daddy coulda been wearin' an out of date tie---he coulda been behind times, ya know!)


Check wif' Bawgs-- he'll tell verify how much of a biddy Aunty is --or ya' could come yoreself ter the next blog summit!!

not gonna complain about the weather here. its been splendid. now if we could jest get them friggin garbage collectors to work! it sucks ... especially on them hot days ... when we all gots 4 weeks worth of garbage laying around. yes ... 4 weeks they have been on strike. grrrrrrr.

it sucks for the little ones coz it ain't jest the garbage ... its all the community centres, with all the pools, etc for the kids to play at. ok, so ... there we got our choice of ... say at least 6 beaches accessible via city transit ... so its all good, i s'pose.

its cooler here today - on 18 celcius and it looks like rain. my tomato plants are thriving ~ already picked some of me roma tomatoes and even a few beefstake ones, too. the hot peppers ... they're still growing.

enjoy your day! and the rest of the summer ... autumn will appear on our doorsteps in no time ...

Hey Foamy LAdy! --and Red--new idea: klet's all go ter Red's--her being near bout to Alaska!! we promise ter take our garbage home wif us and not add ter yore troubles...hee hee.

I just sent a note to She telling her I was day dreaming about Alaska! :)
Today I asked the kids to turn off all the lights in the house (you know I always leave a little lamp on in the bathroom and in the hallway)- and we closed all the blinds up tight- and moved very s-l-o-w-l-y...
I took a shower in the morning and cool bath in the afternoon :)
It was 105-110 with the heat index around here and no real promise of rain until Sunday :(
But we stayed cool today. Didn't get much done- except for some good reading...so, on second thought- we got plenty done! :)

No Summit planned, but if She and I can match up our schedules this fall and catch Foam (who is only 3 hours from me)- then we will try.
You, of course, are always invited to anything we conjure up :)
I promise to keep you informed.
And to come back soon- I've missed you :) School starts on the 27th- and some sort of order will return to my household :P

it sounds a l'il too hot to do anything except siesta!

its way cooler up here ... and yeay, alaska and the north is just up the coast, sorta.

....not sure of your exact location, but, I heard from a friend of mine who tells me that 114 is too regular fer North Caroliners.

So, our mere 90s or better fer as long as it was (and now over, too, I might add) was too piddly a critique of the weather about.

OK, well I hate to say it, but I think that that tie would have also been in style.... 20 years BEFORE my Momma was born, so maybe your daddy was out of style.... if you insist that you are such an ol biddy!