Take a look over ya' shoulder 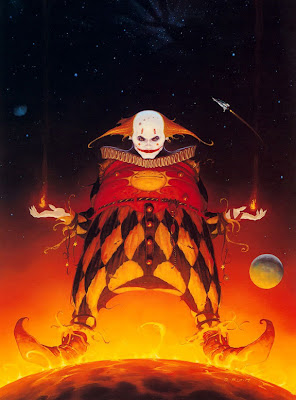 well, heLLo!....and a good morning to you too, aunty belle..

oh, that was me
foam

The artist's name is BROM.

Thanky do much CAA,
I see Brom is offering -- on his website--as a prize an all expense paid trip to Hell.

I seen this cosmic clown elsewhar' and thought it were a fine illustration fer mah own thoughts about the near future is some thangs doan change, like yesterday.

Mah own work is takin' me to the dark underbelly of thangs--iffin' youse curious, watch the BACK Porch in the next few days.
( auntybelles.blogspot.com)

If it's a dark underbelly, I'm there!

who is that a painting of aunty? the new UN figurehaid?

Have a great weekend!

Yeah, She-pup...it begins there...dark stuff is floatin' up over in Europe right now. AN' She-Dawg....did ya' know 'bout this Brom fella?

okay i looked at the work. did you see the rotted out baby with the botched hair-plug surgery? but how does it look over a sofa? *howl*

this guy reminds me of a more colorful H.R. Gieger

brom, eh? i'll have to check him out. like she. i'm not into clowns.
i do check out your backporch at times and will be looking to see what your take is on what's happening in europe. it's been 7 years since i've been to germany. i'm out of the loop.
foam

eh he, done checked him out. i wonder if hieronymous bosch were painting these days if that's the kinda images he'd be creating.
i don't think i'll be hanging his art over my couch anytime soon, although i do have to admit there is something irresistible about a lowrider horsey type 2 wheel contraption.
foam (2 lazy to sign in)..yawn..

YEah, Foamy HB is on the same themes, ain't he?

I seen some real fine Hieronymous' s in the Prado in Madrid. Both of these fellas seems real concern wif hell.

Keep a watch on the BAck Porch--somethin' is a'comin.

Dang, and I thought it was a picture of that cheney dude, laughin' bout all the money his company (haliburton) is makin' from killing our children in Iraq.

...or, is that too political?
Maybe I should work on makin' a poem 'bout him...
y'know...something softer and more digestable.

Boney, naw...doan worry,
Aunty doan choke on no liberal bones, so make no bones about it--say what ya think (only Aunty is tender eared when it comes to foul language, so please keep an ole biddy's ears in mind when ya chooses ya words. A prude I ain't, but no libertine either. Thanky)

Folks, I admit some ask, "What does that joker clown mean?"

It is my version of a cosmic clown--and he doan bode good thangs.

I'se meanin' that clown as a teaser to have ya'll look in next week on the BACK Porch, cause', as I say, we'uns need ter look over our shoulder: "Somethin' wicked this way comes"

i'm closing my blog down for the summer, aunty belle. lots of stuff to do. sometime tomorrow i'll be pulling the plug. i'll check in at times. esp. since i'm curious about your upcoming backporch posts.

oh, yes, that's me.
i have some stuff to take care of this summer. and i have a tendency to bury my head in my blog, like an ostrich might bury his head in the sand. so, i'm basically shutting myself out from my blog. but this morning i couldn't resist my routine on reading up on some on line news (ya know.. paris and all that..just kidding) and checking in on some bloggies