Shamrocks on the Porch 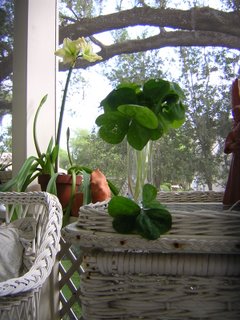 Course, most of the year, these is nothin' but weeds. But today, sweet pets, they's jes' lovely.

Did a bit o' readin on Celts today--got a fair bit of Celtic blood meself, you see (mixed with French and Lebanese). Ya'll ever hear what Caesar and Pliny said about the Celts? Said they engaged in human sacrifice and Pliny wrote of their cannibalism. Mercy, but they was an unruly tribe! That is until Patrick came along....they threw him in prison four or five times on account of the Druids didn't care for his trying to civilize 'em.

Paddy was the first to preach against slavery too (432 AD)---since the Welsh was a takin' other tribes for slaves. Eventually the chieftains sent their sons to Patrick for instruction.

Well, in honor of things Irish, I'm a playin' the Chieftains and Phil Coulter. Sure wish ya'll could hear it!

I came for theat jawbone you were hopin' fer about the joys of atheism and the burden of catholicism.

But maybe I came at the wrong time? Or wrong place?

I just couldn't remember if you said you wanted me up the front porch, or up the back porch?

Ah know you Southern gals can be a bit choosy that way.

I should be doin' my homework, but I had to rest on the porch a spell. Came in the front porch by way of the shamrocks.

I just love your home, I wish I had a home to care for insted of this crappy appartment... scuse the language Aunty.
May I have some lemonaide? I hear two eggs a day with some lemonjuice (in tea?) will incourage the metabolism.
I am also interested in HGH Human growth hormone. It comes from cows you know? Their pituitary stimulates our own.

And thanks so much for the hug. I fell better today Fo' Sho'!

I brought over some chicken soup. Made from a chicken from my grandma's farm. A stew hen... old layer mos' likely.
An the veggie are abundant. carrot wheels and chunks of celery an onion.
Enjoy Belle, I gotta run back to the desk and type.

American Psychological Association Style requirements give me a HEADACHE!!

Was that? well I s'pose I could go for a brownie on the back porch. But I do need to drop a few pounds for summer, so jes this once.. K?

I am sorry I am a bad speller Aunt, don' tell no one on me K?

Why Sir Scotsman! Do come right on in heah--we can discuss the dispirited dullness of atheisim on the Front Porch.
(real tough serious topics I save for round back, on account of cee-gars is allowed back there)

I look forward to your jawing on your joys of atheism--c'mon ahead.

BTW, part of me is from the Butt of Lewis--a forewarning of me hard-headedness.
* * *
Hey Contessa! Darlin' darlin' I am so relieved to hear that you are feelin a tad more perky--have the brownie sugar (brownie is another name for a elf, maybe even a leprechaun?) but then take a good walk--it'll pump some O2 in ya', clears the brain....help the headaches.

You jes' come rest over heah ANY time you like puddin' I will set aside a special chair for you, honey.

How does one consume those eggs and lemon? Not together??? Kelp is good for the metabolism. Is there a conenction between migraines and thyroid?

eat nothing but fresh pineapple for three days (or watermelon), fourth day eat 4 oz steak, 4 times that day (total of 16 oz), plus all the tomatoes you want. Fifth day eat only pineapple (Fresh). Sixth day grapes or watermelon all day as much as you want then baked chicken (all you want) and a green salad with 2tbs olive oil and lemon juice. 7th day Pineapple or watermelon until 2 pm, then 8oz of steak with a salad, 4 oz steak for chicken with salad for supper.

During this time it's OK to drink tea or coffee as long as you do not use sugar of cream, but better to drink water. NO JUICES.

Repeat again after 4 days of normal (but reasonable) eating pattern. If you repeat for third time wait a whole week between second and third time. 9This is not a good plan for anyone who is pregnant or nursing.)

It works--it's hard to get past first three days, but then you'll be into it and likin' it.

I believe your celtic blood has been so thinned by the other nationalities that you have forgotten the basic premise of history:

History is written by the winners to discredit the losers.

There is no evidence found by any anthropologist to indicate that ancient Celts practiced cannibalism or blood sacrifice.

The Ceasars (increasingly ruled by the catholic church) declared this as a method of subjugation of the indiginous Celtic tribes. & Used the good old renaming of Pagan holidays to force simple folk into their churches.

Some of these may sound familiar:

MayDay - celebration of fertility
Beltane - now called Easter
Halloween - has been taken from the Autumn Solstice - All Hallows Eve....

There are more but I can't remember them off the top of my head.

Oh Except that whole thing about St Pat removing the snakes from Ireland... Thats removing the Druids - who used the symbol of a serpent (which is an ancient symbol of knowledge).

Just my 2 cents worth.

Didn't mean that post to sound as cocky as it does AB.

Hey hey Bluebolt! C'mon up heah on the porch and have some lemonade (we can spike it iffin' you like). "Course you doan sound cocky--and that'd be OK, too. We can be high-spirited in our exchange.

Now darlin' note that it warn't Aunty who says that Celts were cannibals. I am old, but not quite so old as to have been an looker-on while the druids danced.

I asked if anyone had read what *Caesar and Pliny* wrote about them. Course, now, the Caesar that wrote that was *not* influenced by Catholicism as there was no Catholicism when he was writin'. Same for Pliny (The Elder and the Younger...during the Younger's time they was a sacrificing Christians on stakes, not listenin' to 'em)

So we can dismiss the idea that the human sacrifice reports about the druids was motivated by Catholicism
--not possible by virtue of the timeline. Even later, in the first cent. AD Tactius ' reported druidic human sacrifice rituals as blood drenched cannot be laid at the door of the Church as he was no believer.

And as the Romans of the time (time of Caesar, Pliny) also practiced human sacrifice (not outlawed until 93 AD) we ought to assume they a) knew what they spoke of, and b) had no particular problem with it unless, of course it was one of their own that was being sacrificed!

As for winners writing history to discredit the losers...well, puddin' don't that sound jes' like something a loser would say? Truth is likely to be somewhere's between.

MY gracious, we are seeing, these days, a resurgence of paganism and naturally we find all sorts of modern pagan apologists trying to whitewash the history of pagan Europe (all those web sources that have "magik" or crystals as their symbols) But the archeological evidence and historical evidence is solid. I mean, they's even a sacrificial victim that was preserved in a peat bog (sorry BAWGS!)in Cheshire.

We'uns, (humans) of all cultures, (ck mesoamerica, China, early Semites etc.)practiced a form of propitiation to the gods that required human sacrifice--it is universal, and pagan Europe was right in thar' with the rest.

After all, these celebrations mark realties of seasons and equinoxes. Of course these dates are kept and Christianized so that the natural human observation of harvest-time is an acknowledgment of the true Source of the bounty.

Or as in the Spring with Easter (or to your point, Beltane) -- a recollection that the order of the universe is renewal, rebirth, and that includes our own inner lives not just them new green shoots on apple trees or sweet baby lambs in the field.

The funny thang is, you know, that some of these here modern pagans ain't nothin' like the Celts (keltoi) of old, at least, not in their practices. The druids didn't write nothin down--they's afeared that their secrets would be used by the wrong sorts, you see--early Christians had that in common with 'em--that they passed on their liturgies by teaching, not writin, so as to keep the non-beleivers from twisitn' their ceremonies.

So we doan have no texts from them or their artifacts. Ain't nothing known of what they really thought--only some evidence of what they did--though not WHY they did it. (could be their "human sacrifices" was meant as capital punishmment--who knows?)

Well, anyway, the druids did not write their stuff or history down--so it's a bit of an irony that modern so-called followers of "druidry" think they are following ancient ways. We do know that Druids adn Celtic tribes set up shrines to various gods--the forest god (especially the oak tree)to the river god or the storm god or the fertility goddess...I doan reckon none of us is anxious to return to that plan.

The neo-pagan groups gets they ideas from the speculative writings of 18th- and 19th- 20th-century occultists, and /or 20th-century New Age movement. (I knows some are of are the opinion that a pretend Christian group, the Celi De, is thought to have faked they baptisms and secretly preserved pre-Christian secrets of the Celts. But those Celi De were actaully a kind of reform movement and they pushed for more ascetic values within Christianity)

Mostly these neo-pagans, they's a seeking a "natural" spirituality more in tune(they thinks) with nature and normal human inclinations. Cain't say I blame 'em--this here modern time is frought with stgress and anxiety, no wonder a body seeks some relief and
meaning.

As for me, this here ole' back is ready for relief too! Gotta get up for a spell and move around.

Thanks for the invite AB - you are a wise old bird.

You are right - my timelines are all out of whack.

I think people are searching for spiritualism rather than the doctrines of organised religion.

They's a sorta movement out theah that says all doctrinal stuff is "contrictive" and that matters of the spirit are not subject to dogma.

COurse, now, I'd be quick to say that dogma and doctrine--where it is TRUE --is the whole point of the Spirit--to lead one to truth. And ya'll knows Aunty is of the mind that truth is not relative, can be known, and has a claim on us all.

But to the larger point you make--people are spiritual and need to have an expression of that--we are body and spirit, fer shure!