When Despair for the World Grows in Me


Wendell Berry is a poet y'all must make haste to know--besides, what's not to love about a fella who lives on a farm in Rabbit Hash Kentucky?? 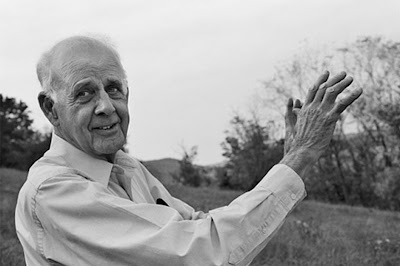 An' another besides-- the fella be a true agrarian. Berry books on mah shelf:

Another Turn of the Crank (Short and powerful essay on proper use of land an' the importance of community)
The Unsettling of America
The Way of Ignorance
Sex, Economy,  Freedom and Community
Jayber Crow (novel)
Hannah Coulter (novel)
Standing by Words.

Reckon pollyticks wuz rubbin' me raw t'other day so I dipped into Berry fer relief  an' brought up this prize:
When despair for the world grows in me
and I wake in the night at the least sound
in fear of what my life and my children’s lives may be,
I go and lie down where the wood drake
rests in his beauty on the water, and the great heron feeds.
I come into the peace of wild things
who do not tax their lives with forethought
of grief. I come into the presence of still water.
And I feel above me the day-blind stars
waiting with their light. For a time
I rest in the grace of the world, and am free. 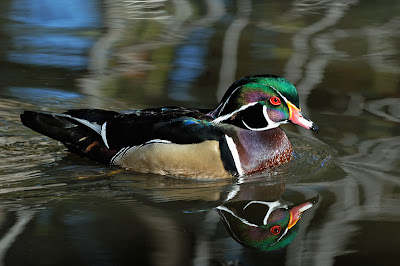 "I come into the peace of wild things" - I like that.

I posed a question to him, at a reading and question and answer, about one of his books once. I asked if he liked his lead character, the barber if you recall? Oddly, he couldn't answer the question. I tried to explain that even unreals are quite real, at least in my mind, in there own way. But he just couldn't... jump that hurdle. He just hung on that question as if I had asked if blue was the new feather or something. A strange fellow... well... one of us.

this made me cry. And I've copied it so I can read again. and again. xoxo

He is wonderful! Actually he reminds me of Chickory. And my plumber who "gets in the creek" every Friday with his six pack. In this day and age people who remain centered on the real world are havens.

God bless you Aunty,
don't let the despairs come calling on your Porches.

I'm always walking that fine line between pull-the-trigger outrage and optimistic belief in the essential goodness of the world, so this is a nice reminder of which side of my personality I need to let win out more often.

Thank you. I've been wringing my hands over the election and the events of Benghazi. Just the salve I needed for my soul.

"I rest in the grace of the world, and am free"

I have always taken solace in nature when the world gets all insane.
I think I may spend most of Tuesday at Niagara Falls.

Lovely! A prize, indeed! Re this election, I have been much more emotionally involved this time round than ever before. Got to where I had to make myownself stop reading a whole lotta stuff afore I come down with a permanent case of the heebie jeebies.

Have to remember to tell the young'un about Rabbit Hash. He gets a kick out of amusing place names.

Lovely poem, Aunty! And Rabbit Hash is just down the road a piece from me. On this election eve I am reminded that for many years Rabbit Hash has elected dogs (as in canines) as mayor. Seriously.

Hope you are well!
xoxo, eggy